The XC90 is a five-door midsize luxury crossover SUV with front-wheel drive or all-wheel-drive. The first generation had two rows of seats and launched in 2003; the second generation launched for 2015 and offers three rows of seats. The XC90 is currently available with a turbocharged four-cylinder engine, a supercharged and turbocharged four-cylinder engine or a plug-in hybrid model. 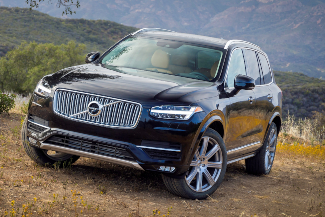 The second generation of XC90 hit the United States market for the 2015 model year, and Volvo expected that market to take at least a third of the XC90's global sales.

This model bears almost no resemblance to the previous generation; it was the first new model from Volvo under its new Geely ownership and signaled an unofficial rebirth of the Volvo brand.

Now built on the SPA platform, the XC90 is a seven-seat SUV. It's longer, wider and lower than the previous generation. The wheelbase was now 117.5 inches with an overall length of 194.9 inches, plus a width of 75.7 inches and a height of 69.9 inches. The curb weight was between 4,581 and 5,165 pounds depending on trim, drive and engine.

The base engine for this generation is the T5, a 2.0-liter, 250-horsepower turbocharged four-cylinder paired with an eight-speed automatic transmission. There are two optional engine choices. The 316-horsepower T6 is both supercharged and turbocharged and comes with an eight-speed automatic transmission. The T8 plug-in hybrid uses the same engine plus an electric motor for 400 total horsepower. Its all-electric range is 13 miles.

The new generation of XC90 has a redesigned chassis, which now featured a double wishbone front suspension. The interior was also restyled and included a range of new tech, including a nine-inch tablet-style touchscreen in the console. It controls the infotainment system and various features for the climate control.

Safety for this generation continued to be top-notch as it again scored five out of five 'Good' ratings from the IIHS. The National Highway Traffic Safety Administration gave it an overall five stars and five stars in every individual category except rollover where it received four stars. This XC90 generation again featured safety equipment like lane-keep assist, lane-departure prevention, pre-collision braking and adaptive cruise control.

The XC90 is available in three trim levels for each of the three engine types (T5, T6 and T8). The trim levels are Momentum, R-Design and Inscription.

An 'Excellence' trim is the top model, starting at over $100,000 and offering the T8 powertrain as standard. It also includes a high-end Bowers and Wilkins sound system, crystal gearshift knob, massaging front and rear seats that are also heated and cooled, air suspension, 21" alloy wheels and a panoramic moonroof. 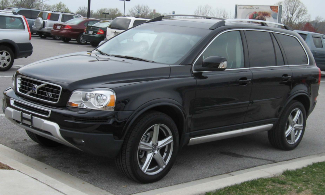 The XC90 was Volvo's first foray into the SUV market and it launched in the American market for the 2003 model year. It offered two trim levels to start with: the 2.5 T and the T6.

The 2.5 T was the base trim and it featured a 2.5-liter turbocharged inline five-cylinder engine that made 208 horsepower. It was paired with a five-speed automatic transmission. The T6 engine was a 2.9-liter turbocharged inline-six that put out 268 horsepower and was paired with a four-speed automatic transmission. The 2.5 T offered standard front-wheel-drive but a Haldex Traction AWD system was optional. The T6 only came with AWD.

For 2005, a Yamaha V8 engine became available as an option. It was a 4.4-liter unit that put out 288 horsepower initially; it was later revised to put out 311 horsepower. The 2003 model won Motor Trend's Sport Utility of the Year and also the North American Car of the Year award. In 2007 Volvo gave the XC90 a facelift that included a redesigned front and rear, plus a revised interior. A 235-horsepower straight six-cylinder engine replaced the previous inline five-cylinder as the base engine for the American market.

Volvo continued to refine the XC90 after this.

In 2009, Volvo made minor exterior and feature upgrades. The 'VOLVO' lettering was also upgraded. A 2010 update included yet another new logo on the front grille and also optional body-color wheel arches, which was previously only an option (base models had dark plastic).

Concerning safety scores, this generation received 'Good' ratings by the Insurance Institute of Highway Safety in five out of five categories. The XC90 has a range of safety features built into the vehicle to protect against a crash. The front end has crumple zones and is designed to deflect pedestrians to the hood of the vehicle as opposed to underneath it. The roof is reinforced with high strength steel to keep it from collapsing in a rollover. It was awarded the Top Safety Pick distinction by the IIHS.