The XC60 is a five-passenger compact luxury SUV from Volvo. It's available in front-wheel or all-wheel drive. The vehicle is in its second generation as of 2019. It currently slots in Volvo's lineup between the smaller XC40 and the larger, three-row XC90. It competes against the Lexus NX and RX, Acura RDX, Mercedes-Benz GLC, BMW X1 and X3, Audi Q5 and Infiniti QX50. 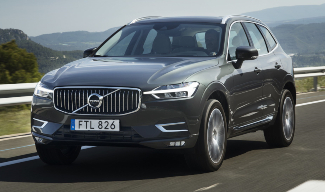 This compact crossover was completely redesigned for the 2018 model year for its second generation.

The newest XC60 shares most of its chassis design with the larger XC90 as well as other Volvo models including the S90 sedan, V90 wagon and V90 XC wagon variant, S60 sedan and V60 wagon. Most of these models also share powertrains.

This was the first generation of the XC60 model to be designed and built under Volvo's new Geely ownership, the Chinese automaker that bought Volvo from Ford in 2010.

All XC60s in this generation were equipped with an eight-speed automatic transmission. The T5 and T6 were both AWD and the T8 split power with the electric powering the rear wheels and the gas engine the front.

The three trim levels in this generation were the Momentum, R-Design and Inscription. Some standard features across trims included a panoramic roof, rearview camera, leather seats with power adjustment and SiriusXM satellite radio.

The Momentum was the base trim and offered standard features such as 18-inch alloy wheels, two-zone climate control, an eight-inch info display and specially-treated aluminum interior trim called Iron Ore. The other available interior trim was called Linear Lime Wood.

The R-Design trim features a sporty exterior with accents like a blacked-out grille, more muted detailing and neutral interior design. The info display in this trim is 12.3 inches and includes navigation. Other standard features include keyless ignition and a power-assist liftgate. 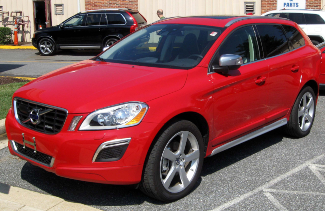 The first generation of XC60 debuted in North America for the 2010 model year and it quickly became Volvo's best-selling vehicle.

As a five-door CUV, the XC60 was built on the Volvo P3 platform; this generation also shared some technology with the Land Rover Freelander when both brands were owned by Ford.

The AWD version of the 2010 XC60 offered two engine choices: the turbocharged 3.0-liter that made 281 horsepower or the 3.2-liter inline-six putting out 235 horsepower. Both were paired with a six-speed automatic transmission.

Safety ratings for the 2011 model AWD by the National Highway Traffic Safety Administration were five stars almost across the board except for the rollover category where it scored four out of five possible stars. Scores from the Insurance Institute for Highway Safety were similarly strong with four out of four Good ratings.

The XC60 was updated for the 2014 model year. The exterior was slightly restyled in the front, and the interior got new trim accents.

The most significant aspect of this redesign was in technology. The AWD system was revised to improve handling and cornering. T6 models also got faster shifting ability in sport mode.

At this point, the X60 had three trims, which came with different engines.

The base, 3.2 trim offered a 240-horsepower, 3.2-liter inline six-cylinder engine with a six-speed automatic transmission with a manual shift mode.

The T6 trim included a 3.0-liter turbocharged inline-six with 300 horsepower, plus standard AWD and a six-speed automatic transmission with manual shift mode.

The top trim was the T6 R-Design; it had the same engine as the T6, but it was tweaked to make 325 horsepower. A six-speed automatic and AWD were standard. Available trim package options included the Premier for the 3.2, the Premier Plus and the Platinum.