The Volvo XC60 is the latest release in the second generation of Volvo's XC60 compact luxury crossover SUV line. Sandwiched between the larger XC90 and the smaller XC40, the XC60 packs two rows and five passenger seats into a compact SUV body designed for modern comfort and competitive performance. The Volvo XC60's extensive selection of standard features, a wide variety of powertrain options, an aesthetically-appealing design makes it an alluring option when compared to other luxury crossover SUVs such as the BMW X3, Mercedes-Benz GLC, Acura RDX, and Audi Q5. The Volvo XC60 comes in four trims — the Momentum, R-Design, Inscription, and Polestar Engineered — each with its own list of features and aesthetic add-ons.

New on the 2019 Volvo XC60 is a front-wheel-drive model priced lower than its all-wheel-drive counterparts. There are several new standard package changes for the 2019 XC60, such as a faster processor for the Sensus infotainment console, as well as new options like an improved Harman Kardon premium audio system. Like all of today's Volvos, the XC60 features a useful engine idle-and-start system can be deactivated and kept off as a default setting. All XC60 models use an 8-speed automatic transmission. The Volvo XC60 is an excellent choice for those who prioritize modern comfort that doesn't cut corners on smooth SUV handling.

As far as overall dimensions go, the Volvo XC60 is on the smaller side for luxury midsized SUVs. However, it has generous cargo space (see detailed measurements in our Utility and Practicality section below). With all seats up, the XC60 seats five comfortably. 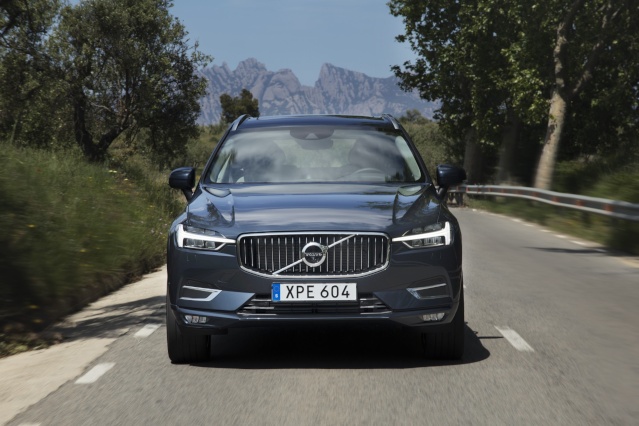 Appearance-wise, the XC60 resembles the larger XC90 with sturdy tough-yet-elegant lines and a unique silhouette. The exterior appearance differs between trims, with the R-Design showcasing a slightly more aggressive look that features a glossed black grille as its centerpiece, with hammerhead-shaped headlights flanking it on either side. All Volvo XC60 models are 15.4 feet long, with curb weights ranging from 3,888 to 4,716 pounds. Wheel options include the standard-issue 18-inch 5 Y-spoke silver wheels found on the Momentum, the 19-inch five double-spoke matt black diamond-cut alloy wheels on the R-Design, the 19-inch 10-spoke black diamond -cut alloy wheels on the Inscription, and the 21-inch 5 Y-spoke black polished forged alloy wheels on the Polestar Engineered. 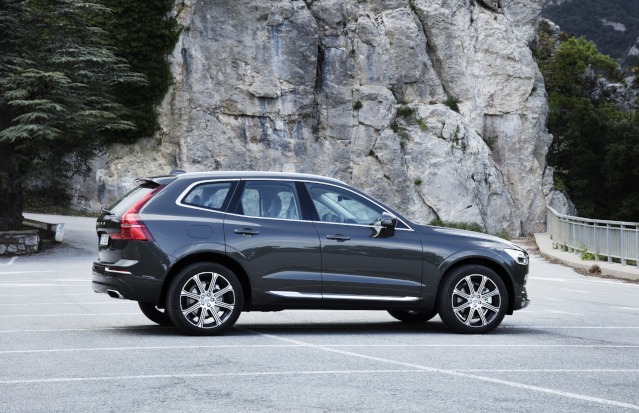 Embodying luxury at every edge, the interior of the Volvo XC60 comes with a myriad of standard and optional features designed to improve the experience for driver and passengers alike. Riders describe the XC60's as similar to that of the XC90's, both of which hold to the distinctly "Scandinavian feel" found in many Volvos. Contributing to this aesthetic is an unmissable ribbon of woodgrain that courses through the middle of the dash. 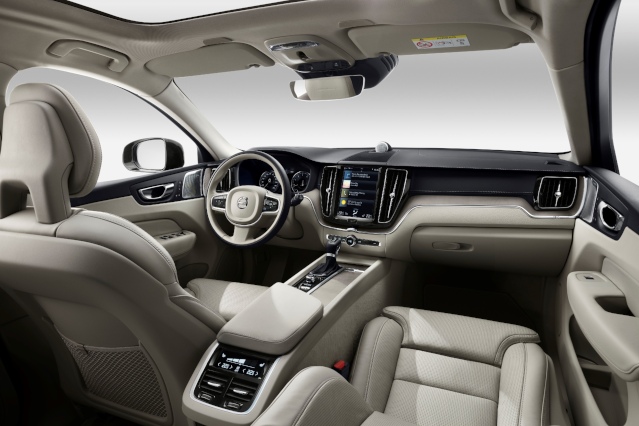 Above the steering wheel are clearly-readable meters with a driver-information flanked by a speedometer and tachometer. At the center of the dash is a sizeable Sensus infotainment system featuring an upgraded processor and a 9-inch touchscreen display. Much like the display screens Tesla vehicles — and unlike the display screens in other luxury midsize crossover SUVs — the display screen in the XC60 is oriented vertically. Buttons are intuitive and well-made, and Bluetooth connectivity is seamless. A fully digital, 12.3-inch TFT instrument panel is an option on Momentum models, while standard on all others.

Seating in the XC60 is designed with comfort in mind. The driver's seat and front passenger seat feature superior adjustment and support, with 10-way power adjustments and dual climate control upfront. The rear-seat area can comfortably fit three adults and still have enough room for a sizeable amount of cargo in the back. The majority of XC60 models feature genuine leather as an option, (and it is by far the most popular option for drivers), though it is not standard. New to the 2019 XC60 is the Leatherette material available in base Momentum trims.

Standard on all XC60 models is a panoramic moonroof, which contributes significantly to the luxury atmosphere of the interior. Optional interior features include onboard navigation and an upgraded new Harman Kardon premium audio system. Top-of-the-line Inscription and Polestar Engineered trims also feature driftwood inlays and quad-zone climate control.

In line with its wide range of comfort-centric features, the Volvo XC60 also offers a host of tools and design innovations designed to optimize the user experience. Given its overall size, the XC60 has generous cargo space at 22.4 cubic feet with the back row of seats up and 63.3 cubic feet of space with them down. (The latter is one of the best cargo area metrics in the crossover SUV class.) Optional roof racks may be added for additional cargo-carrying capabilities. 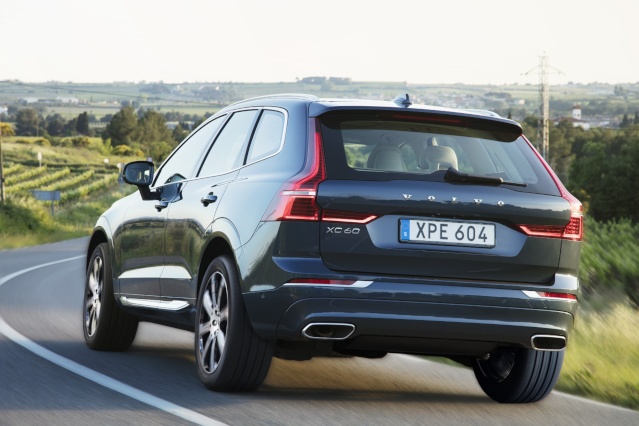 All three available engines on the XC60 can tow up to 3,500 pounds, great for small trailers or recreational vehicles. To make loading and unloading easy, the XC60 features a powered, hands-free tailgate. Other user-friendly features include an available foldable tow bar, active chassis with air suspension, and Trailer Stability Assist.

The 2019 Volvo XC60 features a myriad of modern technology and infotainment features designed to optimize both comfort and overall performance. Users report excellent build quality in the dash and consoles, as well as satisfactory interior finishes and seating fabrics, the latter of which includes the perforated Nappa Leather upholstery on top Inscription models. Though the vertical infotainment screen is a bit of a departure from traditional infotainment systems, most users report the center infotainment system to be quite intuitive. The dash layout is minimalist and mostly operated through the centrally mounted touchscreen, which may be unusual for drivers used to many buttons and knobs. 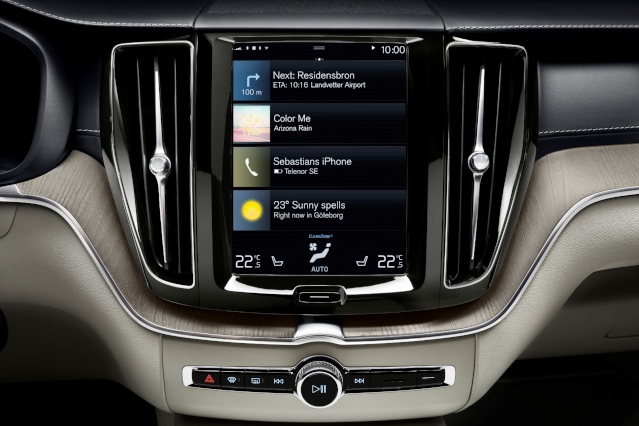 In addition to the standard safety features on the Volvo XC60, all models have a host of optional safety features to improve peace of mind for drivers further. Most notable among the optional safety features available on the XC60 is Pilot Assist, Volvo's semi-autonomous system that provides helpful driving support to help a driver keep the XC60 centered in its lane and safely spaced behind the vehicle in front of it. Additional optional safety features include blind spot monitoring plus steering assist, rear cross traffic alert, rear collision warning with braking, front and rear parking sensors, active park assist, distance alert adaptive cruise control, onboard heads-up display, and a 360-degree camera.

As is customary with Volvo vehicles, the 2019 Volvo XC60 earned the honor of 2019 Top Safety Pick from the Institute for Highway Safety (IIHS), earning "Good" scores on all safety metrics aside from Headlights and Child Seat Anchors (Latch) Ease of Use, both of which earned "Acceptable" scores. The XC60 also received a rarely-given "Superior" score for its Front Crash Prevention performance. According to data from NHTSA, there have been two safety recalls for the 2019 Volvo XC60: one for a small software feature in the Vehicle Connectivity Module (VCM) and one for the hybrid XC60s featuring AeroVironment electric vehicle TurboCord and TurboDock/TurboDX charging systems.

Front-wheel drive (FWD) is now available on all T5 models, giving drivers a cost-effective option in the 2019 XC60 line. Models with T6 and T8 engines have all-wheel drive (AWD) standard. All Volvo XC60 models use a refined and smooth 8-speed automatic transmission.

Out on the road, the Volvo packs a punch only achievable with turbocharged (and, in the case of the T6 and T8, supercharged) engine. Users describe the T5 engine as "zippy," the T6 as an accelerating phenom, and the T8 as incredibly powerful given its environmental friendliness. With multiple drive modes, including a special individualized mode, the new Volvo XC60 can quickly be set to handle sporty settings, comfort-oriented cruising, fuel-efficient driving, and even off-roading. The latter is optimized by an available Four-C Active Chassis or a Sport Chassis.

Historically, the Volvo XC60 has been on the more expensive side when compact luxury crossover SUVs. However, this has changed in 2019 thanks to the front-wheel-drive T5 Momentum model. This new base model has a retail price of just over $40,000 (including destination), nearly $2,000 less than the 2018 base model for the Volvo XC60, which came with all wheel. As expected, moving up to higher trim levels such as the R-Design, Inscription, and Polestar Engineered with increase the price by thousands at minimum. For example, a fully-featured XC60 T8 Inscription is priced at just over $60,000. However, as the T8 is a plug-in hybrid electric vehicle (PHEV) that qualifies for $5,000 federal tax credit, owners may be able to take advantage of local and federal EV incentives.

Generally speaking, Volvo's XC60 prices sit squarely in the middle of Japanese luxury SUVs such as the Acura RDX, Infiniti QX50, Lexus NX and those of more-expensive European automobiles such as the Audi Q5, Mercedes-Benz GLC, and BMW X3. Given the track record of reliability that comes with the Volvo name, the Volvo XC60's resale value is expected to hold up well in coming years, notably outstripped only by that of the Audi Q5.