The 2019 Volkswagen Jetta is a compact car which is currently in its seventh generation of production. It was fully redesigned in 2019, now based on the same platform as vehicles like the VW Golf and Audi A3.

Not only is the 2019 Jetta mostly new, but it is also offered with more standard features and more safety technology than the previous model, despite having a lower starting price.

The Jetta has been available in North America since 1980 and is one of the best-selling vehicles of all time. It has always been a great example of basic, efficient, affordable transportation.

The all-new Jetta is a welcome sight as many reviewers and the public alike believed that the previous generation Jetta was almost too basic. Affordability does not mean that something needs to feel cheap, and Volkswagen proves that to be the case, offering the most refined, feature-rich, and safe version of the Jetta ever.

The 2019 VW Jetta has taken a considerable step away from what many would consider traditional Jetta styling of the past. Physically, the Jetta is also larger than its last generation, a trend that has continued for years. 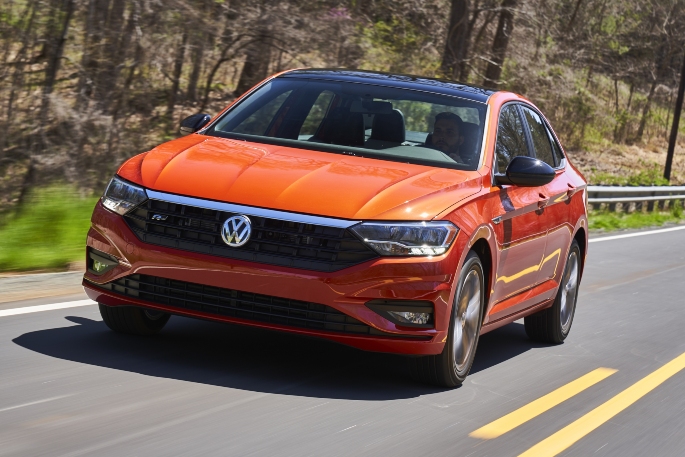 The overall styling of the Jetta is conservative when compared to many other competitors. There is a general lack of sharp lines, oversized grille openings, or unnecessary form over function decisions. It looks like a reasonably traditional small sedan, a refreshing change of pace from many vehicles today.

The front fascia gives the Jetta a handsome and refined look. Its headlights provide a line that carries through to the grille and extends downward, giving the Jetta a laid back appearance. The grille is not overly large but is large enough to be the center of attention. Horizontal grille slats provide a flat appearance with a no-frills design.

The rear of the Jetta is similar to the front. Compared to other modern vehicles, the taillights and rear design are relatively conservative and nicely proportioned. The integrated rear tailpipes also give the Jetta a touch of class.

The Jetta’s windows are generously sized when compared to some modern sedans. Its beltline does not rise as sharply as in many other vehicles, helping the interior feel more open and spacious. The Jetta does not try to mimic a coupe in its appearance as with many other sedans. 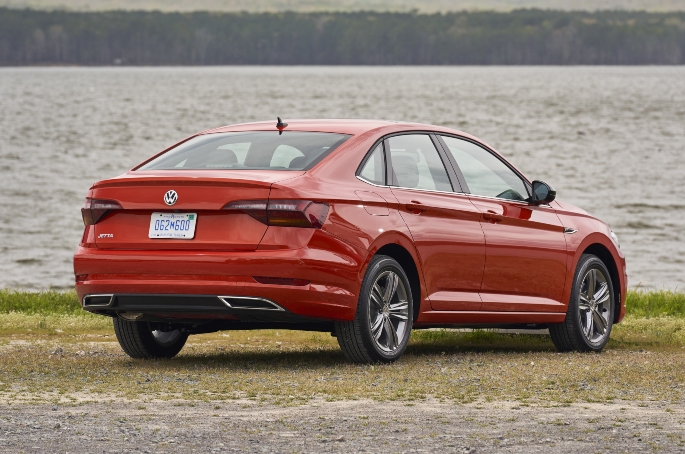 The base model comes with 16-inch wheels, but they are alloy wheels rather than steel wheels, a feature that comes with many other base model vehicles. Various 17-inch wheel designs are offered on higher-end models.

Most reviewers agree that the new Jetta has a much more upscale interior than the previous generation. But they still notice that many hard surfaces are present with plastic in many places it probably should not be used. Fit and finish are noted to be only average for the class. Still, most agree that interior quality is much better than the outgoing generation. 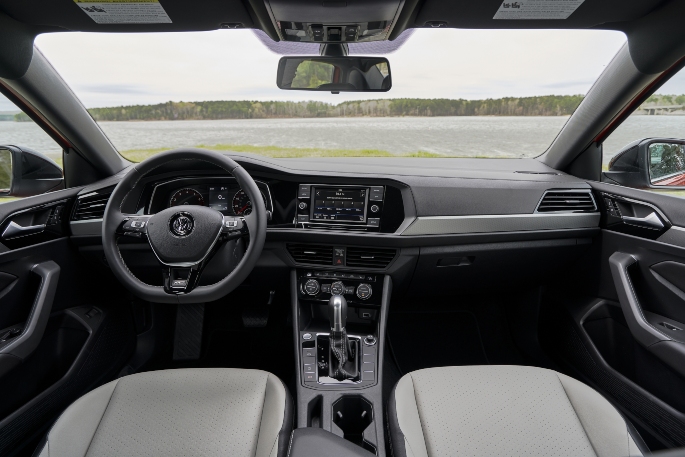 Leather and leatherette-covered seating are both available, bringing up the interior quality points awarded by reviewers. But cloth upholstery is standard on the base S.

Despite not boasting superior interior refinement, most reviewers agree that comfort levels make up for some of the missing quality points. Seats are noted to be comfortable and supportive, and cabin noise is said to be kept to a minimum.

Except for some front legroom shortcomings that some taller testers encounter, interior space is reasonable. Rear legroom is more than adequate and headroom is acceptable for the class.

One of the most significant advantages the interior of the Jetta provides is driver seat adjustability, which provides a great seating position, according to almost every Jetta reviewer. 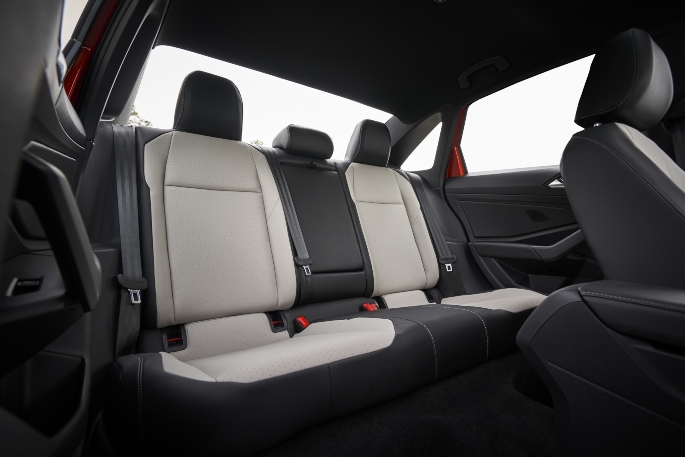 Jetta utility and practicality are both better than average overall.

Even though the trunk space has been reduced by about two cubic feet for the new car, liftover height is low and the load floor is flat. The trunk opening is vast, and the rear seats can be folded down to provide an opening for wide items. 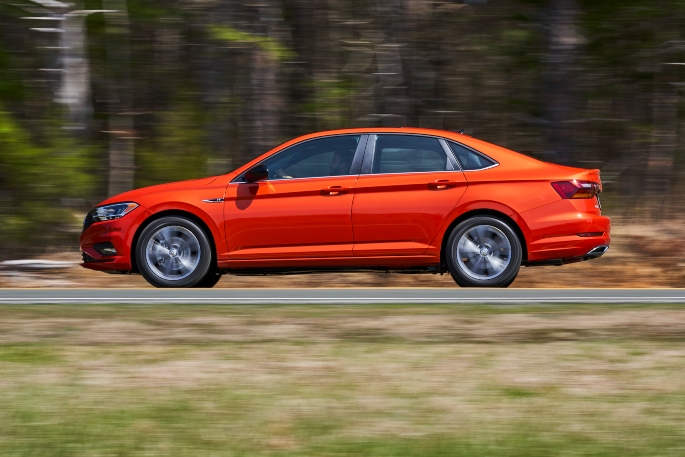 Getting in and out of the Jetta is an easy task, according to reviewers. Many note that the doors are short enough to allow for easy entry and exit in tight parking spaces, a plus for any family.

Reviewers are also pleased with the vast amount of small-item storage throughout the cabin. For additional storage or usefulness in a more adventurous setting, VW offers several accessory items to accommodate bulkier items for vacations or trips to the campground. These include roof rails with several storage systems and cargo baskets.

Visibility is noted by reviewers to be good, with small windows integrated into the C-pillar for additional blind spot assistance. 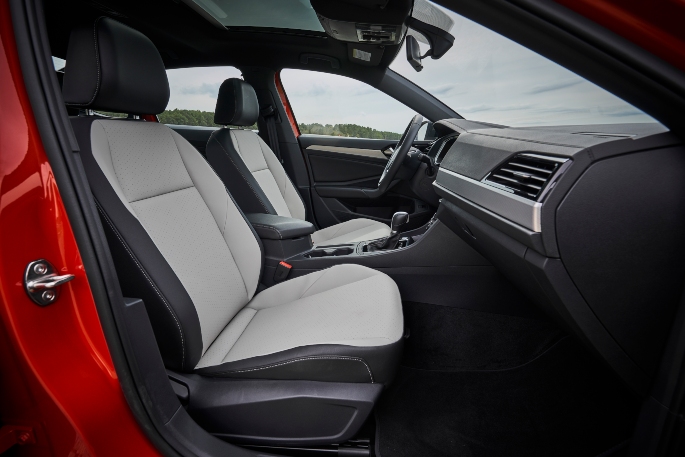 As with most other small sedans in the class, the VW Jetta is only available in front-wheel-drive, preventing it from inspiring the same levels of confidence as the Subaru Impreza in adverse weather conditions.

Technology and infotainment features are much improved from the previous generation Jetta. 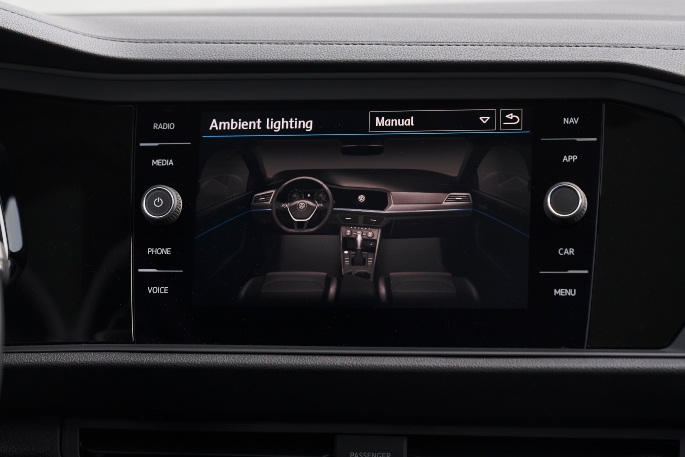 Many reviewers love the infotainment system for its easy-to-use controls and interface, but most do not find the steering wheel controls helpful or easy to use. They note that the base audio system does not produce a quality sound, but that the upgraded Beats system is one of the best-in-class. Most reviewers prefer the upgraded tech features the higher-trim Jettas have to offer in favor of the base features.

Safety and driving assistance features have also been improved over the previous generation Jetta.

The 2019 Jetta provides a mixed bag of driving impressions. Reviewers enjoy the overall handling characteristics of the Jetta, but they also agree that the lack of steering and braking feel detract from what the Jetta is truly capable of doing.

It is offered with the choice of two engines, with transmissions depending on the regular Jetta line of the performance-oriented GLI.

The 1.4-liter turbocharged 4-cylinder engine produces 147 horsepower and 184 lb.-ft. of torque. It can be paired with a standard 6-speed manual on the S transmission or an 8-speed automatic transmission that comes as standard on all other trim levels of the standard Jetta.

At baseline, reviewers of the Jetta note that its handling is competent through cornering. Most are pleased with its athleticism with some reviewers even placing it on par with Golf GTI hatchback handling characteristics. Good low-end acceleration is a direct result of typical turbocharged torque, making it feel faster than it is.

Reviewers note that the turbo four quickly runs out of steam when pushing for more high-end acceleration.

Most reviewers agree that both a lack of steering feel and uninspiring braking take away from the confidence the Jetta could potentially inspire. Though both of these characteristics aid in overall comfort and ease of driving, the Jetta limits itself to commuting and city driving for an enjoyable driving experience.

The Jetta GLI takes many steps to rectify the non-inspiring feel of its less powerful sibling. Reviewers note that the suspension upgrades, better steering feel, and the additional power provide a much more engaging driving experience than the other Jettas. A standard six-speed manual transmission and distinctive interior accents also liven up the Jetta GLI. A sub-six second 0-60 mph time provides the acceleration lacking in the Jetta’s other trim levels.

The Jetta is a standout amongst its peers when it comes to fuel economy, even though the segment is mostly geared toward efficiency.

The Volkswagen Jetta presents an average value to would-be buyers. Though most reviewers agree that higher trim level Jettas provide a better value than lower-trim level Jettas, the base model Jetta does not offer as many features or standard safety equipment offered on several other competitors’ base models.

The Jetta excels in fuel economy, comfort, and in-town drivability. Most reviewers agree that there is ample room for passengers, enough cargo space for average trips, and is comfortable enough for a family, even on long road trips.

It is also a safe vehicle, available with many modern convenience and technology features on higher-level trims – if buyers are willing to pay to get all of it.

If the most beautiful materials, best performance, and most modern styling are priorities, the Jetta will present less of a value. Additionally, the base Jetta lags behind some competitors in feature and safety offerings.

The Jetta GLI will appeal to performance enthusiasts, but it also comes at a higher price, and the Golf GTI is generally considered to be the better performance option.

The VW Jetta comes with five different trim options with the Jetta GLI containing its separate trim levels within the GLI lineup:

The base model Jetta S comes standard with a six-speed manual transmission and starts at a base price of $19,640 with a destination fee of $895 included. Opting for the eight-speed automatic transmission is an $800 option.

The Jetta SE starts at $23,290 with destination fee included.

The SE trim adds everything from the base model S and the Driver Assistance package, along with a sunroof, leatherette upholstery, dual-zone climate control, keyless entry, push-button start, a leather-wrapped steering wheel, and heated front seats.

The Jetta R-Line starts at $24,140 with destination fee included.

It is not that different from the SE in terms of features, but it does add Volkswagen’s XDS electronic differential lock for better cornering performance. Distinctive exterior and interior trim are also included, along with 17-inch alloy wheels.

The Jetta SEL starts at $25,590 with destination fee included.

In addition to a built-in navigation system and driver's seat memory functions, the SEL Premium adds every option available on each trim below the SEL Premium, including the Cold Weather package features.

Fully-optioned, a Volkswagen Jetta SEL Premium can cost just under $30,000.

The Jetta GLI is marketed almost like a separate vehicle than the other Jetta models. It has its distinct trim levels, and its upgraded 2.0-liter turbocharged engine, detail changes and suspension upgrades.

All GLI models come standard with a six-speed manual transmission and offer a seven-speed dual-clutch transmission as an $800 option. The GLI models also come with independent rear suspension, rather than the torsion beam in the standard Jetta, and more robust brakes.

Additionally, Jetta GLI models come with special exterior and interior styling such as unique trim, red-accented interior and exterior pieces, and black grilles and vents rather than chrome trim pieces.