Powertrain: 147-horsepower, 184 lb-ft of torque, 1.4-liter, turbo four-cylinder engine is standard. On the base S model, it's paired with a 6-speed manual or an eight-speed automatic plus front-wheel-drive as standard.

All other trims have the eight-speed automatic as the standard gearbox.

More power is available with the higher-performance 2020 Jetta GLI, which produces 228 horsepower and 258 lb.-feet of torque. It comes with either a six-speed manual or a seven-speed dual-clutch automatic. 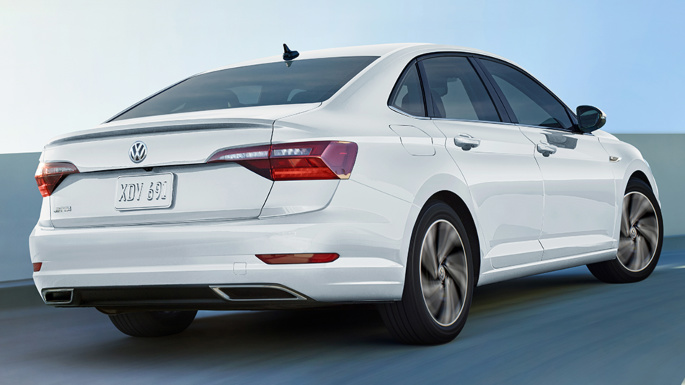 The Volkswagen Jetta is a compact sedan that’s been on sale in the US since 1980 and has always represented upscale European refinement at a more value-oriented price. New car buyers have a lot to choose from in its class; VW has a lot take into consideration to be competitive with this generation.

Jettas have always been regarded as the sedan version of VW’s Golf, sharing the same engines, suspension, wheels and promising more room in the backseat. However, the Jetta has also always been the less-engaging, mild-mannered, and comfier version of this shared platform.

The 2020 version of the Jetta was redesigned last year. While the previous generation suffered somewhat due to VW’s cost-cutting, the new generation has regained a little more of that European refinement at a value-oriented price. It also has many technology features to keep it relevant, as well as a worthy opponent to rival compact cars, such as the Honda Civic, Mazda3, Hyundai Elantra, Kia Forte, and Toyota Corolla.

The 6-speed manual transmission is considered the base option on the base S trim, while an 8-speed automatic is the standard transmission on the higher trims: SE, R-Line, SEL, and SEL Premium 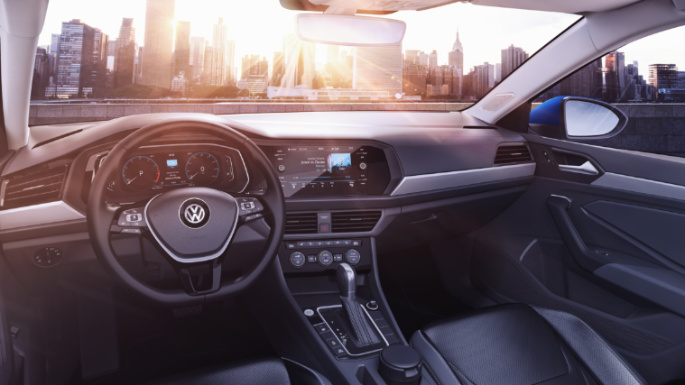 Among the IIHS’ findings, it earned a “Good” rating in most categories, a “Moderate” rating for its headlights, and “Superior” in Front Crash Prevention. The Jetta rolls off the production line with front driver and passenger airbags, front side airbags, and front and rear head airbags.

Several forms of driver-assistance technology are available on every model, though only the R-Line and SEL Premium have adaptive cruise control and lane-keeping assist. Some of the available safety features include forward-collision warning, automatic emergency braking, blind-spot monitoring, and rear cross-traffic alert. Automatic high-beam headlights are also available. 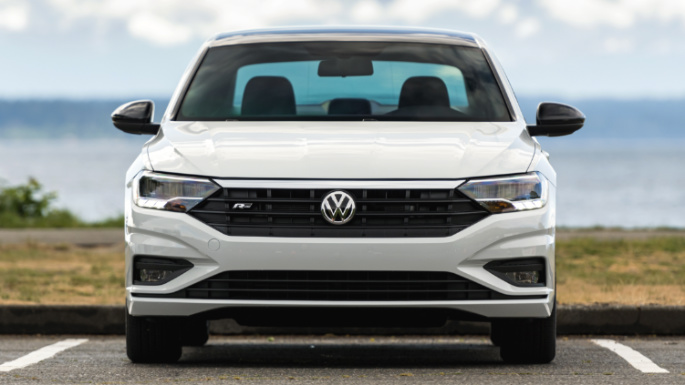 The Jetta is generally a good value due to its low cost of entry, though higher trims are lacking compared to the competition by Toyota, Mazda, and Honda.

The Honda Civic is more powerful and has better driver-aid technology, the Mazda3 has substantially better interior quality and amenities, and while the Toyota Corolla’s base price is a tad higher, it offers better fuel economy and better standard safety features. Though, many reviewers agree that the Jetta is the best-looking of the bunch.

Driver aid and convenience tech are the Jetta’s strong suit and enhance its ability as a solid everyday commuter and family car. 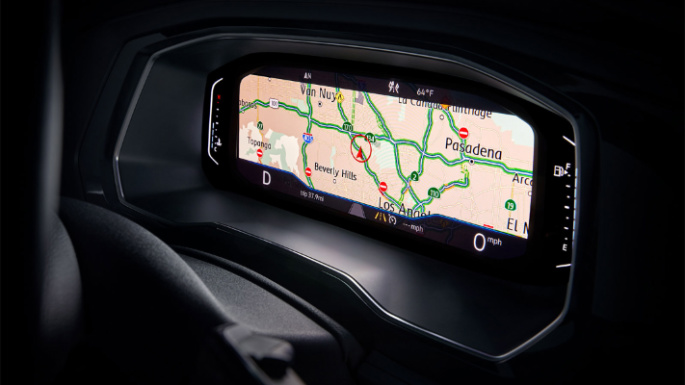 In addition to its modest driver-aid tech features, the 2020 Jetta does well against the competition in terms of tech, with impressive standard features that help it hold onto that refined-European-quality-at-a-value-price status.

Its infotainment system is well-equipped across all trims. S, SE, and R-Line trims come with a 6.5-inch touchscreen in the center console. The SEL and SEL Premium trims receive a larger 8.0-inch unit, which features built-in navigation as a nice added bonus. Android Auto and Apple CarPlay are standard across all trims.

The touchscreens are responsive and easy to use. In addition to traditional, physical volume and tuning knobs, gesture controls for pinch-to-zoom and swiping are standard. Also, every Jetta trim comes equipped with a mobile hotspot, though this requires a subscription-based data plan. Wireless mobile phone charging is only standard on the SEL and SEL Premium trims.

The S, SE, and R-Line trims come standard with a four-speaker stereo system, and the SEL and SEL Premium get a bumpin’ eight-speaker, 400-watt stereo by Beats Audio. 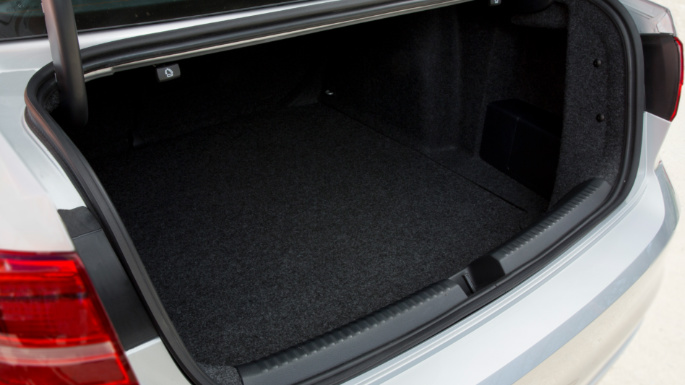 Cargo space has always been the Volkswagen Jetta’s forte for its size, and the 2020 model is no exception. This year’s Jetta has a 14.1-cubic-foot trunk, which is expandable thanks to the standard 60/40 split-folding rear seat.

Passenger space in the 2020 Jetta is roomy, more so than the competition: 41.1 inches of legroom up front and 37.4 inches for backseat passengers, which rivals some modern SUVs.

The 2020 Jetta has a sophisticated design in addition to its ample, generous passenger space. Regardless of trim, every interior caters to the driver and has good forward and outward visibility, making for a safe driving experience.

Multi-level heated seats are an available option on every trim above the S, which should be an appealing choice for colder climates. Not only that, but The SE and R-Line models have an available Cold Weather package that includes a heated steering wheel, heated rear seats, heated washer nozzles, heated windshield wipers, and remote start.

Customizable ambient interior lighting and ventilated front seats are optional on the SEL, and SEL Premium trims, which adds to the Jetta being a pleasant place to be during long commutes. Reviewers found that the Jetta held more carry-on bags than it’s chassis mate five-door Golf hatchback.

The sedan held seven bags in its trunk, compared with the five that fit behind the Golf’s rear seat. The Jetta also held an additional three large bags with the 60/40 split-folding rear seats folded down. Plus, the Jetta possesses clever interior storage, such as various useful door pockets, a deep center-console bin below the armrest, and a large glove box. 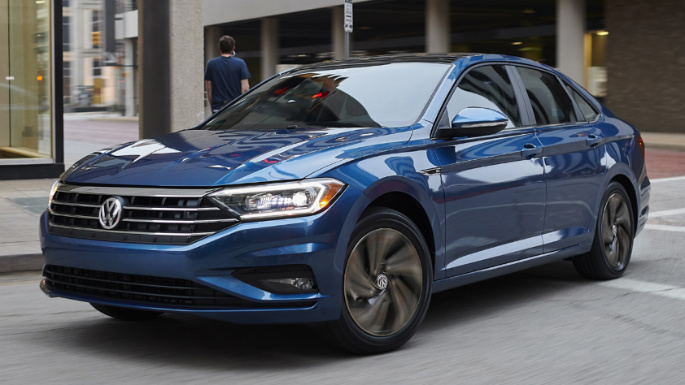 The 2020 Jetta has a clean, elegant design that improves its appeal as a refined European sedan, compared to more rounded styling such as that of the Honda Civic and Toyota Corolla. Reviewers commented that the headlights gave it more of an upscale look thanks to its slim LED accent, a trickle-down design feature from higher-end VWs and Audis. These matched up well with its more chiseled looks and aesthetically-pleasing, clean lines.

VW’s current design language transfers over nicely on the 2020 Jetta, with a bold, pronounced front grille that complements its LED headlights well. 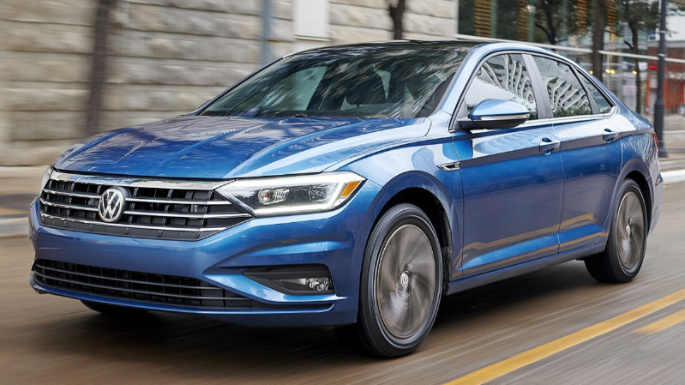 After all, this little 1.4-turbo might have great MPGs, but this comes as a trade-off with acceleration and a fun-to-drive powerband.

When equipped with the eight-speed auto, the 2020 Jetta reaches 60 MPH from a standstill in 7.6 seconds, which is slightly quicker than competing base trims by other manufacturers, such as the Toyota Corolla and Hyundai Elantra, but not as quick at the Honda Civic 1.5-liter turbo four-cylinder, despite its reasonably-light 2959 lb. curb weight.

Reviewers have also reported that the Jetta took longer to come to a stop from highway speeds and exhibited grabbiness in stop-and-go, around-town traffic.

The Jetta’s light steering is good for everyday driving, though it lacks feel and precision, which reviewers find to be traits of the Honda Civic and Mazda3.

The ride quality is good for freeway cruising, as well as city commute driving as it does great over uneven and bumpy pavement.

Unfortunately, it doesn’t quite have the sportiness found in previous generations, notably the 4th and 5th generations of the early 2000s. Generally, the Golf is the sportier, more fun-to-drive of the two platform-mates in this generation, which makes sense due to its shorter wheelbase and slightly-lower curb weight. 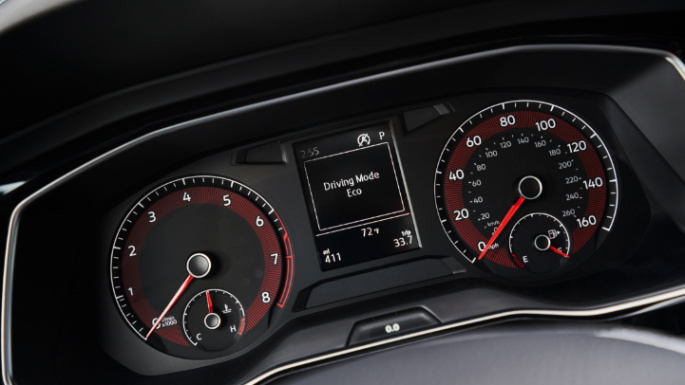 The Jetta’s fuel economy is another strength. The 1.4-liter turbo four-cylinder is rated at 30 MPG city and 40 MPG highway, making this one of the most economical, four-door sedans in its class.

Some reviewers have noted that in real-world testing, being conservative with the right foot led to as much as 48 MPG highway with a 6-speed-manual-equipped model, which gives this sedan diesel-rivaling fuel economy in a conventional gasoline engine.

No hybrid model is available, though, with 30 MPG possible in city driving, such an option might not be necessary. Owners of 2020 owners have reported that they’re quite happy with Jetta’s excellent fuel economy. 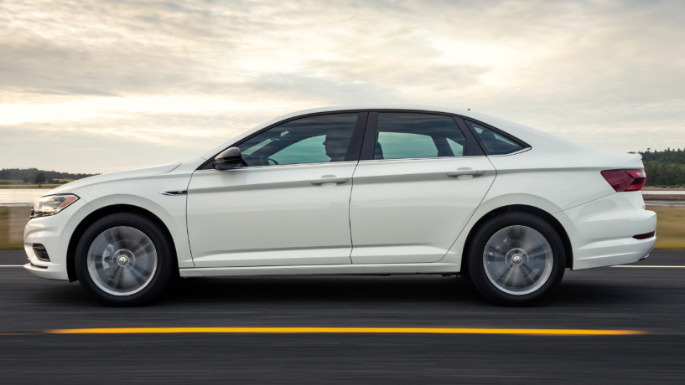 On the bottom rung is the S trim, which starts with an MSRP of $19,815. For that, you get 16-inch alloy wheels, LED headlights, a 6.5-inch touchscreen, Apple CarPlay, and Android Auto, and two USB-C ports. The base transmission is a six-speed manual, with an eight-speed automatic as an option. The Driver’s Assistance Package is optional for the S, which includes heated mirrors, forward collision warning, blind-spot monitoring, and rear cross-traffic alert.

Moving up to the next level is the SE, which starts at $23,565. At this dollar amount, consumers get everything that’s standard on the S, plus a panoramic sunroof, keyless entry and ignition, heated front seats, dual-zone climate control, faux-leather upholstery, and the Driver’s Assistance Package. Options include the Cold Weather Package, which includes remote start, a heated steering wheel, heated rear seats, and heated windshield wipers and washer nozzles.

Up next is the R-Line, which reviewers found to be the best value. This starts at $23,615, includes all of the lower standard equipment, but adds a sporty-looking rear bumper, gloss-black exterior accents, 17-inch wheels, and an electronic differential lock for more spirited acceleration. The Cold Weather Package detailed above is an option.

Above the R-Line is the SEL, which has a base price of $26,415, and includes VW’s Digital Cockpit digital instrument panel, a mobile phone charging pad, an 8-inch touchscreen, the nine-speaker BeatsAudio sound system, adaptive cruise control, lane-keep assist, and the cold weather package.

Finally, the creme de la creme is the SEL Premium trim, which goes for a cool $28,865, and stacks on a level of luxury that gives some compact luxury vehicles a run for their money. This possesses all the plush of the SEL and adds on a power driver’s seat with adjustable lumbar support, sport front seats with ventilation, driver-seat memory settings, leather upholstery, and navigation.

The 2020 Volkswagen Jetta is a solid value for the money. With great standard tech and a comfortable interior, this is sure to be a comfortable daily cruiser that can tick off the miles on the highway, return diesel-like fuel economy, and also relieve a little stress with its excellent tech connectivity. Especially once the S and SE trims are surpassed for the R-Line, which takes advantage of this modern German sedan’s pleasing lines and adds some sporty flavor that gives it even more upscale looks, and a tad more fun behind the wheel.

This Wolfsburg institution is a formidable competitor in the class, though it has a hard time competing against such Japanese competition as found in Honda’s lineup. The 2020 Honda Civic also has a myriad of tech features, great safety ratings, similar fuel economy ratings, better fun-to-drive characteristics, and a little more power. Though, not everyone’s crazy about the Honda Civic’s styling.