The Volkswagen Golf is a compact car available since 1974, although not always called the Golf in the US. While the body style has evolved over the car's seven generations, it has still retained the original offering's classic character.

While the VW Golf has been one of its most popular vehicles worldwide since its introduction and the pride of Wolfsburg, Germany, it has been more of a niche car in the sedan and the SUV-loving US. Still, it has endured with numerous derivatives offered over the years. It's won many awards, including World Car of the Year. And it remains VW's iconic small car, after replacing another small VW — the Beetle. 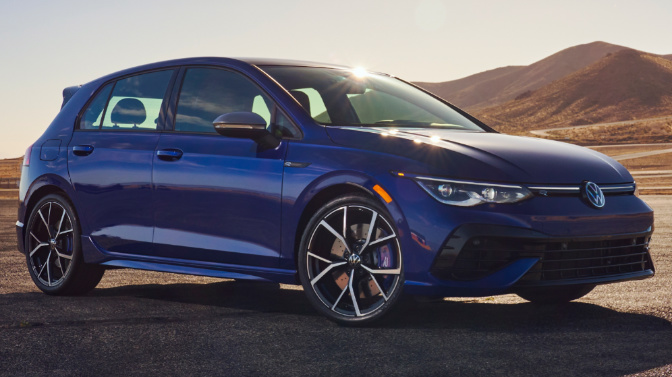 Delayed due to COVID-19 shutdowns and a global microchip shortage, the eighth-generation car arrives at the end of 2021 but without several Golf variants. The standard hatchback and wagon won't be offered in the US for the first time, effectively replaced by the VW Taos small SUV. The Volkswagen Golf GTI and Golf R, however, will return.

While it uses many components from the Mk7, the Mk8 GTI is radically restyled inside and out, with more aggressive styling and more power, with 241 horsepower.

Check out our review and video of the Golf R here and our review of the GTI version here.

In addition, the Golf R gets significantly improved performance specs, such as a new 315-horsepower engine, along with an all-wheel-drive system that incorporates a new differential with torque vectoring for improved handling, along with DCC dynamic damper control.

Inside, the Golf Mk8 relies on a set of touch-sensitive controls and a new infotainment system and voice assistant from the all-electric ID.4. A new advanced driver assistance system will also be offered. 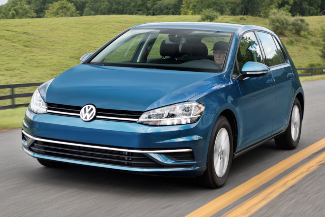 The Golf Mk7 was introduced for 2015 in the US with a significantly expanded lineup and more equipment as it cemented its place in the VW lineup as a premium compact car.

And the Golf R also arrived with a 276-horsepower turbo-four, a new generation of the all-wheel-drive system, and a choice between manual and automated transmissions. New driver assistance features include forward-collision warning, adaptive cruise control, blind-spot monitoring, and lane departure warning.

In 2015, the e-Golf was introduced as the first all-electric VW sold in the US. Sales started in selected markets like California before being expanded to a few more states in 2016. Early models used a 113 horsepower electric motor and 24.2 kWh battery pack, giving an EPA-estimated range of 83 miles.

It was upgraded with a larger battery and a range of 125 miles in 2017. A plug-in hybrid version was never offered in the US.

The TDI was removed from sale after 2015 due to VW's emissions cheating scandal, while the three-door hatchback was also dropped due to overwhelming popularity for the five-door.

But for 2017, the Golf Alltrack was introduced. A raised wagon with standard all-wheel-drive, it offered an alternative to compact SUVs. You can read our review of it here.

There was a minor styling revision for 2018, and the base engine became a less powerful 1.4-liter turbo in 2019. But the Golf SportWagen, Alltrack, and Golf R were dropped after 2019, owing to increased demand for SUVs. 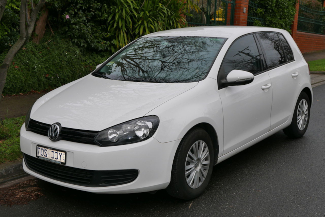 A heavily reworked version of the Mk5 as the Volkswagen Golf Mk6 for 2010. While it featured a new grille design, different wheels, new features, and returned to its old name, the sixth generation carried over several pieces from the Rabbit.

Engines for the base Golf and GTI carried over, while a 140-horsepower, 2.0-liter turbodiesel was added to the lineup on the Golf TDI. Interior refinement was improved, too. The Golf R joined the lineup in 2012, using a 256-horsepower turbo-four in place of the old six-cylinder, and only available with a six-speed manual transmission and lots of standard equipment.

But the Mk6 was effectively a placeholder for a substantially revised Golf Mk7 that would feature an expanded lineup and more features. 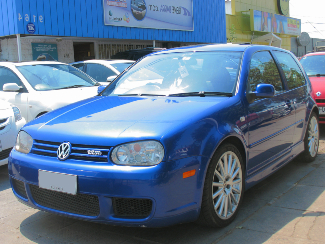 VW delayed the introduction of the fifth-generation Golf in the US until 2006, three years after it was first shown in Europe. With a currency exchange rate problem to solve and the overwhelming popularity of the Jetta here, the Golf lost many of its luxury features. And on top of that, it revived the Rabbit name last seen 20 years earlier.

The standard three and five-door Rabbits used a new 150-horsepower, 2.5-liter five-cylinder engine that was significantly more powerful than the previous base engine, along with a new six-speed automatic transmission option. In addition, the GTI received a new 197-horsepower turbo four with direct injection, which was mated to a six-speed manual or six-speed dual-clutch (DSG) automated gearbox. GTIs were also available as five-door hatchbacks for the first time and featured new plaid upholstery. New features included a navigation system, Xenon headlamps, and Bluetooth phone connectivity, and the rear suspension was upgraded for improved handling.

The R32 returned in 2008, again with the VR6 engine and standard all-wheel-drive, but only available with the dual-clutch transmission. Just 5,000 were imported. 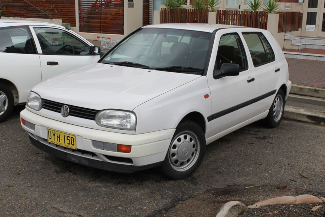 The Golf's fourth generation appeared in the US in 1999, representing a significant upgrade in quality and refinement as VW made its cars more luxurious and expensive and using more pieces from the Audi brand.

Exterior styling was softened, while the interior featured significantly more expensive materials and features such as automatic climate control and electronic stability control. The Cabrio was lightly redesigned but still based on the previous generation and dropped after 2002 to be replaced by the New Beetle Convertible.

The 2.0-liter engine carried over, as did the VR6 with some minor alterations. But a new 150-horsepower, turbocharged four-cylinder was added to both the Golf and GTI models. In addition, a 90-horsepower, 1.9-liter turbodiesel was also introduced.

The lineup culminated in 2004 with the limited production R32, using a 240-horsepower, 3.2-liter VR6, and a Haldex all-wheel-drive system, along with other performance and styling revisions. 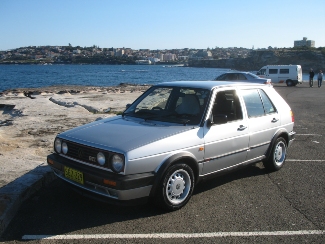 The new Golf (known as the Golf III in the US for some years) arrived on these shores in late 1993 in certain markets and 1994 for the rest of the country. Now built-in VW's Puebla, Mexico factory, the Mk3 was larger in every dimension and also became more aerodynamic.

Standard third-generation Golf three and five-door hatchbacks received a 115-horsepower, 2.0-liter four-cylinder, as did the new four-cylinder GTI. However, the GTI VR6 was introduced later with 172 horsepower from a six-cylinder engine, living up to the sporty badge. A redesigned convertible, called the Cabrio, was also introduced in 1995.

Golfs finally received safety features like dual front airbags and comfort amenities like heated front seats, along with a significant boost in refinement. But to liven things up, various special edition models were offered throughout its life, including the K2 with skis or a snowboard and matching roof rack, and the multicolored Harlequin edition. 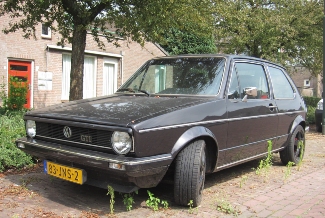 Second-generation Golf was introduced in 1985. Now called Golf worldwide, the car grew significantly in every direction as the small hatchbacks of the '70s started to balloon in size. But that made it more practical, more comfortable, and more powerful.

A 1.8-liter, 85 horsepower four-cylinder was the initial standard engine on the two and four-door Golf models. Diesel was also offered. The Cabriolet continued, still based on the first-generation model, but the pickup was discontinued.

For the first few years of the Mk2, there was no GTI model. Instead, a GT model was added in 1987 using some of the hot hatch's styling cues. But a GTI arrived during the model's life, although it used a far less potent version of the European model's engine and fewer features. Finally, in 1990, a hotter GTI 16V arrived with 134 horsepower and sharper handling. But the Mk2 Golf didn't change much over its life, and sales in the US weren't nearly as strong as in Europe. By the early '90s, a change was more than overdue. 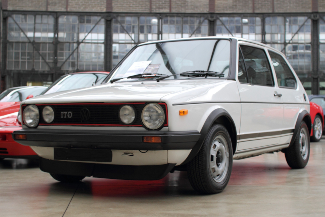 The first Golf was introduced to Europe in 1974 as a radical successor to the Beetle. Rather than being rear-engined and rear-wheel-drive, the new car was a modern front-wheel-drive, front-engined hatchback like the Renault LeCar that was also sold in the US at the time.

The Golf arrived in the US in 1975, except it was mysteriously called the Rabbit instead. But apart from some differences to comply with American tastes and regulations, it was essentially the same car sold worldwide. Available with two or four doors, it was powered by a four-cylinder gasoline engine and, later, a four-cylinder diesel engine with tremendous fuel economy.

Rabbits began to be produced in the US at VW's first plant in the country in 1978 when a two-door pickup version was also introduced. The Cabriolet convertible was added in 1979, and a sedan version, called the Jetta, arrived in 1980.

But the most notable addition late in the Rabbit's life was the GTI in 1983. Based on the model sold in Europe since 1977, the American version used a larger 1.8-liter four-cylinder engine with 90 or 100 horsepower, a modified five-speed manual transmission, and special styling details inside and out. It was a sports car with economy car practicality.

The rest of the Rabbit line went mostly unchanged until it was retired in 1984 with the arrival of the second generation — now called Golf.