The Toyota Sequoia is a full-size SUV first introduced in 2001. It's always been closely related to the Toyota Tundra pickup truck and rivaled the popular Chevrolet Tahoe, GMC Yukon, and Ford Expedition.

But in more than 20 years, there have only been three completely new Sequoias, and that's occasionally put Toyota out of contention with the more often-revised full-size SUVs from General Motors and Ford, not to mention the newer Nissan Armada and the Jeep Wagoneer.

And after discontinuing the Land Cruiser in the US after 2021, the Sequoia is Toyota's only full-size SUV on offer. 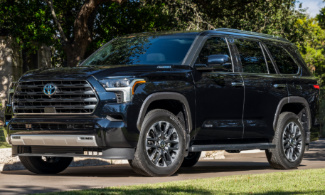 The 2023 Toyota Sequoia was shown in January 2022, ahead of a summer on-sale date. It was again heavily based on the 2022 Tundra that appeared a few months before, but both vehicles used a new global Toyota truck platform first shown with the international Toyota Land Cruiser and 2022 Lexus LX SUVs.

The Sequoia dropped its V8 engine and became available as a gasoline-electric hybrid vehicle for the first time. The only powertrain announced for 2023 was a 3.4-liter twin-turbo V6 gas engine and an electric motor with a total system output of 437 horsepower — 56 more horsepower than the old 5.7-liter V8. A 10-speed automatic transmission is the only choice, with a standard rear-wheel-drive or an optional, part-time four-wheel-drive system. Maximum towing capacity jumped more than 20%, too, to 9,000 pounds.

In addition to a new, stronger structure, the Sequoia received a more sophisticated rear suspension design intended to improve both ride and handling and allow for more interior space. A load-leveling system and adaptive suspension were also options. While the third-row seat didn't fold flat into the floor as on other full-size SUVs, a cargo shelf could be adjusted to simulate a flat cargo area. And the roll-down rear window from the previous two generations was deleted in favor of fixed glass.

Trim levels for 2023 were the base SR5, Limited, Platinum, and TRD Pro, with a new top-level Capstone model rounding out the lineup. Other new features depending on the model were a 14-inch touchscreen infotainment system, 12.3-inch TFT digital instrument panel, over-the-air updates, Apple CarPlay and Android Auto compatibility, and 22-inch wheels. In addition, TRD Pro models came standard with four-wheel-drive, different exterior trim, and off-road suspension and tire upgrades. 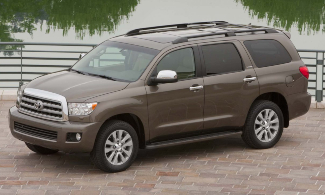 The new generation of Sequoia debuted in 2008, following a redesigned Tundra by one year. Like the truck, the Sequoia grew significantly in size, weighing up to 500 pounds more than the outgoing model. But it also included a more robust, fully boxed frame and a rear independent suspension with coil springs, plus a locking center differential on four-wheel-drive models.

The wheelbase was increased from 118 to 122 inches, and length went from 203 inches to 205.1 inches. These changes put Sequoia firmly on the same footing as other full-size SUVs, as the first generation was slightly smaller than its main rivals.

Seating in this generation was available for seven or eight passengers. The SR5 and Limited could seat eight, while the Platinum could seat seven because of its standard second-row captain's chairs. Maximum towing capacity was 7,400 pounds with the 2WD, 5.7-liter V8, and 7,100 in the 4WD SR5 trim.

But there were few changes to the Sequoia over the years as sales of all large SUVs were severely impacted by high gas prices and a global recession months after its release.

The 2009 model added E85 flex-fuel capability on the 5.7-liter engine, but only in certain states. And the following year, the 4.7-liter base V8 was replaced by a 4.6-liter V8 engine. In 2013, Toyota dropped this smaller V8 engine altogether, and the 5.7-liter V8 became standard on all models.

Other updates included a USB port for iPod and smartphone integration in 2010, the introduction of Toyota's Entune infotainment system for 2012, along with blind-spot monitoring on the Platinum trim, which also gained a standard navigation system. And for 2014, a Blu-Ray rear entertainment system became an option on the Limited and was standard on the Platinum.

The SR5, Limited, and Platinum trims remained in the lineup, but a new TRD Sport trim was added. That model included distinctive exterior trim, a revised suspension, black 20-inch alloy wheels, a digital display screen in the instrument panel, and restyled LED headlights.

But that would be all for changes for the second-generation Sequoia after more than a decade on the market. Rivals had long outpaced it, and a new design was overdue. 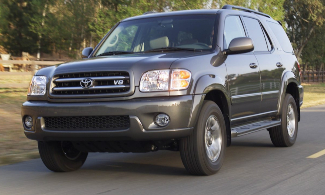 The Toyota Sequoia was released for the 2001 model year, as a larger SUV than the company's popular 4Runner, but less expensive than the Land Cruiser. It shared most of its components with the Tundra, including the engine, dashboard, exterior design, and chassis. However, a new rear suspension was created for the Sequoia, and the vehicle featured three rows of seats for up to eight passengers.

It came in two trim levels: the Sequoia SR5 and Sequoia Limited, and both were available two-wheel drive and four-wheel drive layouts. The only engine available was a 240-horsepower, 4.7-liter V8 shared with the Tundra, along with a four-speed automatic transmission, and standard electronic stability control — an unusual feature at the time.

Proving popular with consumers and coinciding with a boom in SUV sales, Toyota didn't make many changes to the first-generation Sequoia over its life.
A slight refresh was introduced for 2005, which included a modestly redesigned grille and new designs for the lights and wheels. Mechanically, a five-speed automatic replaced the old four-speed transmission, and changes to the engine boosted power to 282 horsepower. And the four-wheel-drive models now included a Torsen center differential that allowed power to be better distributed between the front and rear wheels, depending on road conditions.

While horsepower dipped slightly for 2006 because of new calculations, there would be no other changes to the first Sequoia iteration after a successful six-year run.