The name Prius is derived from Latin, and it means first, original, and superior. Conceived as a car for the 21st century, Prius was introduced in October 1997 as the world's first mass-market hybrid passenger vehicle. The term 'hybrid' comes from the fact that it's powered by a gas engine, electric motor or by a combination of the two. The Prius has been rated as one of the cleanest vehicles available for purchase in the U.S., based on its smog-forming emissions. 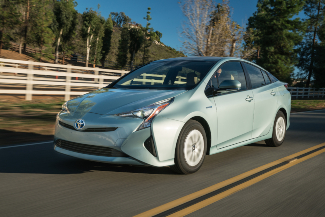 The fourth generation of Prius delivered even better fuel efficiency than all of its predecessors.

The 2018 Prius Eco had a combined city and highway fuel economy of 56 mpg. Because of this, it was ranked as the second most fuel efficient gasoline-powered car without plug-in capability sold in the United States. The technology represents significant improvements in the batteries, electric motors and gasoline engines.

New in this model are standard LED headlamps and a double-wishbone independent suspension in the rear.

This was also the generation where Toyota split the plug-in hybrid version of the Prius into a separate model line called the Prius Prime. It delivered the highest to-date MPG equivalent (MPG-e) while in “all-electric” EV mode. The Prime, which has a four-seat layout (there's no middle seat in the back), can run entirely on electric power for up to 25 miles (its total range is 640 miles). This plug-in hybrid’s overall EPA rating was 54 mpg with a 133 mpg MPG-e rating.

For 2019, Toyota gave the Prius a light facelift that streamlined the headlight and taillight design. The update also added the option of all-wheel-drive for the first time in the Prius' history. 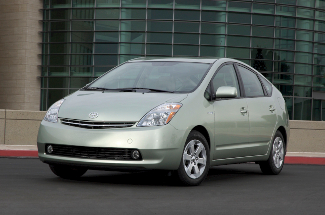 This generation of Prius got a new front-drive Toyota Hybrid Systems (THS) engine that grew in size to 1.8 liters from 1.5 liters. It produced 98 hp but could generate up to 134 hp with the maximum battery power in play. The EPA rated the car at 50 mpg combined.

This was the first generation of Prius to offer an optional plug-in hybrid version; it debuted in 2012 and it offered an 11-mile all-electric range and a total range of 540 miles.

This third-generation Prius had a slightly larger body than its predecessors. Although it kept the wedge-shaped profile from the second-generation Prius, the new model was more aerodynamic, with a special double-wave design to the roof. It also had an updated hood and headlights, with the hood and rear hatch as well as the front axle and brake calipers crafted from aluminum to reduce the vehicle's weight and all four wheels got disc brakes.

This Prius utilized a first-of-its-kind all-electric A/C compressor for cooling. This is the first engine intended for consumer use that needs no accessory belts, due in large part to the use of an electric water pump. Toyota also utilized new plant-derived bioplastics to make this car.

In 2011, Toyota introduced two variants of the Prius body style. The larger Prius V was an extended hatchback (essentially a wagon) with over 50 percent more cargo space than the normal Prius.The smaller Prius C was a subcompact hatchback aimed at more value-oriented buyers.

For the 2012 model year the headlamps and tail lamps were updated, and so were the front fascia and bumper. Inside the cabin, the new model sported a touch-screen AM/FM CD stereo, USB port and auxiliary input jack, as well as Bluetooth capability. There was also an optional rooftop solar panel for providing power to a ventilation fan whenever the car is parked.

In the U.S., Prius trim levels consisted of the Prius Two, Three, Four and Five. The advanced technology offered on the Prius Five included an HDD navigation system and dynamic radar cruise control. Safety features such as the pre-collision system and lane keep assist made their debut. This model also saw the introduction of Toyota's Vehicle Proximity Notification System (VPNS), which made a noise to let pedestrians – especially blind people – know the otherwise silent Prius was there. 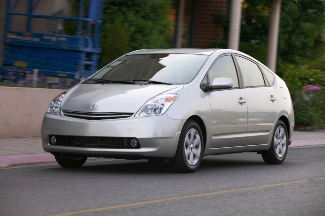 In 2003, the Prius was completely redesigned for the 2004 model year. The new Toyota Hybrid System II replaced the original Toyota Hybrid System, making it a more fuel-efficient car which was more environmentally friendly than before. Though the engine was the same size as the first-gen (a 1.5-liter, four-cylinder unit), it was rated by the EPA at 46 mpg combined.

This was also when the design shifted from a sedan to a five-door liftback, six inches longer than the previous version, which increased luggage space and legroom in the rear seat.

This generation Prius also saw the introduction of what has come to be known as the "triangle silhouette,” so named because the car’s highest point was now directly above the driver's head. From this point, the lines of the vehicle sloped gently downwards in both directions, which improved aerodynamics while becoming part of the signature Prius look. 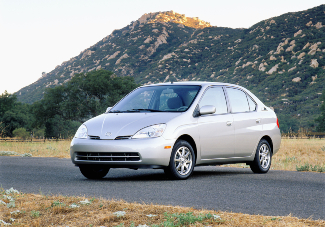 The original Prius had a 1.5-liter, four-cylinder automatic engine and offered Standard, Base and Touring packages. The EPA rated it at 41 mpg combined.

Standard equipment included AC and electric power steering. This first Prius was a sedan – the only time Toyota has offered a sedan model in the Prius line. While it could seat five passengers, cargo space was limited by the car’s battery pack. There are two kinds of battery packs, a High Voltage (HV) battery, aka the "traction" battery, and a 12-volt Low Voltage (LV) battery, which starts the car and provides power to the car's computer.

When the vehicle is turned off, Prius uses a vacuum flask to store hot coolant in for later reuse, thus reducing the car's warm-up time.