A continuously variable automatic transmission is standard, but you can opt for a 6-speed manual transmission

The 2018 Toyota Corolla has excellent safety ratings. The National Highway Traffic Safety Administration (NHTSA) gave the Corolla an overall safety rating of five out of five.

Although the Insurance Institute for Highway Safety (IIHS) hasn't rated the 2018 Corolla yet, it gave the previous model year a 'Good' rating on all crash tests except the headlights test, which received a rating of Acceptable. IIHS also presented the 2017 Corolla a 'Top Safety Pick Plus' award.

The Toyota Corolla iM hatchback model has the Toyota Safety Sense-C suite, which comes with all of Safety Sense-P's features except adaptive cruise control and pedestrian detection.

The 2018 Corolla comes in several trim levels: the base L, the LE, the LE Eco, the SE, the XLE, and the XSE. There is also the Corolla iM, a hatchback model.

Most reviewers agree that the 2018 Toyota Corolla gives you a lot of bang for your buck. Unfortunately, its estimated fuel, maintenance, and insurance costs are $4,480 per year, higher than many other cars in this category.

The 2018 Toyota Corolla has about 13 cubic feet of trunk space, on par with other compact cars. However, when the 60/40 split-folding rear seats are down, the vehicle boasts extra storage space.

The iM hatchback model enjoys a more impressive 20.8 cubic feet of trunk space behind the rear seats. Some rival compacts, such as the Honda Civic, enjoy more cargo space than the Corolla.

Unfortunately, the 2018 Corolla doesn't have many utility-boosting features, such as roof rails or a power liftgate.

Reviewers praise the 2018 Corolla for its elegant exterior styling, especially for the Corolla iM's long roofline and European feel. The Corolla weighs just 2,840 to 2,885 pounds, depending on the trim, and it's 183 inches long and boasts 6.7 inches of ground clearance. Optional exterior touches include daytime running lights and a rear spoiler. The Toyota Corolla iM hatchback gets 17-inch alloy wheels.

Reviewers are more reserved about the Corolla's cabin, which they view as a little bland. On the other hand, the cabin's contrasting stitchwork and blue lighting lend some flair to the interior, and the dashboard is regarded as easy to use.

Cloth seats are standard in the new Corolla, but synthetic leather and premium cloth upholstery are available. In addition, sport seats, heated front seats, and an eight-way power-adjustable driver's seat are optional, as are a sporty instrument cluster and leather-wrapped steering wheel.

All Corollas have front-wheel drive. A continuously variable automatic transmission (CVT) is standard, though a 6-speed manual transmission is available.

Critics aren't bowled over by the Corolla's ride, noting that the engine doesn't have much pep, but they agree that the handling is serviceable. Steering is light, and this new car absorbs bumps well. Unfortunately, acceleration is slow, and the braking isn't as smooth or responsive as it could be. The iM hatchback enjoys an independent rear suspension for a smoother ride.

All in all, the 2018 Toyota Corolla has decent fuel economy. According to the Environmental Protection Agency (EPA), the base model gets 28 mpg on city roads and 36 mpg on highways for a combined 32 mpg. With the manual transmission drivetrain, that same vehicle gets 27 mpg city and 35 mpg highway for a combined 31 mpg. 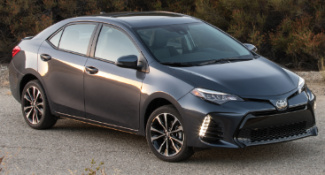 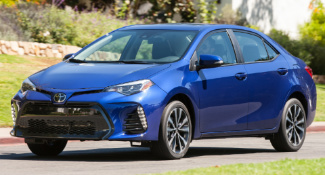