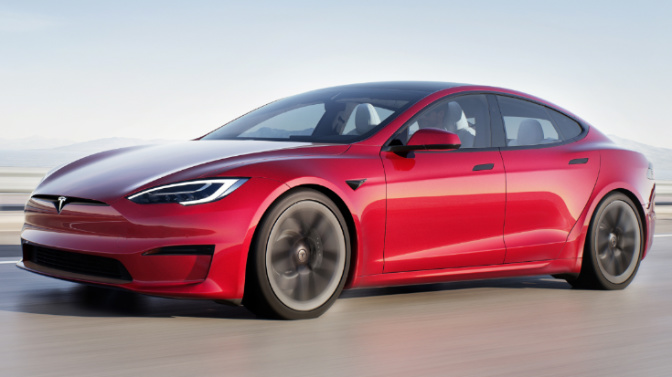 In 2021, the Tesla Model S is the Palladium refresh or Tesla Model S Plaid and basically represents the third generation. The refresh included a new powertrain, suspension, and thermal management, as well as a new interior. Increased performance and larger rear seats, as well as a yoke-type steering wheel, also welcomed 2021.

The refresh originally consisted of the Long Range (LR) model, the Plaid model, and the Plaid+; however, the Plaid+ was quickly discontinued as a production car shortly after its release. The "Plaid" name is applied to the performance model range and is a reference to the only speed faster than "Ludicrous" from the movie "Spaceballs." The Plaid model is one of the quickest electric cars on the market. The Model S Plaid's official top speed is rated at 200 miles per hour; however, that is according to Elon Musk and Tesla Motors. Its top speed, as recorded on camera, is 167.14 mph.

Depending on which trim you choose, the 2021 Tesla S model has the longest range at 412 miles on just one charge, and its impressive acceleration performance rivals some of the world's best supercars. The higher price tag on this newer model does have buyers turning to the Model Y SUV and the Model 3 sedan. The 2021 Tesla S also faces increased pressure from upcoming rivals like the Porsche Taycan and the Audi Rs e-Tron GT.

The Tesla Model S Plaid is the new top-spec model and boasts 1020 horsepower from three onboard electric motors. The Plaid provides up to 390 miles of range. Opt for the Model S Long Range with 412 miles per charge if you want added miles. The Model S Long Range also has the highest MPG electric ratings at 121 city and 112 highway.

The new Model S offers full-time all-wheel drive regardless of the chosen version and an electric motor dedicated to each front and rear axle. A tri-motor combination features in the Tesla S Plaid model, with a third electric motor included in its powertrain offering.

The new Model S cabin comes with a giant infotainment system that is standard across all variants. There is also a secondary display for the gauge cluster and a small touchpad in the rear seat.

The long-awaited full self-driving capability should release in 2021. According to Elon Musk, the full self-driving feature will take autonomous driving to a new level with the latest software included in version 10.

Though Tesla regularly updates the Model S without adhering to model years, Tesla gave the Model S essentially a mid-cycle design refresh for 2016. The most significant update was to the car's exterior styling, particularly the front fascia, which was modified to resemble its SUV companion, the Model X. The other big update around this time period was Autopilot 2 (AP2) that included eight cameras around the vehicle and a more powerful Autopilot computer.

Adaptive LED headlights were also introduced at this time. The interior got a HEPA cabin air filtration system and two ash-wood style options.

Tesla also upgraded the standard charger to 48 amps, allowing faster charging when using a higher amperage outlet. 2016 saw the short-lived return of both the 60 and 60D versions (D is the all-wheel-drive designation). While its battery could deliver 75 kWh, it was software-locked to produce only 60, with the ability to unlock 75 only available as an option. This was also the year "Bioweapon Defense Mode" (an extreme version of a cabin air filter) made its debut. Late 2016 was when the all-glass roof option became available.

A high-performance P100D model boasted an EPA-estimated range of 315 miles, the first electric car to break 300 miles of range. In "ludicrous" mode, this version became the fastest accelerating vehicle currently being produced, going from 0-60 mph in 2.5 seconds.

In 2018 the Model S Linux-based source code was released by Tesla and was maintained on a repository as part of a software licensing process.

In 2019, the Performance and Long Range Pus variants offered the "Raven" powertrain, which included the electric motor from the Tesla Model 3 as the front motor. The Raven powertrain introduced a new adaptive air suspension and was more powerful than its predecessors. 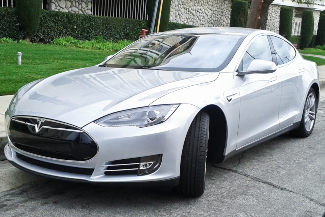 In an early review of the Model S, Consumer Reports shared the following statement: "This car performs better than anything we've ever tested before. Let me repeat that: Not just the best electric car, but the best car. It does just about everything really, really well."

The Model S launched in 2012 in three different variants: 60, 60D, and P85. Each had better range and horsepower than the last. Tesla first utilized over-the-air software capabilities in 2012 when they launched their Model S sedan. The over-the-air updates add new features and functionality to all Tesla variants.

The P85 model was the Performance variant. That is what the "P" stands for; "Performance." It provided a three-phase or tri-motor variant, four pole AC induction with 416 horsepower. The engine was a rear-mounted electric motor with a copper rotor.

A 17-inch touchscreen mounted in the dashboard was revolutionary for its time and managed everything from general vehicle information and stats to navigation, phone, and climate control.

In 2014 Tesla introduced the AWD versions of the 60, 80, and P85 Model S, and the letter D (for dual) after the model number differentiated these versions.

2014 was also when Tesla altered the automatic height adjustment feature in the suspension to remember locations such as potholes or steep driveways that need higher clearance. This was to protect the batteries from coming into contact with road debris and getting damaged. 2014 also saw the introduction of the Tesla Autopilot. Teslas came with a camera, radar, and sensors that together enable the car's Autopilot feature, in addition to providing lane centering and adaptive cruise control during normal driving. The autopilot feature enabled semi-autonomous driving and parking capabilities.

In 2015 the 70D was introduced, replacing the 60 and 60D. The P85 was also discontinued at this time. The 85D saw its rear-drive unit exchanged for a smaller one, with a second equivalent motor added in the front. This version also delivered a slight increase in range and speed.

The P85D had a new front-drive motor which improved the overall power significantly. P85D variants also had an "Insane Mode," which has now been advanced to "Ludicrous Mode," allowing drivers to maximize the car's full acceleration potential. Unfortunately, it also puts intense strain on the batteries, which could cause them to overheat and even damage the car, so it is deliberately limited (by Tesla) to being used in short spurts with about ten minutes of cool-down time in between.

2015 also brought an upgraded 70 kWh battery to replace the 60s. 70 kWh models were available with either rear-wheel-drive or AWD. In addition, 2015 was the year that saw the introduction of the 70, 90, and 90D as well as the P90D with Ludicrous mode. The front axle on the P90D delivers 259 horsepower, while the rear axle offers 503 horsepower. This model can accelerate at 1.1g.

Evolution of the Tesla Model S

Tesla, Inc. is an American electric vehicle and clean energy company. They are based in Palo Alto, California, and operate under the renowned CEO, Elon Musk. Tesla is an automaker commonly lauded for its environmentally-friendly credentials and technology. Still, the full fleet, including the Tesla Model S, Tesla Model X, and Tesla Model 3, each offers a unique performance personality.

After the successful production of the Roadster, Elon Musk recognized the need for a four-door electric vehicle. The electric car revolution first started when a sports car with an internal combustion engine lost a drag race to an anonymous automaker with a motor powered by just a set of batteries. The introduction of the Tesla Model S put a damper on sports car fans after the plastic-looking, silent electric vehicle challenged more supercars with victory. The groundbreaking hatchback sedan quickly accelerated past mainstream manufacturers like BMW and Chevrolet.

Tesla's Model S is an all-electric, full-sized, five-door liftback luxury sedan that has been built since 2012. Tesla - unlike most automakers - doesn't issue specific model years or generations, although Tesla did give the car a visual update in 2016, while the 2021 model year added more performance and horsepower and a newly styled interior with added rear-seat room.

All versions of the Model S seat five passengers, but an optional folding third-row child's seat brings that number up to seven. With this option, the car comes with a more heavily reinforced rear bumper. The following four trims are available: base model, Performance model, Signature model, and Signature Performance model.

The Model S was designed around the fact that it has an electric powertrain and batteries mounted between the two axles for optimal weight distribution. The Model S has two trunks, one in the rear and one in the front that Tesla has dubbed the "frunk."

The Model S is rear-wheel- or all-wheel-drive, depending on the model, and it has been offered with a variety of power outputs and battery pack sizes.