Still in its first generation, the Macan S receives its second significant refresh for the 2022 model year. The German automaker updated the front and rear bumpers, added a new wheel design to the order form, and reworked the center console, shift lever, and steering wheel. This 2022 model year also inherits the 375-horsepower twin-turbo 2.9-liter V6 engine from the previous year's GTS model.

Would we buy one? Maybe. 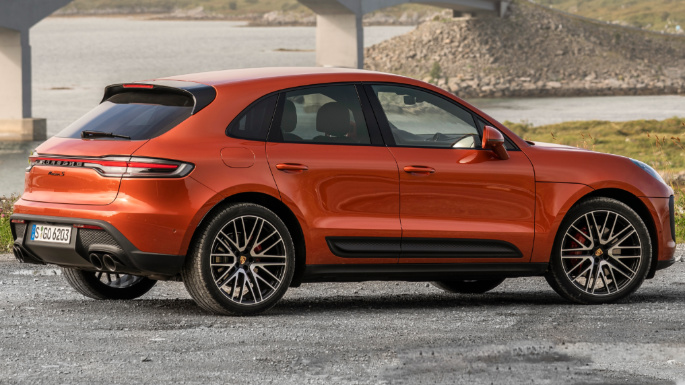 The Porsche Macan S is a compact luxury SUV that has received a second significant refresh for the 2022 model year while remaining in its first generation since 2015. It is one of the most athletic luxury crossovers in its class. It competes against rivals like the BMW X3 M, Audi Q5, Audi SQ5, sibling Porsche Cayenne, Mercedes-Benz GLC Coupe, Alfa Romeo Stelvio, and Jaguar F-Pace S.

The Macan S is the sweet spot of the Macan range if you want one as a family hauler. The Porsche Cayenne is excellent as a family car, but its larger size comes with a heftier sticker price. The Macan represents a unique balance between being a sports car and an everyday comfort SUV that is slightly more affordable than its bigger sibling. Better still, the upgraded engine welcomes a boost in performance compared to the base model within the same Macan model lineup.

Interestingly, according to Kelley Blue Books, 60% of Macan buyers are new to the Porsche brand. The two main reasons they buy a new Macan are its exterior styling cues and impressive performance.

The 2022 model year welcomes an engine upgrade and some other welcome changes for the Macan S. The new Macan inherits the 375-horsepower 2.9-liter twin-turbo V6 engine from the previous year's Porsche Macan GTS model, which makes it significantly faster than the previous model years. The Macan S has an output of 383 lb-ft of torque and comes with Porsche Active Stability Management. All-wheel-drive remains the standard drivetrain together with a seven-speed dual-clutch gearbox PDK transmission.

The exterior welcomes changes to the front and rear bumpers as well as new wheel designs. The interior welcomes a reworked center console, shift lever, and steering wheel. Newly standard in the tech lineup is heated front seats and wireless Apple CarPlay. Previously, Apple CarPlay wasn't wireless, and you needed a USB to connect to the Macan's infotainment system. 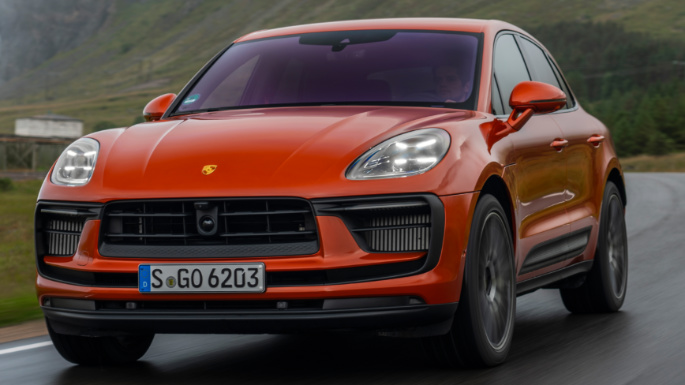 The Macan S may offer less utility than some rivals, but it's definitely the most fun to drive in its class of luxury compact crossovers. The entry-level Macan features a 241-horsepower turbo four-cylinder engine that is quick around town. But, if performance is what you want, then the Macan S won't disappoint. It is a lot faster than most SUVs in its class (including the Mercedes-AMG), and this is the turning point where sports car enthusiasts get real value for money. If you want to go any faster, then the Macan GTS model takes speed and acceleration one notch further.

The Macan S comes standard with the Porsche Active Suspension Management (PASM) system. It is an electronically adjustable air suspension system. It allows you to toggle through different suspension modes to enhance your diving experience, including Sport and Sport+ drive modes.

Some reviews describe the Macan S as feeling like a sports sedan and genuinely love it at first drive. The ride is incredibly smooth and carefully controlled. The steering may feel a little lighter than what you may expect from Porsche's sports car lineup, but nevertheless, it is tactile and handles accurately. The Macan's ride and handling are a step above most competitors in its class.

The only gearbox available is a 7-speed dual-clutch automatic, and it is undoubtedly superb. The shift logic and speed with which it changes gear are highly responsive, although it can jerk a little in the city if you leave the Macan in its Sport drive mode. 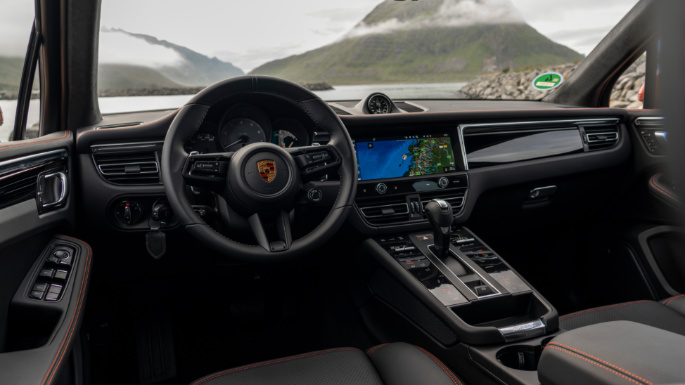 Neither the National Highway Traffic Safety Administration (NHTSA) nor the Insurance Institute for Highway Safety (IIHS) has crash-tested the 2022 Porsche Macan. This isn't uncommon for high-end luxury vehicles.

The Macan can be had with a wide array of driver-assistance technology when it comes to safety. Unfortunately, almost none of it comes standard. The only standard safety features are a rearview camera, front and rear parking sensors, and lane departure warning. Notably absent in comparison to its rivals are standard automatic emergency braking and blind-spot monitors. 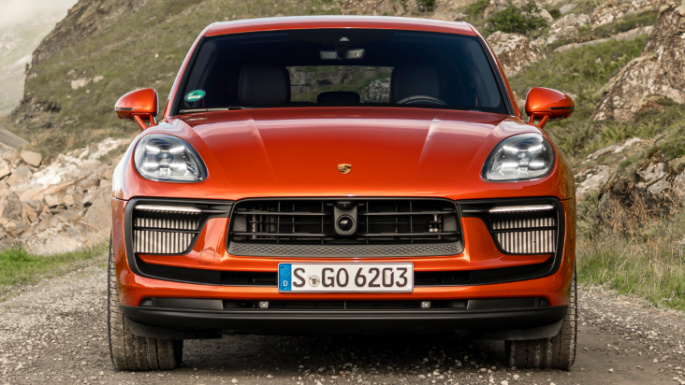 Porsche is well-known for its expensive options, so the Macan S can easily pass the $100,000 price range when loading it with add-ons. This means the Macan quickly becomes one of the most expensive options in the compact luxury SUV class, even just as a standard offering. The BMW X3 M and Audi SQ5 are both cheaper than the Macan S.

Some Porsche Macan reviews note that its minimal list of standard safety features is disappointing compared to rivals with a longer list and yet lower price tag. However, the Macan S does supersede rivals with its performance.

The automaker offers good warranty coverage; however, some rivals like the Jaguar F-Pace and Cadillac XT5 provide better coverage in most areas. There is complimentary maintenance for one year or 100,000 miles. Suppose you would like to become more familiar with the impressive performance of the Macan. In that case, you can opt for the Porsche Experience Center for $395 (plus a $50 damage waiver fee), and you will receive both coaching and track time in your new Porsche at either the Atlanta or Los Angeles location. 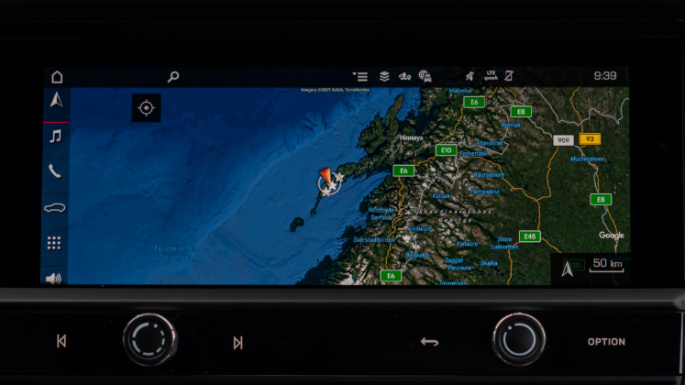 A large standout point is the fact that the Macan S doesn't feature Android Auto at all, not even as a standard wired connection. Most, if not all, rivals offer Android Auto. It is somewhat surprising for a vehicle of this high caliber and sticker price not to incorporate a tech feature so high in demand by drivers.

Regardless of the Android Auto "sore point," the infotainment system offers an intuitive interface and a user-friendly touch screen with quick responses and crystal-clear graphics. There are many dashboard buttons that take some time to get used to, but the layout still makes sense. 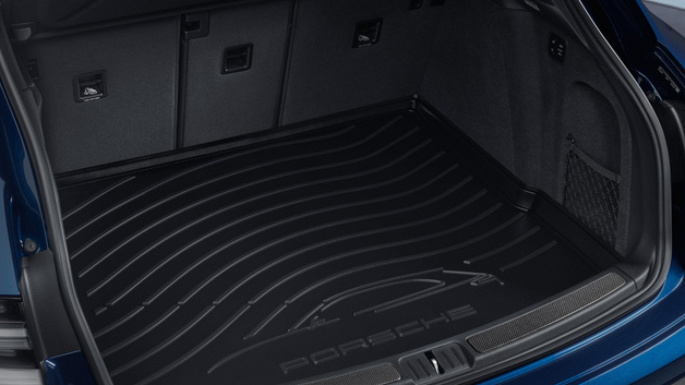 The front seats of the Macan S are spacious and comfortable, with the interior comforts centered around the driver. Unfortunately, the rear seats are very tight, especially considering the fact it is a two-row SUV. The headroom and legroom are so small that the Macan offers significantly less space than most competitors.

The Macan is unquestionably more practical than any 2-door Porsche in the automaker's lineup; however, it doesn't offer the room or utility you would expect from an SUV. According to the Porsche Macan review by Car and Driver, "a puny cargo hold and small interior cubbies make the Macan one of the least practical vehicles in this segment." There is only 17.2 cubic feet of cargo space behind its rear seats. Fortunately, the rear seats fold down to extend the area to 52.9 cubic feet.

The Porsche Cayenne can out-tow its smaller Macan sibling, providing more cargo and rear-seat space. Even though the Macan's cargo space is similar to the Audi Q5, it still has one of the smallest cargo holds in its luxury crossover segment and for the compact SUV class in general 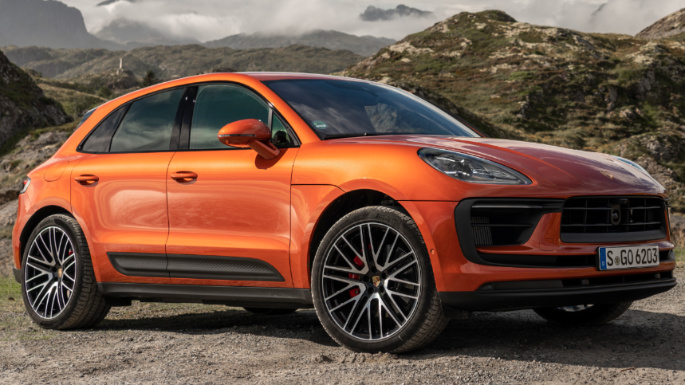 The Porsche Macan S incorporates plenty of top-notch materials throughout the cabin, giving it an appropriate look and feel for a luxury SUV. Unlike the base Macan, the Macan S has full leather upholstery. While the interior may be considered stylish, it still doesn't feel quite as modern and luxurious as some rivals' interiors. Some piano black plastic can be found inside the cabin and around the center console; however, it is notoriously difficult to keep this material clean.

The 2021 Macan was the last vehicle in the automaker's lineup to feature the cluster of hard buttons making up the center console's design. For 2022, the Macan adopts Porsche's latest design philosophy for its new cars, which might be described as a "waterfall of haptic buttons." Some don't prefer the haptic touch panel to the actual buttons, but Porsche does at least group the controls into logical clusters.

The center console features a wide array of new haptic touch controls instead of being overwhelmed by buttons. While this makes the panel look more cohesive, the controls are a little harder to use. On a positive note, the 10.9-inch infotainment system is ergonomically designed and user-friendly.

External styling includes the new addition of some 3D texturing to the side blades of the vehicle, which helps them stand out. The rear diffuser has also crept up the back bumper making it more prominent. 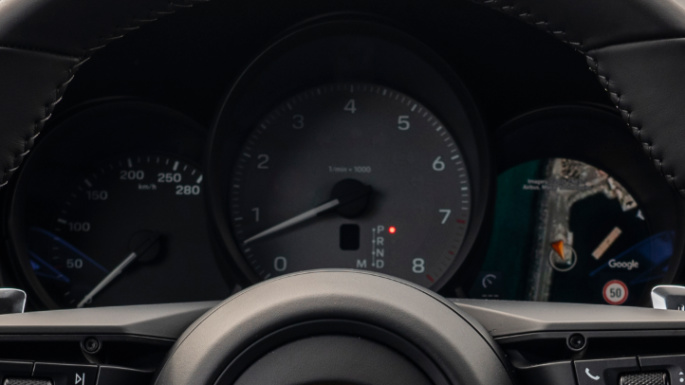 Unfortunately, the Porsche Macan is extremely thirsty for fuel. Even the base turbocharged four-cylinder engine is a guzzler. All Macan models require premium fuel to add to the already heavy fuel bill. Its poor fuel economy sets it back behind its classmates who typically have better fuel economies, like the BMW X3 and Alfa Romeo Stelvio.

There is no electric version of the Macan for the 2022 model year; however, a fully electric Porsche Macan will arrive in 2023 with a better EPA rating, alongside the long-awaited Porsche Macan T (Touring) model. 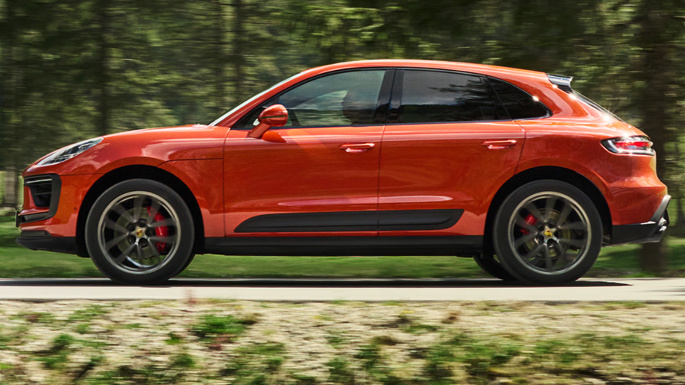 The 2022 Porsche Macan S lies in the middle of the lineup of Macan models, between the entry-level and GTS models. It has a starting MSRP of $65,400, excluding the $1,350 destination fee. The Macan S features a 375-horsepower, twin-turbo 2.9-liter V6 engine paired with all-wheel-drive and a seven-speed dual-clutch PDK transmission.

Below are the optional packages on the Macan S:

The Premium Package costs $2,240 and includes the following add ons:

The Premium Plus Package costs $4,640 and includes the following add ons:

You can also add Porsche Torque Vectoring Plus (PTV+) for $1,500 and a sport exhaust system with silver or black tailpipes for $2,930 to further enhance your Macan.

We would keep our 2022 Porsche Macan S as standard as possible to keep the already high starting price as low as we can.