The 2020 Nissan Versa is a subcompact sedan that has long been the brand's entry-level vehicle and aimed at first-time car buyers. For 2020, Nissan redesigned the Versa; it now rides on a more modern platform and features more technology that will appeal to younger people as well as those concerned with safety.

Rivals include subcompact cars such as the Chevrolet Spark, Honda Fit, Hyundai Accent, Kia Rio, Mitsubishi Mirage, and Toyota Yaris. For 2020, Nissan decided not to continue with the Versa's hatchback counterpart, pointing those buyers to the Nissan Kicks small SUV.

The outgoing Versa earned notoriety as one of the least expensive new cars on the market, but the new one received a substantial jump in price. To counter that, Nissan has equipped it with more standard features and a stronger engine to make it feel like a more refined vehicle.

TL;DR: Some modern Nissan styling touches make it look less frumpy, but it's unlikely to excite.

The Versa was last redesigned for 2012, so its exterior appearance grew dated despite some updates here and there. 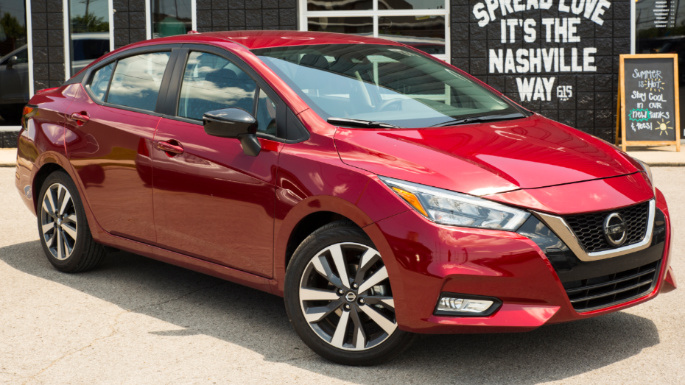 The 2020 model benefits from other well-received Nissan designs recently, such as the Altima sedan.

Cues from that midsize sedan are evident on the 2020 Versa, such as in the grille and lights and blacked-out trim. 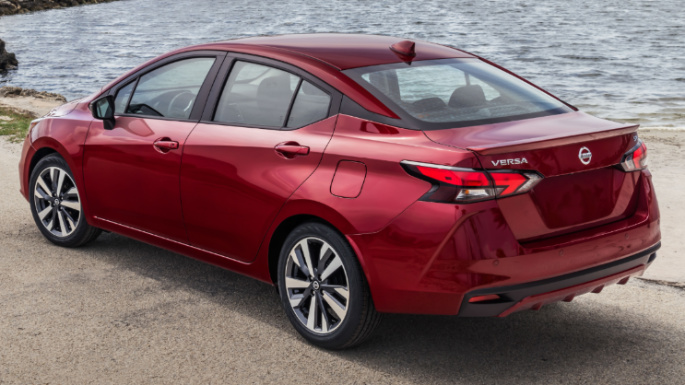 The car is also wider by nearly two inches, which makes it look more prominent from the front. Lower and longer proportions at the side also make the new Versa appear like a more grown-up vehicle than the old model.

Perhaps the most significant visual change for the Versa is how much more contemporary the interior looks. 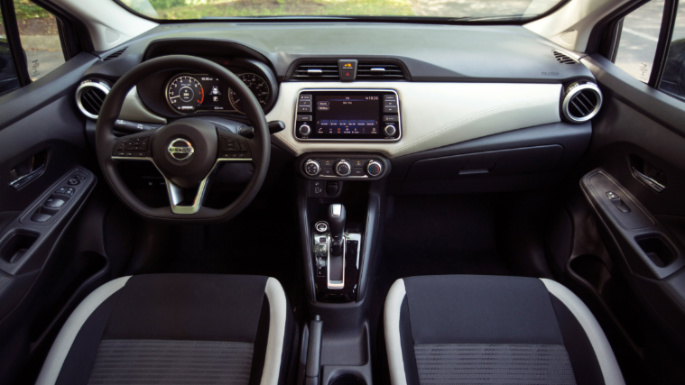 No longer a large piece of molded gray plastic, there are now sweeps and bright digital displays that look integrated into the car. Most models even feature simulated leather on the dashboard, mimicking a stitched dashboard from higher-end vehicles, and offers heated front seats.

Yet there are still quirks. There's an armrest that's not available on the base model and only has space for the driver's arm, but at least a height-adjustable driver's seat is standard across the line.

While not a premium car, reviewers pretty much unanimously agree the interior is a vast improvement over the outgoing car's. 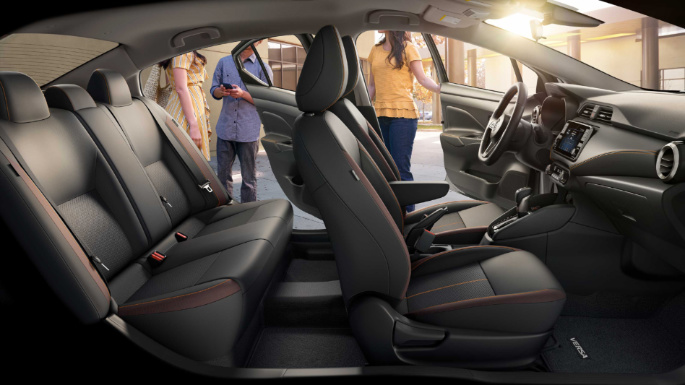 A new instrument panel -- with an analog gauge for the speedometer and a configurable digital display for other functions such as the tachometer and trip computer -- comes on all trims but the base car. It's a display similar to other Nissan products such as the Kicks and the Leaf, and technology that's unusual for a subcompact car.

Despite this added technology, the controls are considered easy to use and not overwhelming, which is common in this segment. Infotainment and ventilation controls are relatively simple and similar to those found on other Nissan sedans. 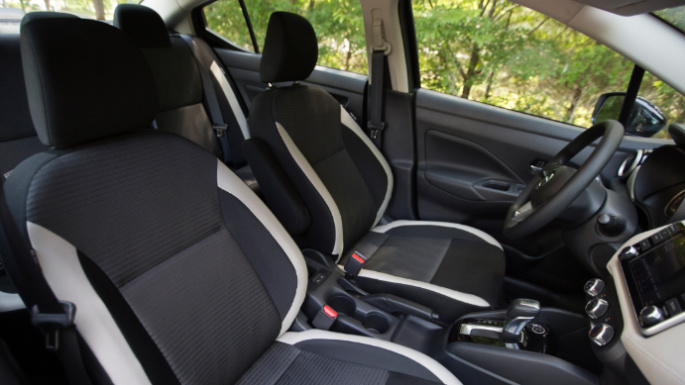 Nissan may have made the Versa longer and wider, but that hasn't made it a more spacious car inside. While front headroom is considered suitable for the class, it's still a narrow vehicle, and five people will struggle to fit in – four is considered the better maximum capacity for all passengers to be comfortable.

In fact, some reviewers found the seats themselves to be uncomfortable as the cushions that gave way too soon on long trips. Others thought they shared the good qualities with the seats found in other Nissan sedans like the Altima and Maxima. Either way, pretty much everyone agreed the fabrics used were a massive improvement over the previous Versa.

TL;DR: New styling impedes on practicality somewhat, but the Versa is still a lot of space for the money.

One of the few positive attributes of the 2019 Versa sedan was the vast interior space and trunk room offered compared to other subcompact sedans like the Mitsubishi Mirage G4 and Toyota Yaris. 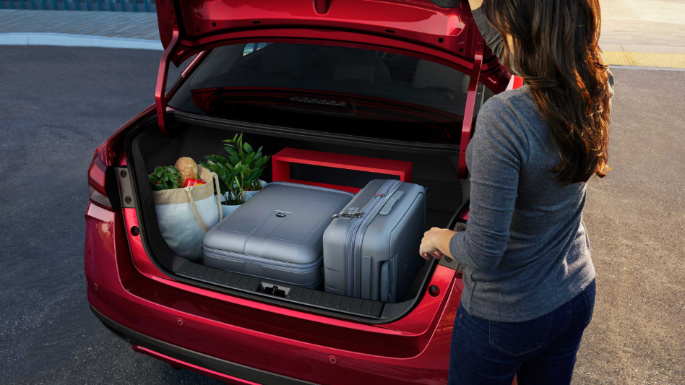 Most of that carries to the 2020 model, but some concessions have been made for the sake of style. The lower roofline impedes on headroom for taller rear passengers, while legroom is cut by nearly six inches from the previous car.

Front-seat space was noted as relatively generous by reviewers, but the Versa is no longer the runaway roomiest car in the class. Some may consider the Honda Fit, with its upright styling and large windows, to now offer the airiest cabin in the subcompact segment. 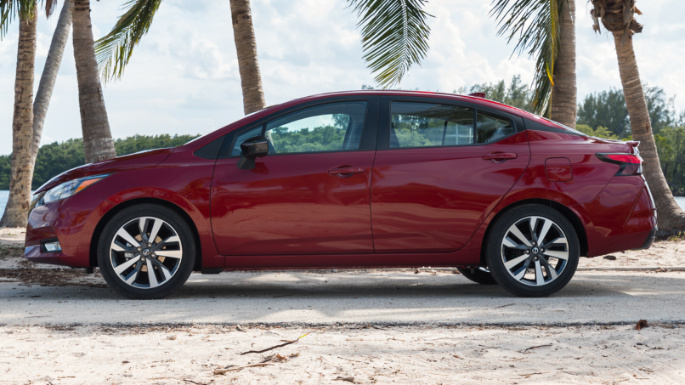 Still, cargo space remains a plus, with up to 15 cubic feet. That's more than some cars in the compact and midsize classes, making the Versa useful for fitting luggage for four. It also takes some of the sting out of losing the hatchback variant, although the Honda Fit still has the edge with the seats up.

And folding rear seats are not available on the Versa S with the manual transmission, an odd omission.

TL;DR: Technology becomes the Versa's trump card, with features unexpected for the class.

Where it was once clearly a laggard in the class, the 2020 Versa adds numerous standard and optional tech features that put it among the best cars, especially for its sub-$20,000 starting price. 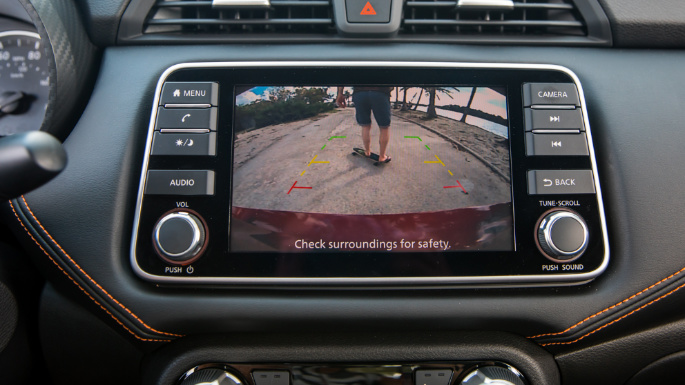 A seven-inch touchscreen infotainment system is standard on all but the base S model. While Apple CarPlay and Android Auto compatibility come with it, built-in navigation isn't available at all. That may not be such a bad thing, especially for younger drivers used to using smartphone map apps.

The screen itself -- also lifted from the Nissan Kicks -- is easy to use with a bright display and relatively simple controls, although it's not particularly elaborate. Still, it's among the most advanced in the subcompact car class.

The Versa also comes standard with three USB ports, Bluetooth with streaming audio, steering wheel-mounted audio controls, Google Assistant voice control, and push-button ignition. In addition to the digital driver's display for the instrument panel, the Versa can also be had with automatic climate control and keyless entry.

All of this may not sound groundbreaking when looking at the technologies introduced in mainstream cars in recent years. But it's significant that many are standard on all Versa models. Those who prioritize technology and are looking at an inexpensive new car may find this clinches the deal.

TL;DR: Driver assistance technology is another Versa strong suit among its peers.

Standard safety technology is another place where the 2020 Versa shines, thanks to equipment that's rarely standard on vehicles in this class plus some new technology to this sector.

All models get automatic emergency braking with pedestrian detection, rear automatic braking, lane departure warning, and high-beam assist. SV and SR models get rear cross-traffic alert and blind-spot monitoring, and the SR can be equipped with adaptive cruise control.

A new feature for the SV and SR is a rear door alert, which reminds drivers exiting the vehicle to check for anything – or anyone – left in the rear seat. Nissan has stated it wants the technology on all of its four-door vehicles by 2022.

Nissan's efforts to make the Versa look more mature inside and out have apparently paid dividends to the way it drives. But a little more power from the engine may have been welcome.

Coming from the old model, the 2020 Versa is regarded as immeasurably more composed on the road. The flightiness and instability of the previous iteration has been extinguished, with reviewers commenting on the solidity of the brake pedal feel and weight of the steering.

The suspension also soaks up bumps and road imperfections with fewer jolts than before, almost reaching levels of larger cars. Nissan may also have been gunning for a more refined consumer here, too, as comments surrounded how noise and vibrations from the engine and transmission were relatively subdued, a true rarity for the class.

Power only comes from a 1.6-liter four-cylinder engine with 122 horsepower and 114 lb.-ft. of torque.

The S offers a choice between a five-speed manual or the continuously variable automatic transmission, but all other models feature the latter as the standard setup.

While the engine posts modest gains over the old Versa, it doesn't transform the car into an engaging or sporty one. Power is adequate in most situations, as is the case with many cars in this class, with an estimated 0-60 mph time of 9 seconds. But reviewers point to the likes of the Honda Fit and Toyota Yaris being vaguely fun to drive even with their small engines.

Still, the Versa's powertrain doesn't strain like something similar to the Chevrolet Spark or Mitsubishi Mirage. And complaints generally centered around the adequacy of the Versa's driving experience. It's comfortable but forgettable. In a group of vehicles typically dominated by buzzy hatchbacks or too-light controls, the Versa swings for a higher class at the expense of outright driving fun.

TL;DR: The Versa remains relatively efficient, but larger cars do better in this regard.

The EPA rated the 2020 Nissan Versa with its CVT automatic at 32 mpg city, 40 highway, and 35 combined. That's a slight improvement over the 2019 model equipped with a similar transmission. It's also on par with the Toyota Yaris and its six-speed automatic, and around two MPG better than the most efficient version of the Chevrolet Spark.

The other issue is that the Versa isn't that efficient when compared to some larger compact sedans. The Hyundai Elantra is rated at 36 mpg combined, as is a Honda Civic 1.5T. This could be something to consider if you're buying a subcompact car with fuel economy in mind.

TL;DR: The Versa represents strong value for money, considering its equipment and space.

Buyers will be tempted by the Versa's low base price and generous list of standard features. But there's a risk of being tempted by too many upgrades, pushing the price into the realm of larger compact sedans that are more substantial and just as efficient.

Still, that makes it all the more impressive that the 2020 Versa isn't a bare-bones car, but one that comes with standard safety features such as automatic emergency braking. Higher trim levels offer Android Auto and Apple CarPlay, digital instrument display, and even adaptive cruise control.

All versions of the Versa offer a stylish interior that's greatly improved over its predecessor and on par with the standards of the class. Despite not being offered as a hatchback, the trunk is commodious, and most offer a folding rear seat. It may not be the roomiest four-door, but it will likely meet the needs of individuals who may need a backseat for occasional use.

The Versa's improved driving experience is said to go a long way to shedding its status as Nissan's least-expensive car. But an engine that needs more power may remind drivers that a slightly larger compact car may be more satisfying and not much more money. In fact, top versions of the Versa are nearly $20,000, and some compacts can be had for slightly more. That's something to consider, too, if fuel efficiency is a consideration.

Here's a look at the various trim levels of the Versa:

Nissan Versa SV
The SV starts at $18,535, including destination. In addition to the S, the SV makes the CVT standard, along with 16-inch alloy wheels, upgraded cloth upholstery, blind-spot warning, heated outside mirrors with integrated turn signals, and a 7-inch touchscreen infotainment system. Apple CarPlay and Android Auto capabilities are also included.