Would we buy one? Probably not.

Powertrain: All trim levels (except the hybrid) share a 2.5-liter inline four-cylinder engine with an output of 170 horsepower.

A CVT automatic transmission system and front-wheel drive are standard. All-wheel-drive can be added to any model for $1,350.

There is an SV hybrid option, which has a 2.0-liter inline 4-cylinder gas/electric motor that produces 176 horsepower.

The 2018 Nissan Rogue overtakes its rivals with an unusually high level of collision-avoidance technology that comes standard across all the trim levels. You would have to pay extra for some of this safety tech if you explored the Honda CR-V; however, the Honda does have a higher safety score.

The NHTSA gave the Rogue an overall rating of four out of five stars. It received four stars in the rollover and frontal crash tests and five stars for the side crash test.

2018 introduced the ProPilot Assist System, which offers advanced safety features. Although it is still limited, it is a big step towards self-driving cars.

The 2018 Nissan Rogue is one of the brand's most popular models and is just one of the compact SUVs available in a hybrid option. There are three trim levels, including the S, SV, and SL.

The base S model starts at an MSRP of just above $25,000, including the $975 destination charge. There is no hybrid option for this trim.

The SV trim has more standard features, and this gasoline-only trim has an MSRP of around $27,000 (including destination charges). The SV hybrid has a pricing of $1,000 higher.

The top-of-the-line Rogue SL trim has an MSRP of $32,000 (including the destination charge) and if you want the hybrid version, expect an add-on premium of $1,200.

2018 introduced the new SL Platinum Package, which features the ProPilot Assist technology. This technology is an industry-first below the $35,000 mark.

The above pricing is for front-wheel-drive models only. If you want all-wheel-drive, then add on $1,350 to the base pricing. Competitively, this Rogue's cost runs fairly close to its rivals, except for the richer 2018 Kia Sportage.

The biggest highlight for 2018 was the introduction of the ProPilot Assist tech that gives the crossover the ability to drive independently without human intervention for short distances. This technology is, however, limited in its real-world usefulness.

All Rogue models come with an impressive array of safety features, many of which you would have to pay extra for on rival crossovers. Standard infotainment features include Bluetooth, a four-speaker audio system, satellite radio, and the 7.0-inch screen with Apple CarPlay and Android Auto.

The physical buttons and knobs around the touchscreen allow for easy audio adjustments. However, the display is fairly small, difficult to reach, and the graphics quality is poor.

Both rows can comfortably seat five people in the Rogue. The front row of seats are supportive and provide ample headroom. However, there is less headroom in the second row.

Legroom can be increased for the back row with its sliding second-row seats that add extra space for those passengers in the back.

The LATCH anchors in the 2018 Rogue are challenging to use when fitting a child seat and sets it back behind its user-friendly rivals, such as the Toyota RAV4.

The flexible Divide-n-Hide rear cargo storage system is intuitive and allows you to create shelves and hide items in cubbies. The Rogue offers one of the largest cargo capacities within the compact SUV class, providing 39.3 cubic feet of cargo space behind the second-row and 70 cubic feet when the rear passenger seats are folded down.

The Rogue's towing capacity is 1,000 lbs., which is low for its class.

Many reviews have described the 2018 Rogue as unadventurous, but its styling follows most modern crossovers with its tall body, unpainted fender flares, and high beltline.

The base Rogue S trim lacks tinted windows and features plastic hubcaps that offer a slightly down-market appearance. Still, the SV and SL trims are more attractive with exterior chrome finishes. The edgy headlights, "boomerang" taillights, and the "V-motion" grille offer a modern finish. The interior features quality materials, and the plastics are not overbearing and are soft to the touch.

A Midnight Edition Package blacks out portions of the exterior trim and wheels. The SL Premium Package adds LED headlights and a panoramic moonroof, and the SL Platinum Package adds 19-inch alloy wheels.

The leather-wrapped fully adjustable steering wheel is soft and offers ample legroom below it. Most controls have been placed logically, but the turn-signal stalk is hard-to-reach, and the infotainment screen is distant.

The seat height is taller in the Rogue compared to its rivals, which means getting into and out of the crossover is easier.

Compared to its rivals, the four-cylinder engine of the 2018 Rogue is weak and does not provide a sporty response. The 2018 Honda CR-V has a powerful turbocharged engine, while the 2018 Toyota RAV4 boasts quicker acceleration.

The Rogue is underpowered, and the Xtronic CVT automatic transmission tends to drone on and is relatively noisy. Unlike the 2018 Subaru Forester's CVT, the Rogue is missing paddle shifters and fixed-ratio points. This slows down Nissan's predictable response rate.

While it may be slow to overtake other vehicles, the Rogue offers a balanced and smooth ride, even over rough pavement.

The braking pedal feels soft, but the overall braking system is highly effective, and the Rogue handles well around tight corners.

The 2018 Rogue is well-suited for light off-roading and offers more hardware than many of its rivals. AWD models provide a locking center differential and hill descent control.

The 2018 Rogue is one of the thriftiest compact crossovers in its class regarding fuel economy with up to 29 mpg combined.

The FWD Rogue has better fuel economy than the AWD models, thanks in part to its light weight and reduced mechanical complexity. The EPA rates its fuel efficiency at 26 mpg city, 33 mpg highway, and 29 mpg combined. If you choose an AWD model, then the EPA rating changes to 25/32/27 mpg. A Rogue Eco model is available; however, it only dials back the throttle response and doesn't impact the fuel economy. 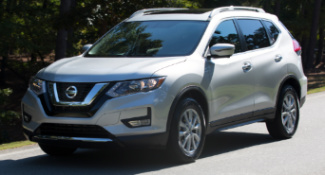 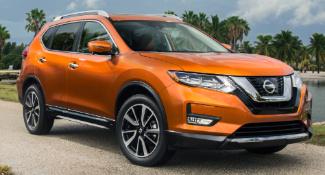