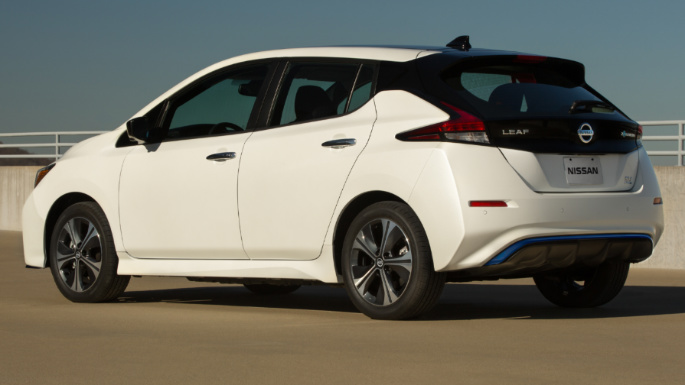 The 2020 Nissan Leaf is one of the numerous all-electric vehicles on sale today as automakers increasingly rely on them to meet stricter emissions standards and as consumers get more interested in alternative fuels. The difference is that the Leaf has been on sale since 2011 and is now in its second generation, making it a veteran in this relatively new segment.

The Leaf was redesigned for 2018 with a 40 kWh battery and a 150-mile range according to the EPA.

Rivals to the 2020 Leaf include the Chevrolet Bolt, Hyundai Ioniq Electric, Hyundai Kona EV, Kia Niro EV, Mini Cooper SE, and Volkswagen e-Golf (which goes off sale in 2020). The Tesla Model 3 Standard Range Plus could also be considered a rival to the Nissan Leaf Plus.

Prices for the 2020 Nissan Leaf start from $32,525 for a base model with the shorter range to $44,825 for a fully equipped Leaf SV Plus. These numbers are before any applicable federal and local incentives, which Nissan says can trim as much as $10,000 off of the manufacturer’s suggested retail price (MSRP).

TL;DR: Recognizable as a Nissan Leaf, but doesn’t stand out the way some electrics do. 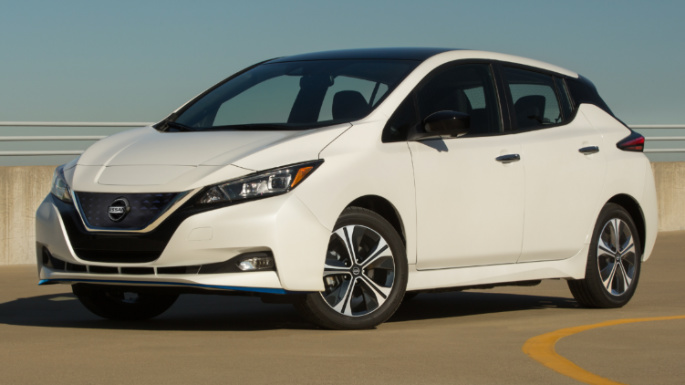 The 2020 Leaf may look a little odd among mainstream hatchbacks, but it hardly screams that there’s anything different going on under the skin.

When the first Leaf debuted in 2011, it featured some different styling choices and was recognizable as something a little new. Nissan toned that down, though, when the current generation was released for 2018 to the delight of consumers interested in electric cars but didn’t want to appear conspicuous.

Apart from a mostly faceless front end with a big Nissan emblem on the door for the charge port, the Leaf could be mistaken for any compact hatchback, or a relative of a Nissan Sentra, for example.

That works if you’re a fan of vehicles like the Mini Cooper SE or Volkswagen e-Golf, which are hardly changed externally from their gasoline-powered counterparts. But models like the Chevrolet Bolt, Hyundai Ioniq Electric, and Tesla Model 3 are much more recognizable as something different.

TL;DR Functional, but the Leaf lacks the wow factor of even some other hatchbacks. 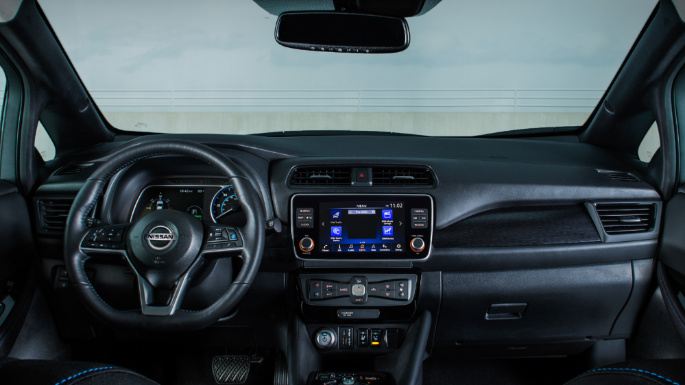 Beyond the conventional exterior, the Leaf’s interior is even more so, perhaps even bland. But what it gives up in styling flourishes it keeps in functionality.

Even though the current Leaf is only in its third year, it already lacks some of the design flourishes that are starting to become required on compact cars, let alone ones that are only available as electric cars. There is a lot of black plastic, and fewer soft-touch surfaces than expected of a new compact car or even a $45,000 car – as the Leaf’s price can climb rather quickly.

Still, drivers are greeted with a steering wheel with multimedia control buttons, a partially digital instrument cluster, an 8-inch touchscreen infotainment system, and optional amenities such as a power driver’s seat, leather upholstery, and an upgraded audio system. 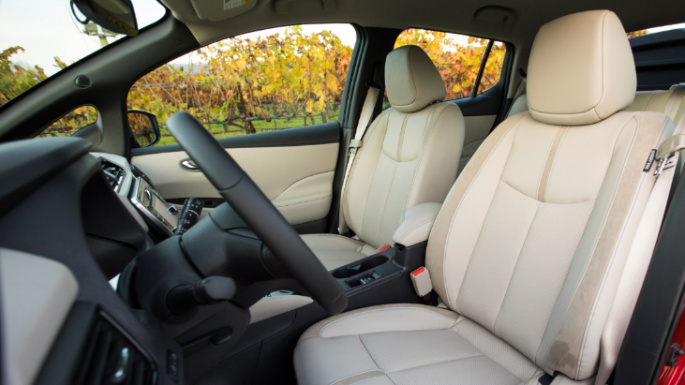 And the somewhat staid exterior looks make the Leaf easier to live with. Tall doors and a slightly elevated driving position because of the battery placement makes it easy to get in and out. Rear-seat passengers have to make do with an even higher perch, and the seat isn’t really wide enough for three across. Still, the Leaf is an entirely viable four-passenger vehicle, which isn’t something a lot of other inexpensive electric cars can say. 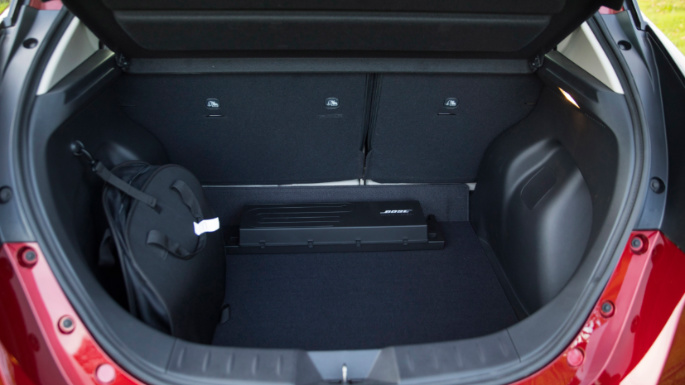 Another place where the Leaf’s shape does it favors is in practicality. Its ease of entry and exit is matched by useful space, even if it’s partially obscured the battery pack.

The Leaf has 23.6 cubic feet of space behind the rear seats, which is almost identical to space in a VW e-Golf, itself rather generous among compact hatchbacks. It has roughly triple the room of the small Mini Cooper SE behind its rear seats and even marginally more than the Chevrolet Bolt and Hyundai Kona EV “crossovers.” It’s unfortunate, though, that the Leaf doesn’t do anything to provide a flat cargo floor when the rear seats are folded. There’s a noticeable ledge created by the battery under the rear seats, making loading difficult, and the subwoofer for the optional upgraded sound system is mounted on the cargo floor. All of the Leaf’s key rivals do this better.

TL;DR Controls are user-friendly, but the Leaf doesn’t break much new ground. 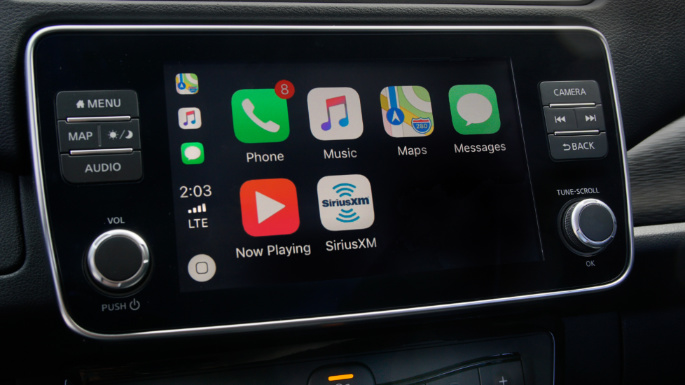 What the Leaf lacks in outright audacity when it comes to the interior technology it makes up for with refreshingly easy to use controls. That might make newcomers to electric vehicles feel a little more at ease.

Just like the interior styling, the Leaf’s infotainment system doesn’t break much new ground. The driver sits in front of a part-digital, part-analog instrument panel that is easy to use and displays a reasonable amount of information – and is also reasonably high in quality. An analog speedometer sits to the right of a digital display that can be altered to show information about the efficiency, battery life, as well as multimedia, navigation, driver assistance systems, and vehicle settings. These are controlled with buttons on the steering wheel, so the driver doesn’t have to fumble for the right switch.

The 8-inch touchscreen infotainment system that comes standard on all Leaf models is typical to that of most recent Nissan models. It also features physical knobs for volume and tuning, as well as a few buttons for commonly used functions such as radio band and navigation. It’s not the best-resolution display, nor the most logically laid out, but to many, it will be easier to use than that found in a Tesla Model 3 or the knob-based controller in a Mini. Apple CarPlay and Android Auto are standard on all models, while built-in navigation is standard on all but the S models. The navigation system also includes listings for EV charging stations through the SiriusXM satellite radio subscription.

There are also physical controls for the climate control and heated seats, though they may be too low down in the dash for some. 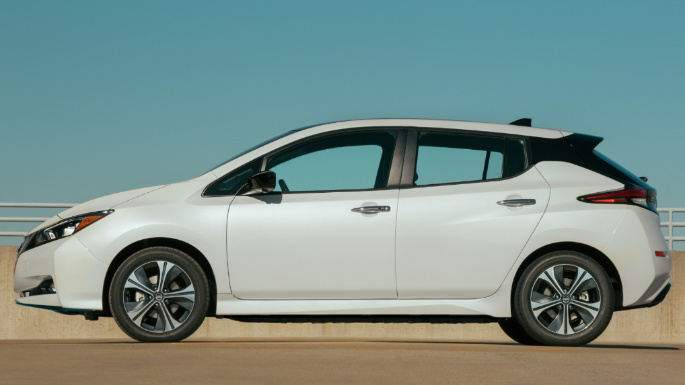 The 2020 Nissan Leaf has been bestowed with a comprehensive list of standard driver assistance features and is also available with some more advanced equipment to avoid crashes altogether.

This year, all models get the Nissan Safety Shield 360 suite of technology. It primarily consists of automatic emergency braking with pedestrian detection, adaptive cruise control, blind-spot warning and lane-departure warning, automatic high beam assist, and rear cross-traffic alert with braking. These features are increasingly standard on vehicles, but models like the Chevrolet Bolt still make them options. Standard on the Leaf Plus SL and optional on the Leaf SV and Leaf Plus SV is the ProPilot Assist system. It has an active lane-keep assist system and centers the steering to keep the vehicle in the lane on a highway, even allowing for some steering wheel movement as the road curves. While advanced for a small, mainstream car, it still doesn’t do nearly what the Tesla Autopilot system sets out to do. In any case, hands must be on the wheel at all times.

A backup camera is standard, but a 360-degree surround-view monitor comes on SL and is available on SV models.

Neither the National Highway Transportation Safety Administration (NHTSA) nor the Insurance Institute for Highway Safety (IIHS) has put the 2020 Nissan Leaf through crash tests.

TL;DR Competent for a mainstream EV, but driving enthusiasts will look elsewhere.

The Nissan Leaf is most at home being driven in an eco-conscious way, rather than trying to take advantage of the instant torque that electric cars have built a reputation for.

That’s not to say the Leaf is exactly dull to drive. Instead, it excels at being a comfortable car for urban settings or commuting. Reviewers say the suspension is soft and the ride generally compliant, made even more so by the relatively heavy battery being under the seats. That gives the driver a slightly better sense of solidity that isn’t necessarily a given on a compact hatchback – the Leaf weighs between roughly 3,600 and 4,000 pounds, depending on the model. While that may appeal to those coming from a larger vehicle, or even an SUV, the Mini Cooper SE, and VW e-Golf all have faster reflexes in the corners and feel more like the gasoline-powered vehicles on which they’re based.

The standard Leaf comes with a 110-kW electric motor that makes 147 horsepower, mated to a 40 kWh lithium-ion battery pack. That’s better than a Hyundai Ioniq Electric, Mini Cooper SE, or VW e-Golf. The Leaf Plus models swap in a 160-kW motor with 214 horsepower and a 62 kWh lithium-ion battery. While it does have more power, it also weighs more and is therefore bested by the Chevrolet Bolt and Tesla Model 3 Standard Range Plus. All Leaf models are front-wheel drive, unlike the Tesla.

Power is sufficient for highway driving, although that will erode the range more quickly. But for those looking for a ludicrous mode or enough torque to do burnouts in an electric car, the Leaf is not the ride of choice. Those seeking an electric vehicle with sufficient power for getting out of trouble, however, should be satisfied.

Ratings from the Environmental Protection Agency for the 2020 Nissan Leaf are not yet available. The mechanically similar 2019 Leaf was rated at 150 miles of range by the EPA, with the 2019 Leaf Plus at 226 miles.

The 2020 Chevrolet Bolt, with its upgraded battery, has an EPA-estimated range of 259 miles, with the 2020 Hyundai Ioniq Electric estimated at 170 miles. A Tesla Model 3 Standard Range Plus is estimated to have a 250-mile maximum range. Meanwhile, the VW e-Golf is rated at 123 miles and the Mini Cooper SE at just 110 miles.

A 2020 Hyundai Ioniq Electric is rated at a combined 133 MPGe, while the Tesla Model 3 Standard Range Plus tops the EPA’s charts at 141 MPGe.

TL;DR Expensive for a compact car, but still one of the least-expensive new EVs on sale

The Leaf is offered in three trim levels, two of which are offered in two different battery sizes, the 40 kWh and the 62 kWh known as the Leaf Plus. Keep in mind, all of these prices are before any applicable tax credits or other subsidies. Many states offer significant incentives -- plus the federal tax credit -- so your true cost is often thousands of dollars less than the MSRPs listed here.

The Leaf S Plus adds the 62 kWh battery, 16-inch alloy wheels, and a 100kW quick charge port for fast charging. 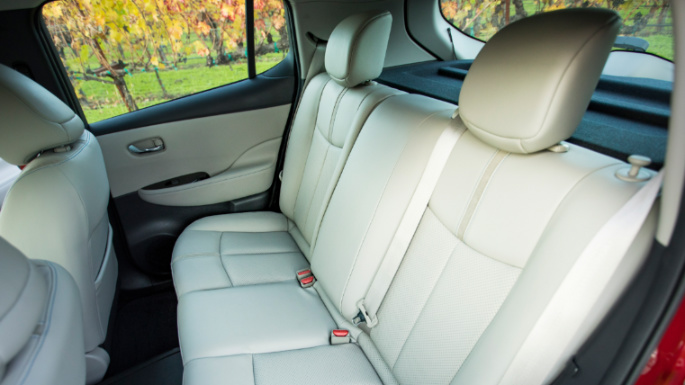 The 2020 Nissan Leaf still presents consumers with a relatively affordable way into the electric vehicle lifestyle.

It may not be particularly flashy on the outside, break much new ground in terms of interior technology or even in battery range. Still, the 2020 Leaf is noticeably normal to drive, and that’s a good thing for those cautious of new technology.

The Chevrolet Bolt has been around for a while and was recently given a range bump to 259 miles while offering a little more interior space than the Leaf.

And then the Tesla Model 3 Standard Range Plus has 250 miles of range and a slightly more premium ambiance than the Leaf. It’s not as practical, and options are expensive, but base versions aren’t much more than a well-equipped Leaf Plus.

But the Nissan Leaf represents good value for those who can comfortably live in its range, especially the 150-mile version that makes this one of the least expensive new EVs on the market. It’s ultimately a practical hatchback without complicated controls or fussy design cues and a focus on one of the significant alternative fuels of the future.