The Kicks is a subcompact crossover from Nissan that was first introduced for the 2018 model year. 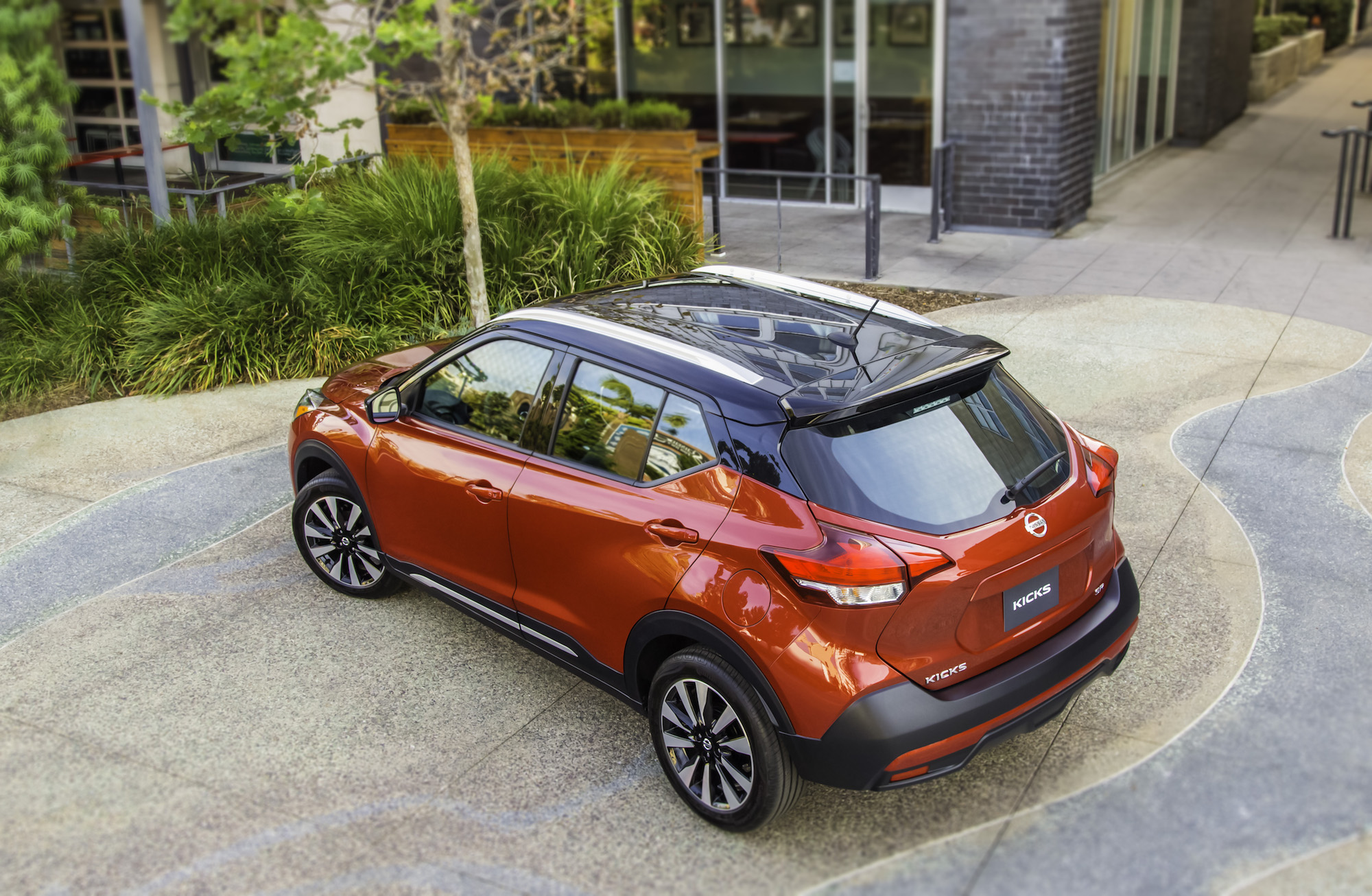 It’s the smallest and cheapest crossover Nissan builds; the rest of the lineup consists of the compact Rogue Sport and larger Rogue, the luxury-minded Murano, the three-row Pathfinder and full-size Armada beheamoth.

It comes standard with a 1.6-liter four-cylinder engine that makes 122 horsepower and 114 pound-feet of torque. This power is sent to the front wheels via a CVT gearbox (the Kicks is front-wheel-drive only, no all-wheel-drive is offered).

The drive. Ok, so don’t take it to the drag strip on the weekend, but the Kicks offers a healthy amount of acceleration from its small four-cylinder engine engine. All models come standard with 122 horsepower, which is less than nearly all of its rivals. But the only time this becomes is high in the engine’s RPMs when you’re really leaning on the gas. In normal daily driving, it was more than fine. 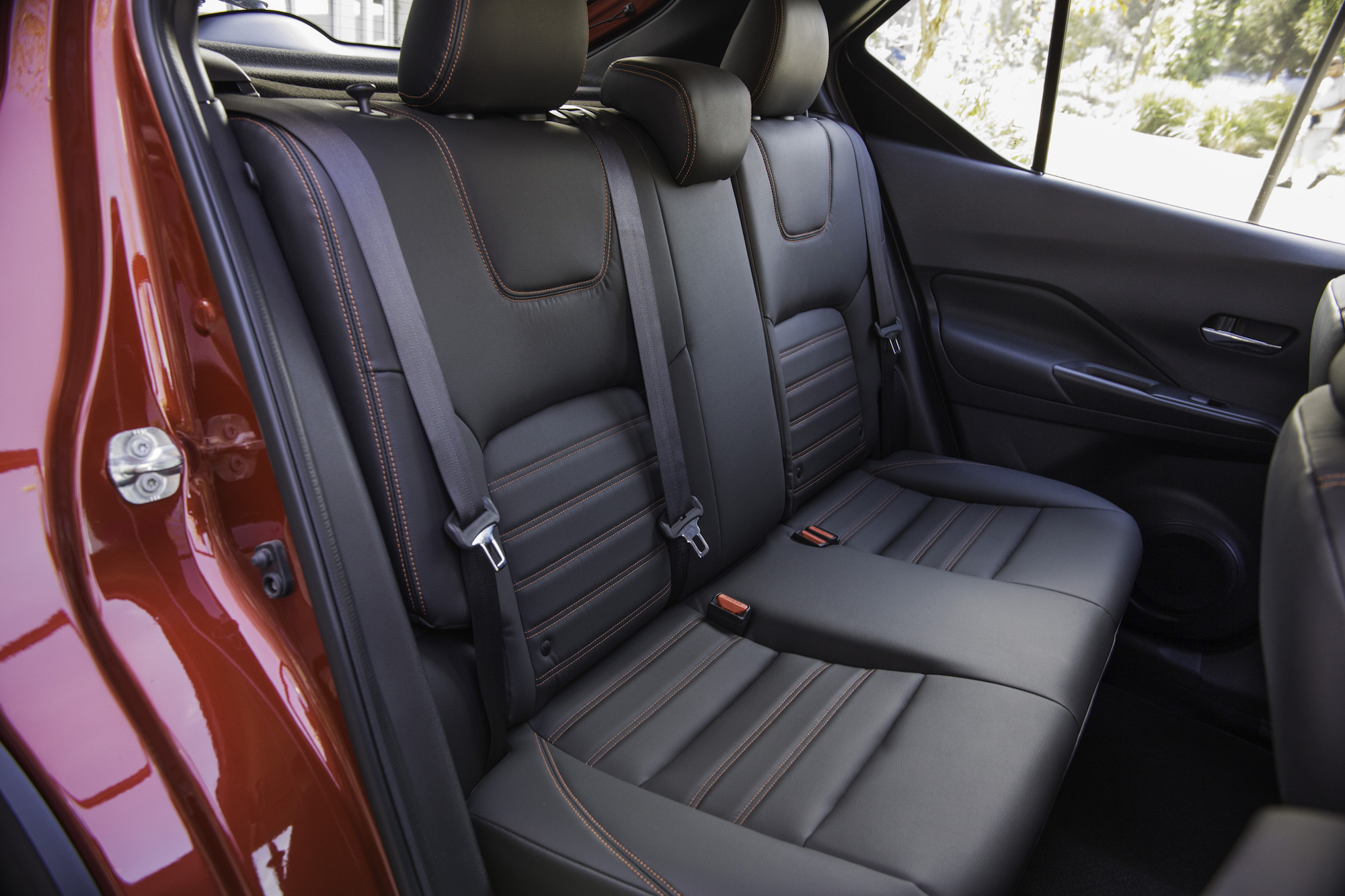 The size. The Kicks manages to give you the best of both worlds. It’s a small vehicle with a tight turning radius so it’s easy to park and maneuver in tight situations. BUT it promises plenty of interior space for both passengers and cargo. And unlike other vehicles in this small segment, the Kicks gives you plenty of room for tall passengers in the rear seats. That’s a crucial win-win for us.

Efficiency. With a small engine and a light curb weight, the Kicks manages to be one of the most fuel-efficient models in this segment, easily beating rivals from Honda, Toyota and Ford.

The steering system. This was our biggest complaint about the Kicks: its numb and unresponsive steering system. We test hundreds of vehicles a year so we’re used to adapting to a new steering feel, but the Kicks took longer to get used to than any vehicle in recent memory. The steering always felt numb and disconnected from the front wheels and it seemed to override or ignore smaller inputs at times. So test drive the Kicks in a variety of situations to make sure you could live with it. 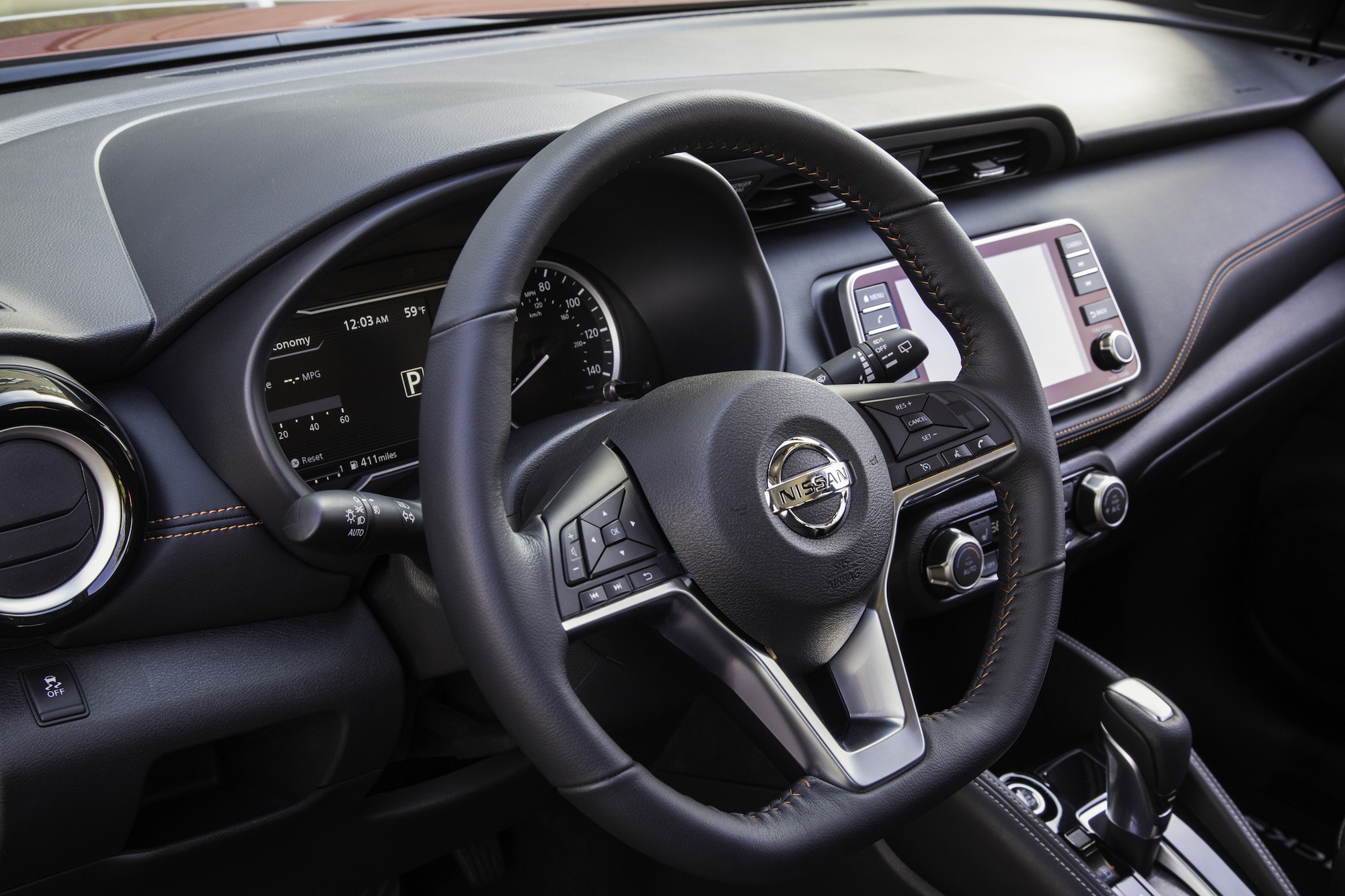 No all-wheel-drive. Unlike some of its competitors (Chevy Trax, Ford EcoSport, Honda HR-V, Jeep Renegade) the Kicks comes only in front-wheel-drive; no all-wheel-drive option is available. This is a bummer for people in colder, snowier climates who are looking for dependable traction in their bite-sized crossover.

Exterior styling. We didn’t love the looks of the rear end or the Kicks’ silhouette; both seemed ungainly when compared to rivals like the Mazda CX-3. Not a deal breaker though. 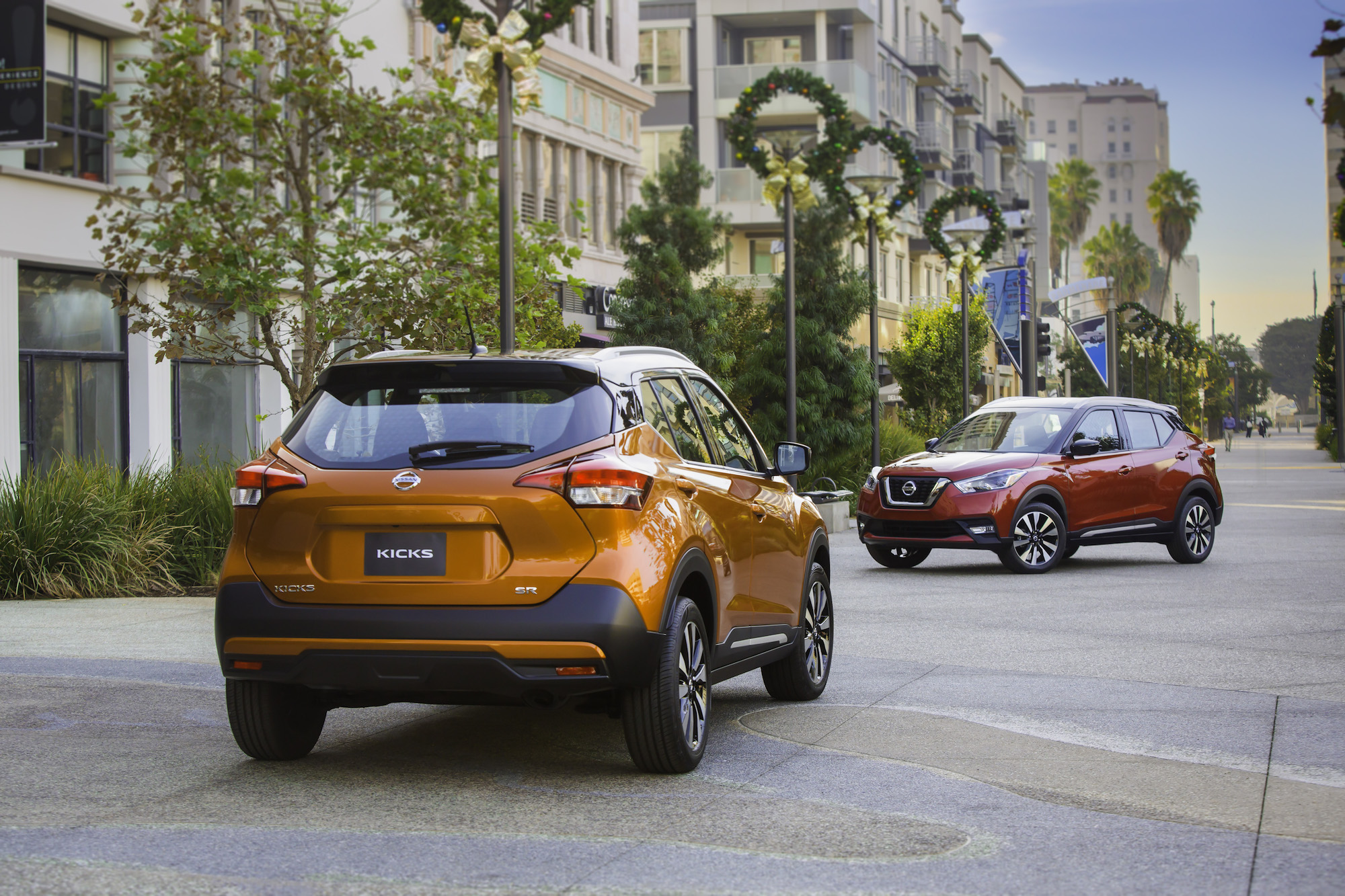 As mentioned, there are three trim levels on the Kicks.

The SV starts at $21,245 and adds to the S things like Apple CarPlay and Android Auto connectivity, a seven-inch digital display in the instrument panel, blind-spot monitoring, rear cross-traffic alert and 17-inch alloy wheels. This would be the model we’d opt for since it adds some safety tech and extra connectivity without breaking the bank. 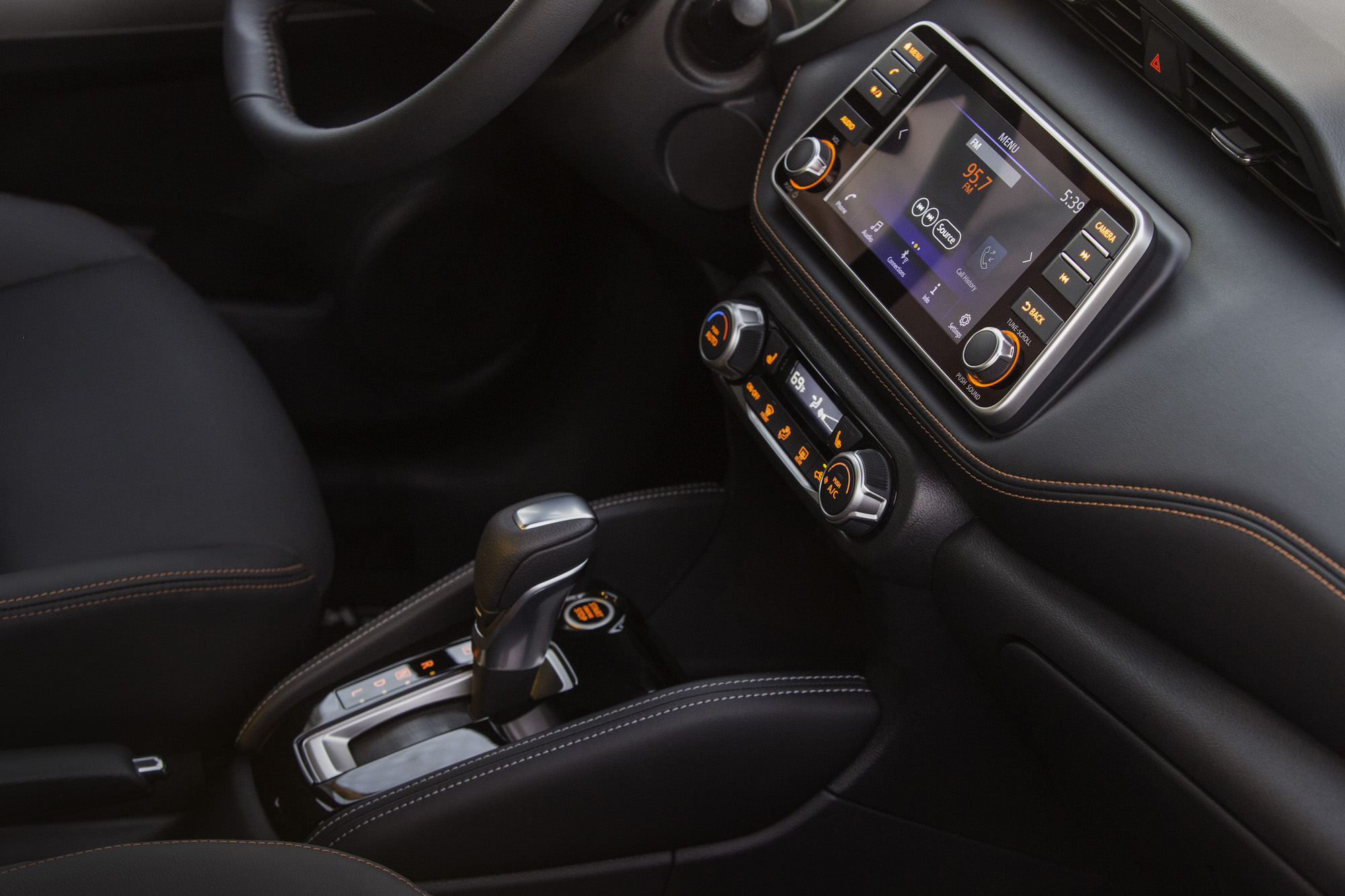 The Kicks is in a busy class of bite-sized crossovers that’s getting more competitive with each year. While this Nissan is one of our favorites, here’s a look at how some of its peers stack up.