Would we buy one? Probably not; we'd opt for something used instead.

The 2020 Mitsubishi Mirage comes with federally mandated safety equipment but no advanced driver assistance technology. It has electronic stability control, anti-lock brakes, traction control, a tire pressure warning light, rear child safety locks, and a rearview camera. There are seven airbags, including a knee airbag for the driver's seat. Subcompact commuter cars tend to offer some of the fewest driver safety aids of any vehicle class, primarily because of their very low starting prices. Some of the Mirage's competitors lack standard driver tech, like the Chevrolet Sonic, while the Toyota Yaris comes with forward-collision warning and automatic emergency braking as standard equipment. Other small cars, like the Kia Forte and Nissan Versa, also get lane-departure warning included. The Versa also has pedestrian detection technology. The Honda Fit offers adaptive cruise control.

The Insurance Institute for Highway Safety's crash evaluation of the Mirage was not impressive. While most subcompact cars received the top Good score in all crash-test segments, the Mitsubishi Mirage got a Marginal in the small overlap front driver-side test. The IIHS awarded to the 2020 Kia Forte and Hyundai Accent. The Mirage, however, did score a Good in the child seat anchors segment, which tests how easy it is to connect a child safety seat to the rear seat. None of the Mirage's major competitors scored as well in this area.

The National Highway Traffic Safety Administration (NHTSA) rated the structurally identical 2019 Mitsubishi Mirage four stars in overall testing, out of a possible five stars. It includes an overall two-star rating in the side pole (side crash) subcategory and four stars in rollover. Some of the Mirage's competitors also received overall four-star scores, but none got a two in the side pole test. Standout small cars include the Chevrolet Sonic and Toyota Yaris, which got overall five-star ratings.

With pricing starting at $14,990, including destination charge, the 2020 Mitsubishi Mirage ES trim is one of the least-expensive new cars on the market. The Chevrolet Spark slightly beats it, at $14,395. At such a price point, it will be difficult for some shoppers to overlook the fact that a new car costs under $15,000. And being a new car, the Mirage comes with a warranty -- one of the best in its category. There's a five-year/60,000-mile bumper-to-bumper coverage and a ten-year/100,000-mile drivetrain warranty. Five years of roadside assistance also comes included. Only the Hyundai Accent and Kia Rio can match those terms.

But besides its super-low price, fuel efficiency, and warranty coverage, there aren't many other things that contribute to the Mirage being a better value than its rivals. It doesn't come with any advanced safety assists, the cabin isn't particularly roomy or refined, its engine lacks power, and it doesn't have outstanding predicted reliability or depreciation. Overall, the tiny Mitsubishi contains many of the strengths and flaws associated with the basic transportation stereotype.

A seven-inch touchscreen is standard, and while it's easy to see and intuitive, it's surrounded by small physical buttons and knobs that don't feel exceptionally high-quality. It's one of the few new small cars to offer a CD player still, though. A four-speaker sound system, Bluetooth streaming audio, and hands-free calling are also standard, though Apple CarPlay and Android Auto connectivity only come on upper trim levels. The base Toyota Yaris comes with the smartphone apps mentioned above, satellite radio, and a six-speaker audio system. The Chevy Sonic and Spark come with a WiFi hotspot.

The Mirage has fairly good interior storage, with four cup holders, front door bins, a glove compartment, and a couple of center console trays. The Mitsubishi Mirage G4 sedan has an average 12.6-cubic-foot trunk, while the hatchback features 17.1 cubic feet of space. Few other subcompacts can hold as much cargo.

The Mirage's front-wheel-drive gives it good traction in mixed weather conditions, while drivers can choose between a five-speed manual transmission or CVT. Mitsubishi offers an All-Weather Package that includes a cargo tray and rugged floor mats. A cargo mat, cargo net, front and rear mudguards, and scuff plates are also available, further enhancing the Mirage's versatility.

While it received some updates for 2017, the Mirage's basic design dates to 2014, and it shows. The body's silhouette lacks the sleek lines of rivals like the Toyota Yaris and Hyundai Accent. The sedan is the more attractive of the two body styles, as its long trunk better balances the small car's rounded proportions.

The Mirage has a similarly straightforward interior style to the Mitsubishi Outlander Sport SUV. The black interior color scheme, polished steering wheel and dashboard accents, and minimalist user controls give the Mitsubishi a clean and straightforward appeal. Cloth upholstery comes standard on all trims. Rivals like the Toyota Yaris have available leatherette seats, while the Honda Fit's EX-L model comes with leather upholstery. Those and other models also have higher-quality interior materials and quieter cabins.

Upper trim levels like the Mirage SE and Mirage GT come with keyless ignition, a leather-wrapped steering wheel, and fog lights. Alloy wheels are available. The GT also gets heated front seats and high-intensity discharge (HID) headlights. There is adequate passenger space, with 41.7 inches of front-seat legroom and 34.2 inches for the rear seat. The headroom is also about average for the class.

Though the Mirage is a lightweight car, its 78-horsepower engine still feels underpowered. It struggles in passing cars on the highway and climbing steep hills. The available transmissions work well and shift smoothly. Handling is agile, helping the Mirage get in and out of parking spots with ease. It's a cinch to maneuver it in and out of traffic, though the engine's slow acceleration can let it down in this regard.

The ride could be softer and quieter, and recently-redesigned competitors like the Toyota Yaris and Kia Forte have more refined suspensions that nicely balance sportiness with comfort. Outward visibility is good, thanks to small side pillars, though there are no available blind-spot or rear cross-traffic technologies to assist the driver.

Fuel economy is one of Mitsubishi's strong suits. The Mirage's tiny three-cylinder engine and available CVT give it near-hybrid efficiency, with an EPA-estimated 36/43/39 mpg city/highway/combined for the Mirage hatchback model. Those numbers dip just slightly for the sedan. With the manual transmission, the Mirage hatch returns 33/41/36 mpg.

Those gas mileage numbers are hard to beat. The Hyundai Accent comes close, at 36 mpg combined, while the Toyota Yaris returns 34 mpg overall, and the Honda Fit and Chevrolet Spark get 33 mpg. 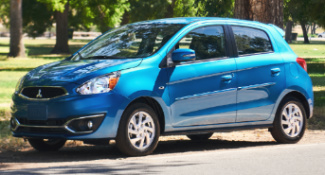 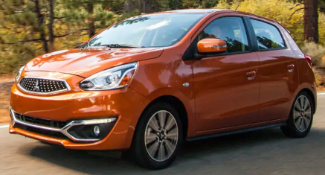