Powertrain: A 3.6-liter V6 with 290 horsepower and 260 pound-foot of torque, with an 8-speed automatic transmission and rear-wheel-drive or four-wheel-drive.

A 5.7-liter Hemi V8 with 360 horsepower and 390 pound-foot of torque, with an 8-speed automatic transmission and four-wheel-drive.

A supercharged 6.2-liter V8 with 707 horsepower and 645 pound-foot of torque, an 8-speed automatic, and all-wheel-drive.

The 2021 Jeep Grand Cherokee 4WD models received a top five-star rating in overall crash performance from the National Highway Transportation Safety Administration. The two-wheel-drive models scored four stars due to a higher rollover probability. The Insurance Institute for Highway Safety rated the structurally identical 2020 model the highest Good in front, side, roof strength, and head restraint tests. But the Grand Cherokee only scored a second-lowest Marginal in the small overlap front crash test, and the lowest Poor in the passenger side test. That put it near the bottom of the scores for midsize SUVs. Models with the optional high-intensity discharge headlights were rated Acceptable, while cars with automatic emergency braking were rated Superior, the highest rating for crash avoidance.

A redesigned Grand Cherokee is due sometime in 2021, so Jeep has thrown more equipment on the current models while keeping prices mostly in check. With pricing starting at nearly $36,000 for a base Laredo two-wheel-drive model, the Grand Cherokee starts at a higher price than the Honda Passport or Nissan Murano, but it is easy to get a $45,000 Grand Cherokee to the same equipment level of those two at that price target. More luxurious High Altitude and Summit models can exceed $60,000, but come with equipment and features more in line with luxury models like the Lincoln Nautilus or even a Land Rover Discovery.

The performance models are a different story, however. The SRT starts at just under $71,000 and comes fully equipped in addition to its 470-horsepower engine about equal to where a Mercedes-Benz GLE 53 starts before adding any options, and it is still down on power. The Trackhawk and its 707 horsepower produced by a supercharged V8 from the Dodge Hellcat model comes in at around $90,000. Even adding options from its relatively short extras list does not get it near the six-figure base prices of a BMW X5 M or Porsche Cayenne. It may not be as refined, but it beats the Europeans for sheer power.

Every model uses the Fiat Chrysler Automobiles' (FCA) excellent UConnect infotainment system. Grand Cherokee Laredo E models come standard with a 7-inch touchscreen, but the 8.4-inch model that’s standard on all other trim levels is available. Its clear icons and sharp responses are augmented by a raft of physical knobs and buttons to use as shortcuts. Apple CarPlay and Android Auto compatibility are standard, too. There is also a configurable 7-inch color display in the instrument panel.

Depending on the version, options include a premium audio system, heated and cooled front seats, a heated steering wheel, power liftgate, keyless entry, remote start, rain-sensing wipers, and a rear entertainment system with a Blu-Ray player. None of this is particularly groundbreaking, as the tech is starting to show its age. But its simplicity is far better than competing systems from brands at every price.

The more noticeable demerits in terms of practicality on the Grand Cherokee are the modestly sized cargo space given the exterior dimensions and the lack of a third-row seat option. Apart from much larger models such as the Honda Pilot, VW Atlas, and Dodge Durango, none of the competition here that offers a third-row seat makes it particularly spacious, though, and third-row seating comes to Jeep later in 2021 with the upcoming Wagoneer. The Jeep’s cargo capacity is about midpack against the competition. Liftover is high, but that can be rectified with the optional air suspension system put in its lowest access setting. Rear-seat space, however, is plentiful and headroom is generous even with the available panoramic sunroof.

Towing capacity is very generous for this class, as V6 models can tow up to 6,200 pounds when properly equipped. The V8 engine-equipped versions can tow up to 7,200 pounds, which is far more than nearly every other rival. And apart from the Land Rover Discovery, the Grand Cherokee stands alone in off-road capability. The Trailhawk model boasts extra ground clearance and off-road suspension and tires, as well as the Selec-Terrain and Quadra-Lift air suspension optional Limited, Overland, High Altitude and Summit models. A Jeep Wrangler may be more accomplished, but it cannot blend in the 2021 Grand Cherokee's on-road refinement.

The Grand Cherokee’s familiar face, being around since 2010, has been usefully updated over the years. Laredo and Limited trims lack the sparkle of the higher-end Overland and Summit models, or the brash off-road styling of the Trailhawk. But all Grand Cherokees get alloy wheels of no less than 17 inches, while the 20-inch versions look particularly smart. LED lights and different levels of chrome or body kits depending on the versions make it easy to find a Grand Cherokee model to fit certain tastes.

Inside, the Grand Cherokee’s interior is dominated by the large corporate FCA 8.4-inch touchscreen and partial digital instrument panel. It is a look that’s starting to feel old, but it’s functional and easy to use. There are large cupholders and a generously sized center console. While there are few novel storage solutions, the system is sensible more than anything else. Laredo and Limited models have a typical material quality for their price range, and arguably more refined than that of the Chevy Blazer or VW Atlas Cross Sport. Overland, High Altitude, and Summit models get higher-grade leather upholstery and wood trim, but do not quite feel like $60,000 SUVs when they have modern interiors from the Volvo XC60 to contend with.

Despite its age, the Grand Cherokee is still an immensely refined SUV to drive. That is even more impressive considering how capable it can be off-road, while the truck-based Toyota 4Runner and Ford Bronco cannot match the Jeep’s noise and bump isolation. V6 models have adequate power, but lack the low-end torque of newer turbocharged models. It is also not the most agile vehicle, but the Jeep still holds its own in the corners. The optional Quadra-Lift air suspension helps soak up more bumps that larger 20-inch wheels might pick up.

All of the V8 models have a surplus of power that moves the Grand Cherokee with authority. But the SRT and Trackhawk models have lower suspension, tighter handling, and larger brakes that do their best to keep up in aggressive driving. A Porsche Cayenne is still the likely champion on a track, but the Grand Cherokee holds its own.

V6 models are competitive among similarly powerful rivals, while the V8 does not suffer too badly compared to other SUVs with a similar towing capacity. The SRT and Trackhawk models have predictably poor fuel economy given their enormous engines and horsepower figures, but other performance SUVs such as the BMW X5 M and Mercedes AMG GLE 53 do better. 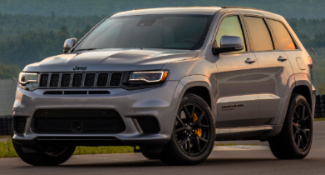 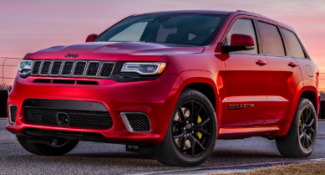