Vehicle Type: The 2022 Hyundai Tucson is a compact crossover SUV that can seat up to 5 passengers.

Price Range: The base model Hyundai Tucson SE has a starting MSRP of $25,350. A destination fee of $1,225 brings the total initial cost up to $26,575 without any further options included. Fully loaded Tucson Limited models start at $34,850, before adding the destination fees and options. Fully optioned Limited models will exceed $38,000.

Hyundai does offer Tucson Hybrid and Tucson Plug-in hybrid models for those who are more environmentally cautious. The base hybrid model starts over $30,000 with the destination fee included, and the plug-in hybrid starts at nearly $36,000.

Powertrain: Tucson’s powertrain options are simple. A 2.5-liter four-cylinder engine is the only available powerplant, and it produces 187 horsepower and 178 lb-ft of torque.

It is mated to an eight-speed automatic transmission. All trim levels come standard with front-wheel drive, but all-wheel-drive is available across the board for an additional $1,500.

Hyundai has completely redesigned Tucson for the 2022 model year, bringing it into its fourth generation of production. The most prominent difference between the current and outgoing model is its appearance. It looks much more futuristic than its predecessor, and the interior tells the same story. Reviewers note that Tucson has a much more upscale feel and appearance than previous-generation models.

Even though a larger standard engine with more horsepower has been fitted to 2022 models, fuel economy has increased over the outgoing model. An additional 3 inches to the wheelbase gives passengers and cargo some additional space in which to live.

Would we buy one? Yes! In typical Hyundai fashion, you get quite a bit of bang for your buck with the newly redesigned Tucson. 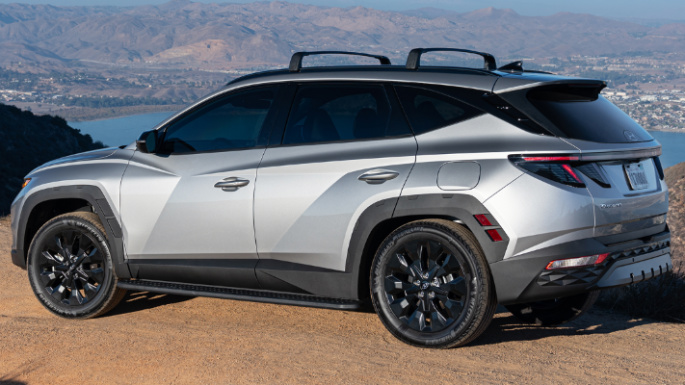 The 2022 Hyundai Tucson has entered its fourth generation of production with a bang. It has come out of the gates sporting Hyundai’s new design philosophy, and reviewers have been quite impressed with it and several other models from the Korean automaker’s lineup. Though still lacking the brand recognition of Toyota and Honda competitors, Tucson makes a compelling argument for itself with its new upscale interior, excellent cargo and passenger space, and stellar warranty.

It competes directly with other compact SUVs like the Toyota RAV4, Honda CR-V, Subaru Forester, Ford Escape, Chevrolet Equinox, Volkswagen Tiguan, Nissan Rogue, Ford Bronco Sport, Kia Sportage, and Mazda CX-5. With such a crowded and popular segment, any new vehicle would have to be pretty special to stand out, but according to reviewers, the newly redesigned Tucson does.

While its base price has gone up this year, the Tucson offers infotainment upgrades, tech upgrades, more standard safety features, more passenger space, more cargo space, a more powerful engine, a better interior, and better fuel economy than its predecessor. All of these upgrades add up to a win for both the buyer and for Hyundai. 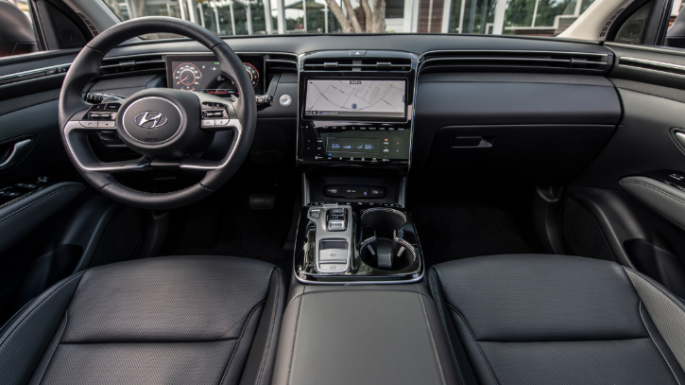 At the time of this writing, the National Highway Safety Traffic Administration has not rated the 2022 Hyundai Tucson, but the IIHS has awarded Tucson with its highest safety rating and the Top Safety Pick + award. The only two areas in which Tucson did not receive the highest safety ratings for the IIHS are the LATCH child seat system's ease of use and the headlight effectiveness.

The 2021 Tucson was also a safe vehicle, but the new 2022 Tucson has some additional standard safety and driver assistance features, bolstering its ratings. Standard safety features include forward-collision warning with pedestrian detection, automatic emergency braking, lane-keeping assist, lane departure warning, a driver attention alert system, and a rear seat system that alerts the driver to pets and children left in the vehicle. 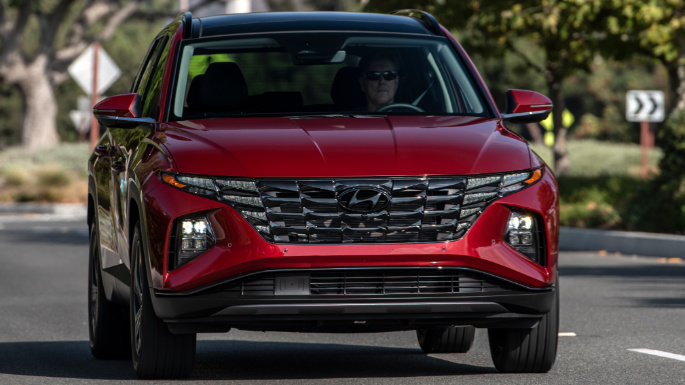 One of Hyundai’s strongest offerings has always been its provided value. Both Hyundai and Kia have vastly improved their vehicle quality over the past decade, and the new Tucson sits atop many reviewers’ top value lists. The two largest factors contributing to this are the low starting MSRP relative to others in the class and Hyundai’s excellent 10 year/100,000-mile powertrain warranty.

If there are any downfalls to Tucson’s value proposition, they would be that the performance is only adequate and that Tucson has traditionally not held its resale value as well as competing Honda and Toyota models. For most buyers, performance will not be a huge factor in their purchasing decision. Resale value may play more of a role, but both the RAV4 and CR-V cost more initially as well. 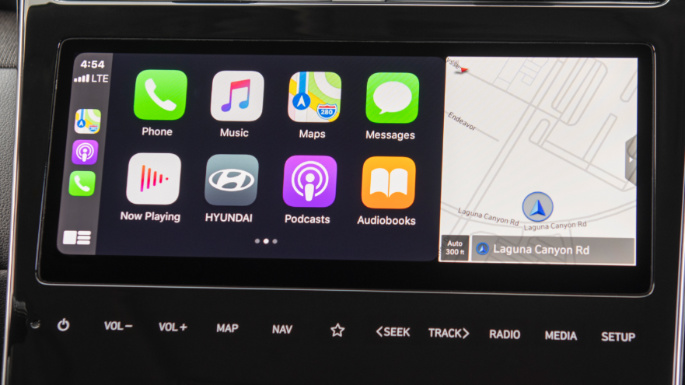 The new Tucson is not the most technologically advanced compact SUV on the road, but it has all you need and a little more to keep just about every buyer happy in 2022. Its standard infotainment system is accompanied by an 8-inch touchscreen display, HD radio, wireless Apple CarPlay, and Android Auto, Bluetooth, and a six-speaker audio system.

Reviewers note that even though a larger touchscreen is always nice, the upgraded infotainment system comes with the same lack of knobs and buttons that has made other systems from other automakers difficult to navigate. Though the infotainment system as a whole is said to be easy to use, the larger screen can be touchy, and the lack of physical controls can be frustrating, especially when driving over bumpy surfaces. 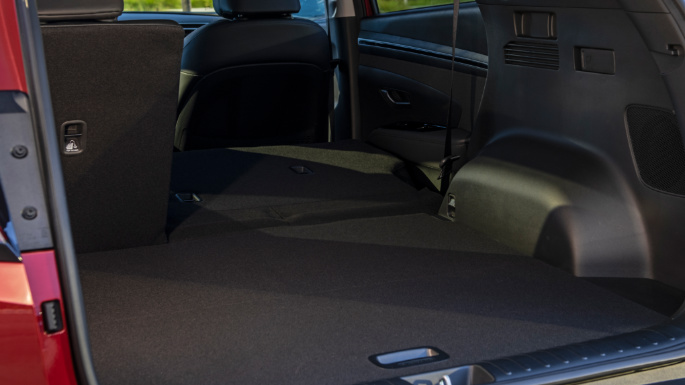 The outgoing Tucson was not impractical, but Hyundai decided to take Tucson’s practicality to the next level for the new fourth-generation model. They accomplished this by making its wheelbase over three inches longer and giving its overall length an extra six inches. The result is more passenger and cargo space, especially in the rear seats. Headroom and legroom have also been expanded slightly.

Providing 38.7 cubic feet of cargo area with the back seats in place, the new Tucson sits with the Subaru Forester and Honda CR-V as one of the best in class. Folding the rear seats down increases cargo space to just under 75 cubic feet. The optional power liftgate also helps when trying to load bulky luggage.

Getting in and out of Tucson is an uneventful task, and the additional roof from last year’s model helps. Available all-wheel-drive is an option across the compact SUV range, but the Tucson follows most other competitors’ models, offering the system more for poor weather traction rather than hardcore off-roading. Towing capacity has also increased to 2,000 pounds, making Tucson a bit more usable for those who need it. 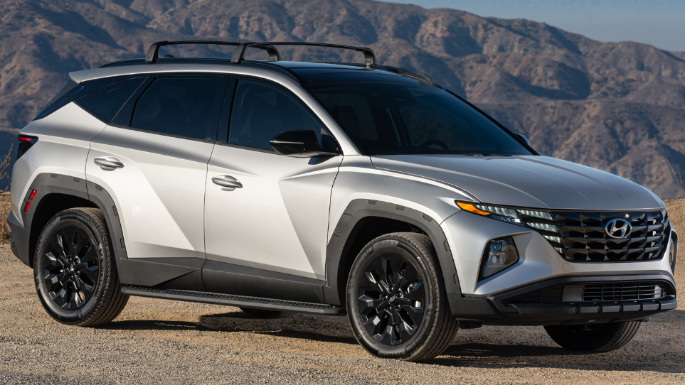 One of the biggest praises given to the new Tucson by reviewers concerns its redesigned interior. Most agree that it punches above its weight. It is not luxurious by any means, but it is well laid out, simplistic, and filled with quality materials that make it feel more upscale than the vehicle’s price point would suggest. The upgraded optional leather upholstery offers a nice compliment to this as well.

Its exterior styling is a little more polarizing. It has a distinctive front grille with integrated lighting which sets the tone for the rest of the vehicle. Sharp lines are everywhere, finishing with the futuristic, Mustang-like taillights. There are elements of the Toyota RAV4 within its design, but it is generally consistent with other Hyundai products, making it unmistakable as anything else.

Though its exterior styling is subjective, reviewers’ most consistent complaint is that the size of the rear roof pillars can obstruct vision. This is not an uncommon problem among many modern vehicles since it is a common current design element, but it should be noted. 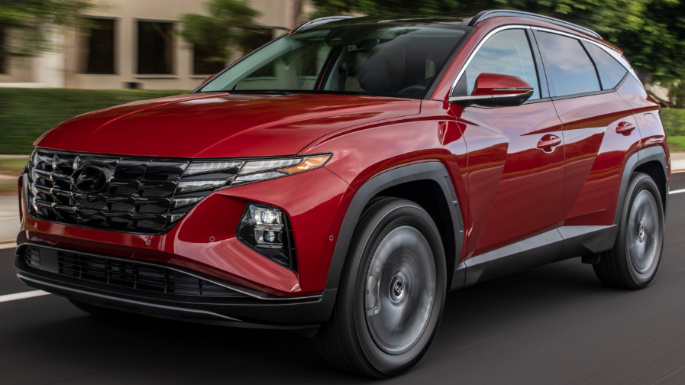 One area in which Tucson is totally mundane is in its driving experience. Most buyers will appreciate its comfortable ride, enhanced by its supportive and roomy front seats, and its comfortable rear seats. It is nowhere near the top of the class when it comes to superior handling and fun – the Mazda CX-5 sets that bar quite high. Still, most buyers are not going to buy Tucson for its handling capability.

Its powertrain is also middle-of-the-road. 187 horsepower from its 2.5-liter four-cylinder engine is adequate for everyday driving, but its lack of a turbo puts it behind several other competitors with its lack of extra punchiness. For some extra get-up-and-go, the hybrid Tucson models both provide some extra pizzazz from their electric motors and hybrid powertrain setups, both of which include a 1.6-liter turbocharged engine.

Acceleration is uneventful, and braking is quite good with a solid pedal feel. Shifting from the eight-speed automatic transmission also occurs without too much shouting, and reviewers have complimented it on its responsiveness to both up and downshift when needed. 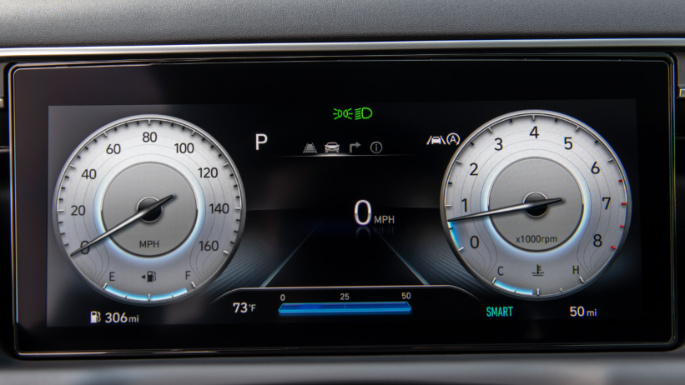 Compared to others in the class, Tucson is relatively fuel-efficient, but it cannot top best-in-class competitors like the Honda CR-V or Nissan Rogue. When equipped with front-wheel drive, the Tucson is EPA-rated for 26 MPG city and 33 MPG during highway driving, giving it a combined fuel economy rating of 29 miles per gallon. The all-wheel-drive drivetrain will drop these numbers to 24 mpg city and 29 mpg highway for a combined rating of 26 miles per gallon. 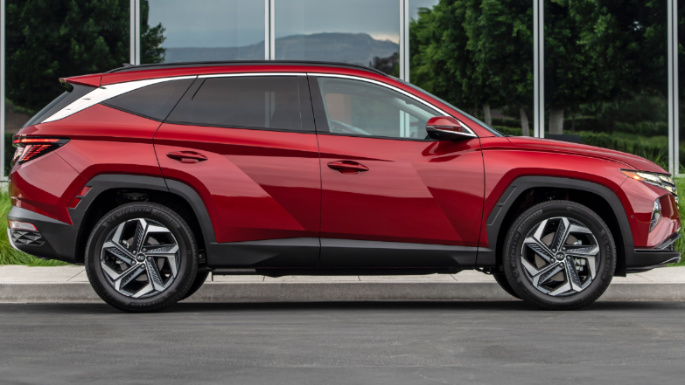 All Tucson models come standard with a 2.5-liter four-cylinder engine that produces 187 horsepower, front-wheel-drive, and an eight-speed automatic transmission. All-wheel-drive is an optional upgrade on all four trim levels that Hyundai offers for the Tucson for an additional $1,500.

The base model Hyundai Tucson SE starts at an MSRP of $25,530. Adding the $1,225 destination fee will bring the total starting cost to $26,755 before any options are added. Standard equipment at this price point includes an 8-inch touchscreen display, wireless Apple CarPlay, and Android Auto, a six-speaker stereo system, Bluetooth, keyless entry, cloth upholstery, and 17-inch alloy wheels.

Moving up to the Hyundai Tucson SEL will cost buyers a total of $27,875 with the destination fee included. Additional standard features on the SEL include a host of safety features like rear cross-traffic alert, blind-spot monitoring, adaptive cruise control, and a rear-seat safe exit system.

The Hyundai Tucson N Line is the next step up from the SEL and is considered the sportiest trim level of the four. It starts at $30,750 before the $1,225 destination fee is added. Standard features on the N Line include all the standard features from the SEL and its optional Convenience package plus the Bose audio system and some sporty styling touches on the grille, wheels, seats, and pedals. A rear spoiler is also included for some additional sporting credentials.

Standard features on the Limited trim level include all standard and optional features from the SEL in addition to a panoramic sunroof, power front seats, heated rear seats, a heated steering wheel, and several additional safety features. These include a 360-surround view camera, blind-spot cameras, a rear collision warning system, parking sensors, and a remote smart park assist system.