The 2019 Honda Pilot is a mid-size, three-row crossover SUV capable of seating up to eight passengers. This year's Pilot gets some minor styling updates, a revised infotainment system and some other new features as part of a mild revision.

The 2019 Pilot is part of the third generation introduced in 2016. It competes in a class alongside the likes of the Mazda CX-9, Ford Explorer, Toyota Highlander, Chevrolet Traverse Subaru Ascent, Nissan Pathfinder and the Volkswagen Atlas.

The Pilot's exterior styling update includes a facelift which restyles the front grille and headlamps with available LED headlights and auto on/off feature. The front bumper styling also has been updated and simplified. The rear bumper and taillights received minor updates. The taillights now feature a clear section to highlight the turn signals and the reverse lights mounted in the rear bumper have moved to the tailgate. 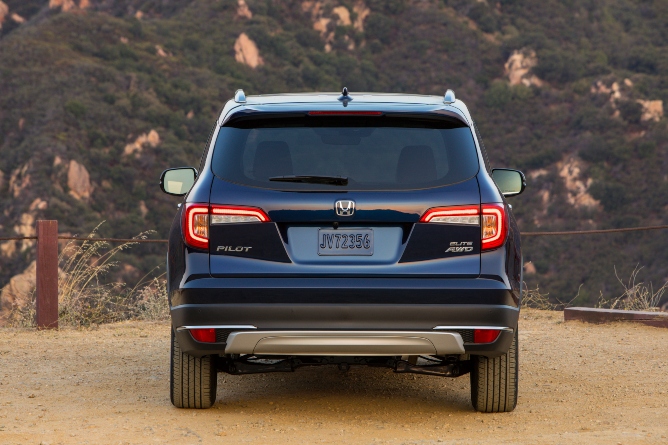 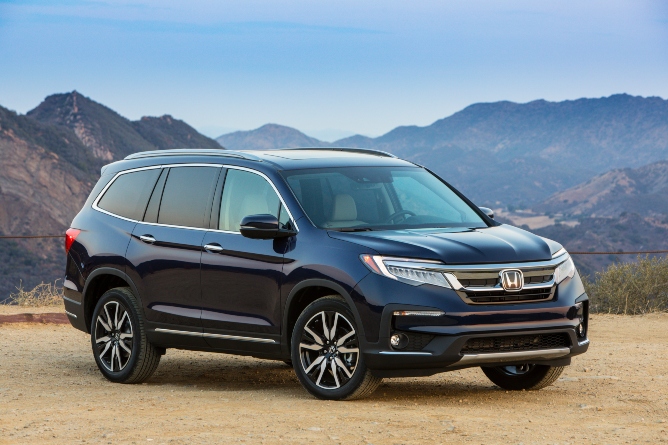 Soft touch plastics on the dashboard and quality materials offer a high-quality feel but not quite as in the realm of high-end luxury SUVs. 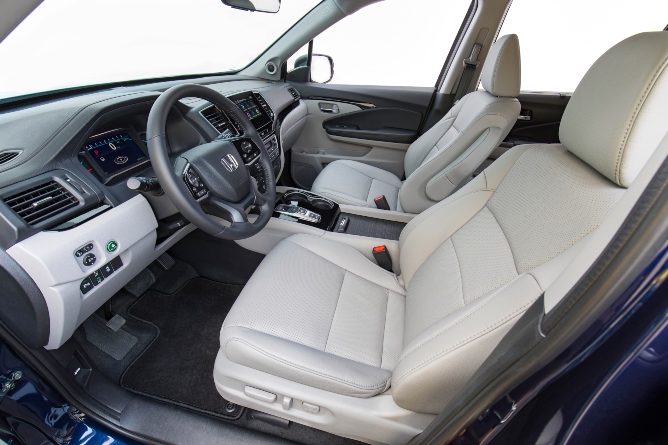 The controls are easy to reach and laid out ergonomically. The newly redesigned touchscreen on the Pilot has been received well and praised by online reviewers as a vast improvement over the previous models. A new steering wheel design also cleans up the layout of the controls, but drivers will mostly interact with the centrally mounted touchscreen and some physical controls for the climate control. 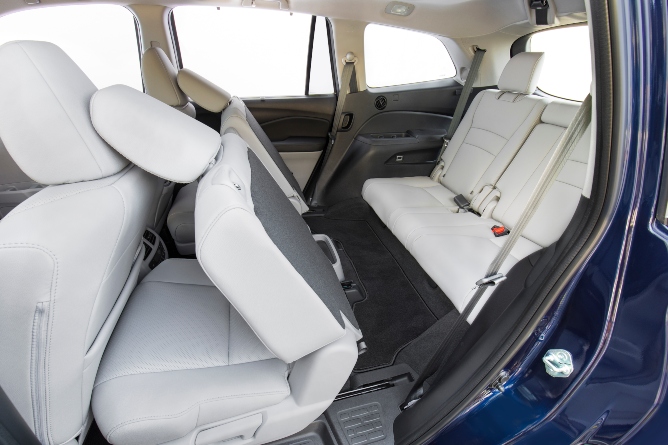 The second row offers plenty of space to install and remove car seats and the LATCH anchors are easily accessible.

The Pilot is definitely a utility vehicle. It has an adequate amount of cargo space despite trailing in this category in the mid-size segment. Honda utilizes space as much as possible by equipping the Pilot with plenty of door pockets, cup holders and a nice small item cargo space in the center console. 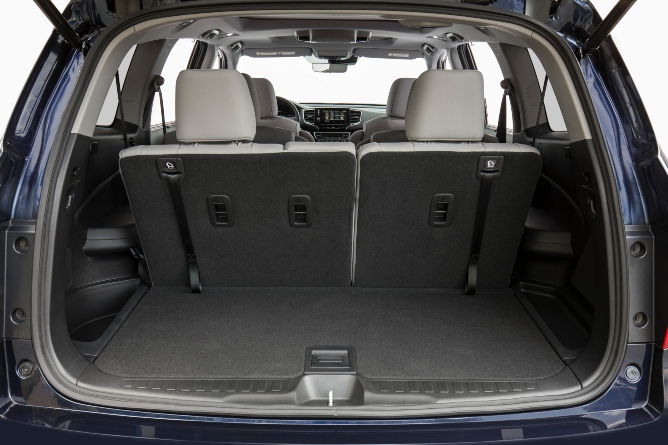 Newly added for 2019, the Pilot Touring and Pilot Elite get a hands-free, powered liftgate as standard equipment. A person can wave their foot under the rear bumper to open the tailgate as long as they have the key in their pocket or bag.

The base model front-wheel-drive Pilot LX trim is capable of towing 3,500 pounds. The all-wheel-drive equipped models are competitive with the majority of V6 three-row SUVs by towing up to 5,000 pounds. 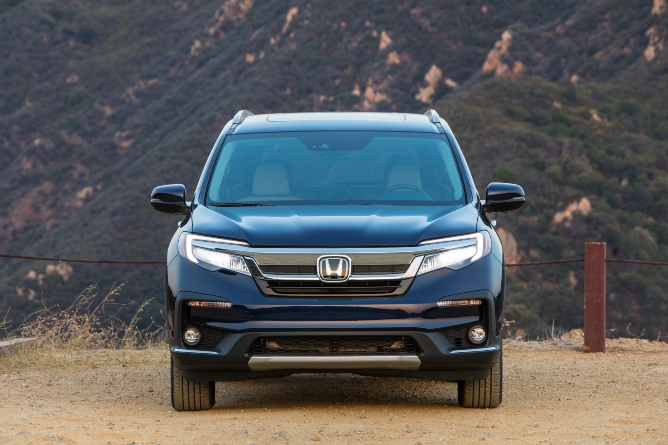 The Infotainment system on the base model Pilot LX is equipped with a 5-inch display, Bluetooth, two USB outlets, a seven-speaker audio system, and a multi-angle, rearview camera standard. 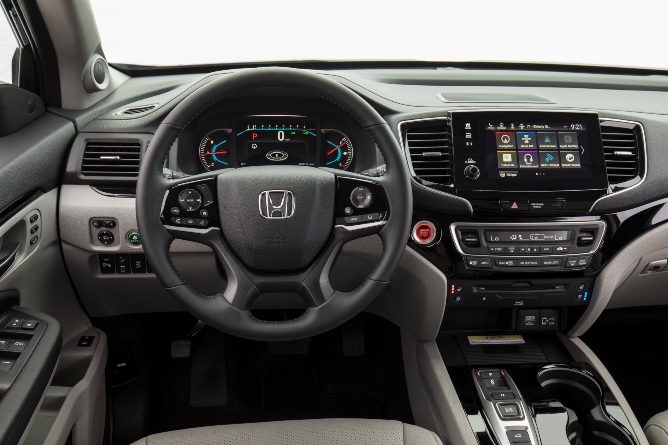 The Pilot Touring is equipped standard with navigation and the rear entertainment system, 10-speaker 590-watt premium audio system and mobile hotspot capability with a subscription.

For the 2019 model year, all Pilots are equipped all with Honda sensing, which consists of both active safety and advanced driver assistance technology features as standard. First is the collision avoidance braking system. The Pilot can detect if a possible collision is present and will initiate emergency braking if the crash appears unavoidable. Next is a road departure system that can detect lane changes without using the turn signal it can steer the vehicle back into the lane and apply the brakes if necessary. The third is Honda's version of adaptive cruise control which monitors the vehicle ahead and adjusts the speed accordingly while cruise control is active, this function only works at speeds over 20 mph which can result in needing to reset the cruise control after coming to complete stops in stop and go traffic. The last standard safety feature is a lane keeping assist feature which will adjust steering to keep the vehicle in the center of a detected lane all while the driver's hands never leave the steering wheel.

The Honda Pilot is available in only three different powertrain configurations. The base model Pilot LX is equipped with front-wheel-drive and a 3.5-liter V6 paired with a six-speed automatic transmission. The Pilot EX, EX-L and Touring all have the available option of pairing the V6 engine with an all-wheel-drive system and a nine-speed automatic transmission. On the Pilot Elite, the standard configuration is all-wheel drive paired with the nine-speed transmission.

The Pilot's V6 engine produces 280 horsepower and 262 lb.-ft. of torque. Power is described as abundant by reviewers but designed to conserve fuel. The Pilot is far from underpowered, yet will require extra effort at the accelerator to fully open the throttle. The once sluggish and awkward shifting on the previous model year Pilot's nine-speed transmission received heavy criticism, and Honda engineers have said they've addressed the concerns. The Pilot can sprint to 60 mph in about 7 seconds, shifting quickly and efficiently on its own or you can use the provided paddle shifters. The 7-second 0-to-60 time beats both the Subaru Ascent and the Volkswagen Atlas.

Steering on the Pilot is well-defined and above average for this class, the only critique among reviewers is the steering wheel lacks road feel. The handling is capable of changing lanes with ease and feels remarkably light on its feet compared to other three-row SUVs.

The interior cabin is quiet and does a great job of canceling tire and wind noise better than the majority of competitors in the class.

The Pilot has an all-wheel-drive system that when selected can adjust power delivery for different types of road conditions to improve handling and traction in snow, mud, and sand. Handling and steering are easy to maintain at significant speeds on off-road trails but lacks clearances and off-road assistance features such as hill descent.

As far as visibility is concerned the Pilot doesn't have any standout strengths or weaknesses, and visibility is average for this size SUV but could likely benefit with a 360-degree camera system rather than the multi-angle rear camera paired front and rear parking sensors.

Despite already having various hybrid, electric and alternative fuel vehicles Honda has not yet entered the ring with a crossover SUV competitor.

The Honda Pilot offers a solid, capable crossover SUV that provides value for the new car buyer seeking performance and capability without extra bells and whistles while still offering the must-have safety features which are becoming more common on late model vehicles.