Would we buy one? Yup!

The Touring and Elite models come with a 9-speed automatic transmission.

Named a 'Top Safety Pick Plus,' the 2017 Honda Pilot was awarded the Insurance Institute for Highway Safety's highest rating of 'Good' in five crash tests. The NHTSA rated the Honda Pilot five stars based on its frontal, side, and rollover crash tests.

Compared to its competitor, the Toyota Highlander, the Pilot has a lower starting price, better performance, and more passenger and cargo capacity. But the Toyota SUV has more standard safety features. Also, when compared the Pilot is compared to the Chevrolet Traverse, the Chevrolet SUV is the better value: it has excellent safety scores, more cargo space, excellent handling, and a lower price.

Across the board, reviewers recommend skipping the base-level LX and opting for other Pilot trims when searching for a Honda Pilot for sale. When paired with the Honda Sensing safety features, the Honda Pilot EX-L trim offers the best value.

All Pilot trims come with an infotainment system with a seven-speaker sound system that includes Bluetooth and a USB port with a one-touch start. The entertainment system lacks physical knobs making usability difficult, but the touchscreen has larger icons. Higher Pilot trims offer Android Auto, Apple CarPlay, satellite radio, navigation with voice recognition. The touchscreen is upgraded to an 8-inch at the EX and EX-L trims. The Honda Pilot Touring and the Honda Pilot Elite models provide a 10-speaker entertainment system.

The Pilot models offer up to five USB ports in the front and second-row as well as an HDMI port for rear entertainment. The navigation system includes live updates, and the Pilot has a SiriusXM ability to create a customized channel and weather reports.

The Honda Pilot has more cargo space than other 3-row seating SUVs. The cargo area measures 18.5 cubic feet with the third row in use and increases to 55.9 cubic feet. The second row and third row offer LATCH car-seat connectors, allowing four car seats to fit in the rear seats.

Second-row seating is a split-folding bench on the Honda Pilot LX. Higher trims provide captain's chairs that allow walk-through access to the third row and a set of cupholders. There are cupholders, a USB port, and a bin capable of holding a large smartphone in the front row.

A one-touch button on the higher Pilot trims folds the second-row seats and slides them forward. The rear headroom and legroom are roomier than expected. The Pilot rivals the Honda Odyssey minivan in interior space.

Similar to the Chevrolet and Toyota, the Pilot has a towing capability of 5,000 pounds with AWD. The FWD Pilot can tow up to 3,500 pounds.

Honda took cues from the Honda CR-V and added more practical details, like touchscreens that offer user-friendly icons. There are obvious style touches from the Honda Accord sedan in the interior, and the lineup provides well-finished materials. The Honda Pilot Touring trim offers a sunroof, as well as acoustic glass. The EX-L offers leather seats as well as a moonroof.

The Honda Pilot has lost its boxy shape from years past, with a lower front end and a rear end that hides the undercarriage, unlike the Chevrolet. The Pilot is 111.0 inches in its wheelbase and is 191 inches in length, a larger vehicle overall than previous generations.

The Pilot offers FWD as standard, and AWD is an option.

The V6 280-horsepower engine can be paired with a 6-speed or 9-speed automatic transmission. The Pilot has a towing capacity of up to 5,000 pounds that can be improved with a traction management system. The all-wheel-drive can turn too sharply while on test drives, making it seem out of place with the smooth ride. Front-wheel-drive offers a similar and smoother ride.

The Pilot's EPA-estimated fuel economy rating is 19 mpg city and 27 mpg highway, an average rating for SUVs in its class. Respectively, the Toyota Highlander offers 20/24 MPG city/highway while the Chevrolet Traverse provides only 15/22 mpg city/highway.

The Honda Pilot Touring and Elite trims with 9-speed automatic transmission and FWD are rated at 20/27 mpg city/highway. AWD models are EPA-rated at 19/26 MPG. 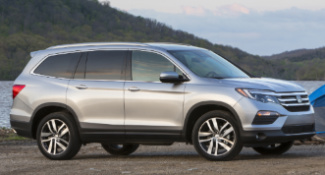 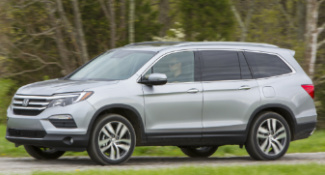 2017 Honda Pilot Review
Autolist Editorial | Oct 15, 2020
The 2017 Honda Pilot is a 3-row SUV with a well-finished interior. Explore the tech and safety features as well as available drivetrains of the Honda Pilot trim levels. More ...