The 2019 Honda Fit is a subcompact hatchback, with the current version introduced for 2015. The lone new feature for the 2019 model year Honda Fit is the addition of automatic high beam headlights.

The Fit is only available in a hatchback body style and competes with the Toyota Yaris, Hyundai Accent, Kia Rio, Chevrolet Spark, Kia Soul, Nissan Versa and Mitsubishi Mirage. It's notable compared to rivals that are only offered as a sedan, by coming only as a tall, five-door hatchback. The Fit uses this to its advantage, allowing it to be one of the most versatile vehicles that one can buy.

There are very few things the Fit doesn't do well. It is considered more engaging to drive than some of its more comfort-oriented competitors, it has copious amounts of cargo and storage capacity and fuel economy is at the top of the class.

The Fit has been providing its buyers with a healthy dose of reliability, practicality and affordability in an even more neat package than Honda's own Civic. For those who can do without the slightly extra amount of car the Civic can give, the Fit is perfect.

The Fit is small and wedge-like in its appearance. It resembles many of the minivans on the market today, but in a much more compact package. The gently sloping roofline does help it appear more car-like than some upright cars like the Kia Soul, but it is not as aggressively sloped as some of the sportiest-looking subcompacts, like the Toyota Yaris. 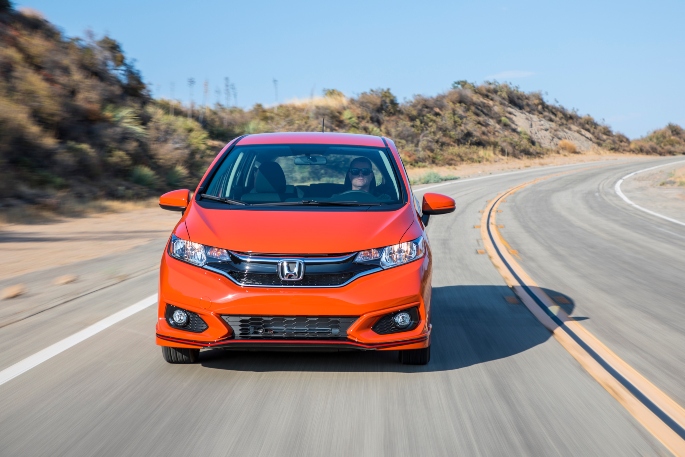 Small 15-inch steel wheels on the base LX model can make the Fit look somewhat disproportionate because of its tall doors and windows. The larger 16-inch alloy wheels suit the car much better and give it fuller, more appropriate dimensions.

The Fit's beltline gently rises as it progresses toward the rear of the vehicle, with the windows becoming narrower toward the rear hatch. A central character line follows this gradual incline and gives the Fit a dynamically pleasing side profile.

The rear end is short and stubby. The front end showcases Honda's conservative styling with the lack of both projector beam headlights and an oversized grille.

The Fit is also offered in Sport trim, which adds unique exterior trim pieces, black wheels, and a few subtle spoilers, although it does not gain any performance upgrades. Better-equipped EX and EX-L models are also offered. 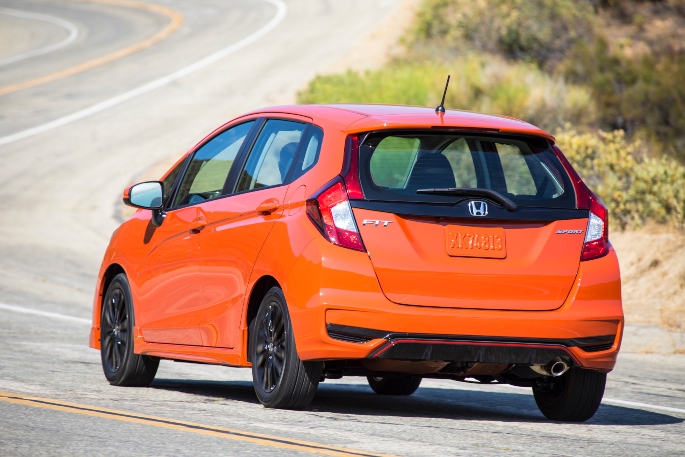 Reviewers universally praise interior comfort as being well-built and spacious for the class. Interior space is noted to be much larger than the outside appearance would suggest, and head and legroom is noted to be plentiful. 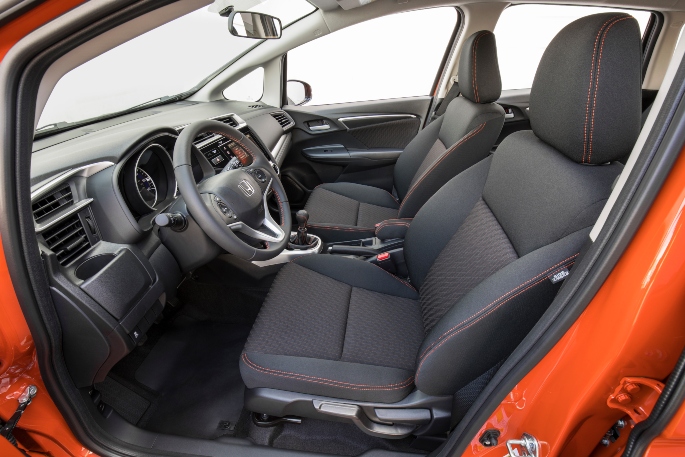 Interior quality is better than average for the class, but not overly plush, according to reviewers. The Fit shows it is an economy car, based on high priority being placed on sturdy materials rather than ones that convey a luxurious feel. Still, buyers who want a more upscale feel can find that in some rivals such as the Kia Soul.

Ride quality is surprisingly good for many reviewers, considering how small the Fit is.

Seats are noted to be comfortable and supportive, and getting in and out of both the front and rear seats is easy. The Fit's upright stance and tall cabin allow reviewers to slide in rather than fall into the cabin, unlike many other small cars.

Visibility is universally praised as being very good, with the driver's upright seating position contributing much its positive review. 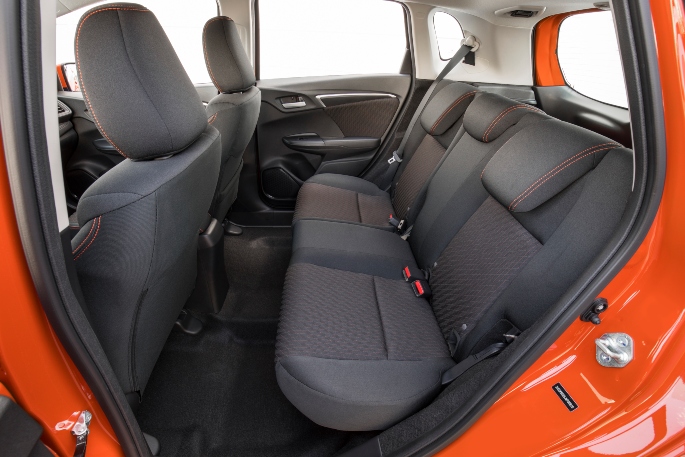 Some downsides that reviewers note are above normal road noise and tight rear headroom. Both of these are universally regarded as forgivable by reviewers given the Fit's price, but it could be one reason why some buyers may be convinced to spend a little more for a slightly larger vehicle, such as the Honda Civic Hatchback.

Utility and Practicality are both regarded as excellent, considering the Fit's small size.

Being a hatchback boosts the size of the Fit's cargo area. With the rear seats folded down, there is nearly 53 cubic feet of storage capacity. That leads the class and even compares well with some subcompact SUVs. With the seats in their normal position, there is 16.6 cubic feet of capacity, still more than many competitors. 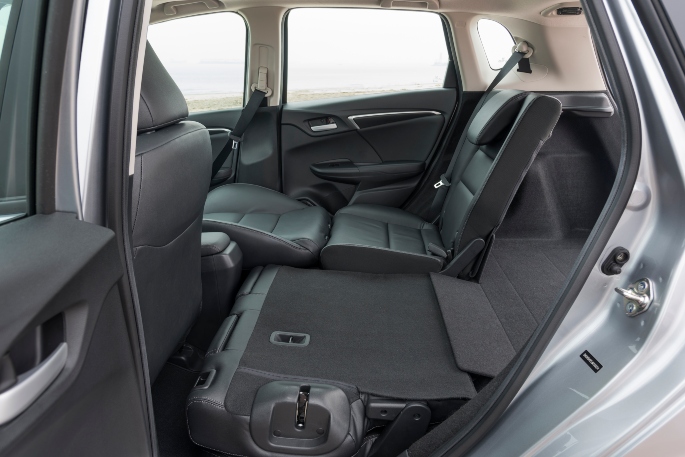 The utility of the Fit is further increased with the use of a fold-flat front passenger seat for long items and Honda's Magic Seat back seat system. It allows for various folding configurations, including a fold-flat, split second-row seat for a variety of cargo carrying options.

Door openings are large, allowing for easy access into all seating positions. The hatch opening is also noted to be sufficiently wide with a low liftover height. Small storage space is plentiful inside the cabin, with several cup holders, bottle holders, and storage compartments scattered throughout. 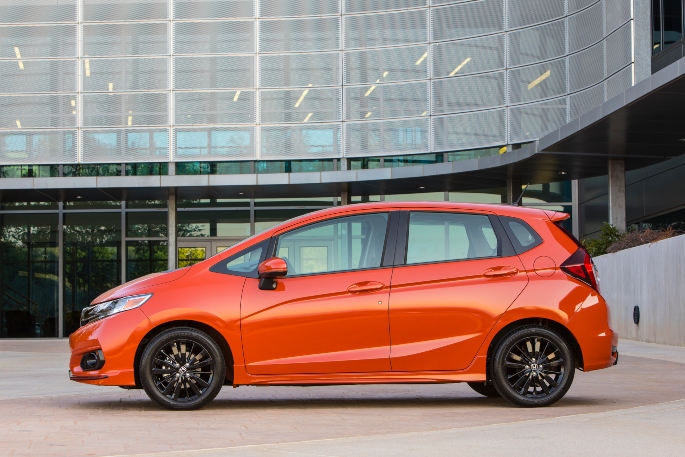 Ease of use for the climate controls is an added utility bonus for all testers. All note that the system is easily controlled and ergonomically pleasing for both the driver and passenger.

Technology and Infotainments systems offered on the Honda Fit are plentiful for the vehicle's price point.

Apple CarPlay and Android Auto capabilities are offered on all but the base trim level. The infotainment is presented via a 5-inch display on the base LX trim, while a 7-inch touchscreen display comes standard on all other trims. 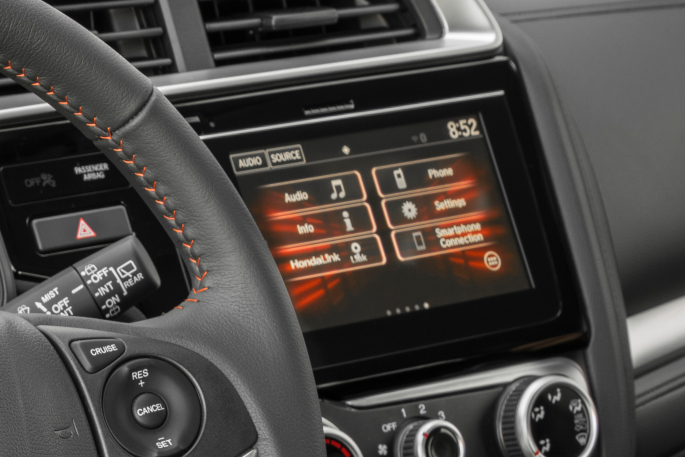 Standard technology features include Bluetooth, a rearview camera, a USB port, and a 4-speaker audio system.

HondaLink is Honda's smartphone app that allows its users to integrate the vehicle's infotainment system with a paired smartphone as well as control certain features of the Fit through the paired device.

But overall, the infotainment system isn't that easy to use or loaded with features, compared to some similarly priced rivals. Some changes were made for 2018 to improve its functionality, but the Fit won't please the most tech-savvy buyers in this segment.

The 2019 Honda Fit is a standout for its safety features and crash test ratings.

The National Highway Safety Transportation Administration awarded the Fit a five-star overall safety rating with the rollover resistance test being the lone four-star award. The Insurance Institute for Highway Safety awarded the Fit the highest honors in its safety tests when equipped with all available safety features.

The Honda Sensing safety system is available on all trim levels and includes lane departure warning, road departure mitigation, adaptive cruise control, lane keeping assist, and forward collision warning. LaneWatch is also available which uses a camera on the passenger side mirror to display the passenger side blind spot on the infotainment screen.

Most reviewers are pleasantly surprised by the composed driving experience provided by the Fit. It is noted to inspire confidence on the highway, despite its short wheelbase, and surprisingly agile on curvy roads.

The Honda Fit models are available with a single engine option, but choosing a manual transmission versus the continuously variable automatic provides slightly different power numbers.

Despite its notably engaging driving characteristics, the Fit is not quick. Testers note the 0-60 mph time is about 9 seconds, which is OK for the class. Hauling more than two people or heavy cargo takes its toll on the small engine, according to testers.

Reviewers note that the agility and playfulness of the Fit come courtesy of its good steering feel and firm suspension. Everyday driving is indicated to be easy, with a responsive accelerator and consistent brake feel.

The perfect combination of ride compliance, nimble handling, and the everyday ease of use make the Fit most reviewers' choices for the best overall driving experience in the class.

The Honda Fit achieves best in class fuel economy thanks to its continuously variable automatic transmission.

Only the Mitsubishi Mirage achieve better combined gas mileage numbers, but it's also a smaller and far less powerful vehicle than the Fit. The Toyota Yaris sedan and Nissan Versa come in just under the Honda Fit with a combined fuel economy of 34 miles per gallon to the Fit's 36 combined.

The Honda Fit provides one of the best overall car values in the market today. Even though its starting price point is generally slightly higher than that of its competition, its benefits far outweigh the shortcomings of most other competitors at a lower price point.

Quality, reliability, safety, and practicality all make a good showing, and all reviewers universally love the Fit compared to others in its class. The Fit can even compete with some larger vehicles outside of its class for interior cargo volume and overall practicality.

The Honda Civic is a larger vehicle, but the Fit has it beat for cargo space when the rear seats are folded down. It is also only five cubic feet short of its larger HR-V crossover, which is based on the Fit. If space is a priority, the Fit can be had at a lower price point than both of its relatives.

A downside to the Honda Fit is the rear headroom. Reviewers note that taller adults have to bend slightly or slouch to sit comfortably upright. Interior noise can also make longer highway trips tiring. The Fit's engine is also noted to be somewhat underwhelming in terms of power, but this is perfectly acceptable considering its class. Those who want more performance will most likely seek a different type of vehicle.

Despite these things, the Fit does provide a fun and playful driving experience, according to testers. Those looking for a good first car that is not boring to drive might consider the Fit. Additionally, it is one of the safest subcompact cars available on the market.

Finally, the Honda Fit achieves all of this while returning best in class fuel economy numbers.

The Honda Fit is available in four different trim options:

The 2019 Honda Fit LX comes standard with the 1.5-liter inline 4-cylinder engine and a six-speed manual transmission. It starts at $17,110 with destination fee included. Adding the automatic CVT transmission costs an additional $800.

Optional on the LX is Honda Sensing safety suite which comes standard with the upgrade to the automatic CVT transmission.

The Honda Fit Sport comes standard with six-speed manual transmission. It starts at $18,420 with destination fee included, and the automatic transmission is also available for $800.

The Fit EX comes standard with the six-speed manual transmission. It starts at just over $19,000. The CVT transmission is optional for an additional $800.

The Fit EX-L is the top-of-the-line model and starts at $21,440. It is the only trim to include a standard CVT automatic transmission without the option for the six-speed manual transmission.

Leather upholstery, heated side mirrors, and heated front seats are all standard on the EX-L trim with an optional navigation system.