The Honda CR-V is a compact SUV that competes with the Nissan Rogue, Toyota RAV-4, Mazda CX-5, and Subaru Forester. The CR-V is aimed at new car buyers that need extra cargo capacity and utility but don’t want a large vehicle.

The Honda CR-V is offered in four trims: LX, EX, EX-L, and Touring. Honda groups its options packages for the CR-V into trim levels, which makes choosing a vehicle with the right equipment much easier.

After having been redesigned in 2017, the CR-V rolls into 2019 relatively unchanged. A new White Pearl paint color was added to the lineup for this year, but all engine and trim choices remain. The CR-V has been at or near the top of many reviewers’ “must-buy” lists for years and continues its successful run for the new model year. Critics praise the Honda for its long list of tech equipment, strong fuel economy numbers, and generous cargo space. The CR-V also wins points for its smooth driving feel and modern styling.

The CR-V has been on sale in North America since 1997 and is now in its fifth generation. Originally produced in Japan, it has been made in various places across the United States and Canada since 2007. Until recently, the CR-V was Honda’s smallest SUV, sitting below the Pilot in the automaker’s lineup. Now, the CR-V is more of a middle child in the SUV lineup, larger than the HR-V and smaller than the Pilot and new Passport SUVs.

The latest CR-V shares a global design platform with the Honda Civic. Unlike the front-wheel drive compact sedan, the CR-V is offered with optional all-wheel drive. This design is credited with giving the CR-V car-like driving manners and a smooth ride, while also bringing the fuel-efficiency of a front-wheel drive biased platform.

The CR-V has been a sales success for Honda, with nearly 400,000 sold in 2018. It faces stiff competition from vehicles like the Toyota RAV4, which has been completely overhauled for 2019. Since its last major update took place for the 2017 model year, the CR-V will likely be at least partially refreshed for 2020.

The 2017 overhaul brought sharp modern styling to the CR-V, which included LED daytime running lights, and 18-inch alloy wheels for EX trim and higher. Compared with the vehicle before it, the latest generation CR-V has a longer hood with more aggressive front-end features, a shorter rear overhang, and more ground clearance. Honda also stretched the wheelbase by 1.6 inches, which improved interior space and ride quality. 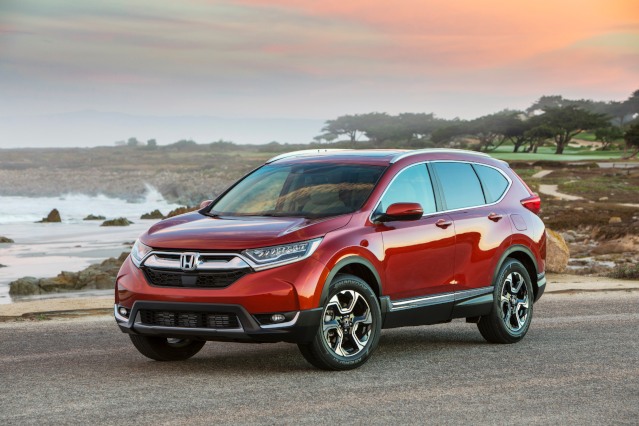 Honda’s exterior design choices also have impacts on fuel economy and driving dynamics. The CR-V is available with an active shutter grille system that can open and shut portions of the grille to improve aerodynamics. Other vehicles have this feature, particularly high-end models, but the CR-V is the first Honda vehicle with the technology. The A-pillars have also been slimmed down to improve outward visibility in front of the vehicle. Honda also designed the CR-V’s doors and rear hatch to be as large as possible for easier loading and unloading of people and cargo.

Reviewers give the new CR-V high marks in the styling department, noting that the muscular look and slightly longer proportions are upscale, clean, and attractive. Most exterior options are tied into trim level choices, but Honda does offer accessories for the CR-V that include roof rack crossbars, a bike attachment, door visors, body side molding, and special fender emblems. 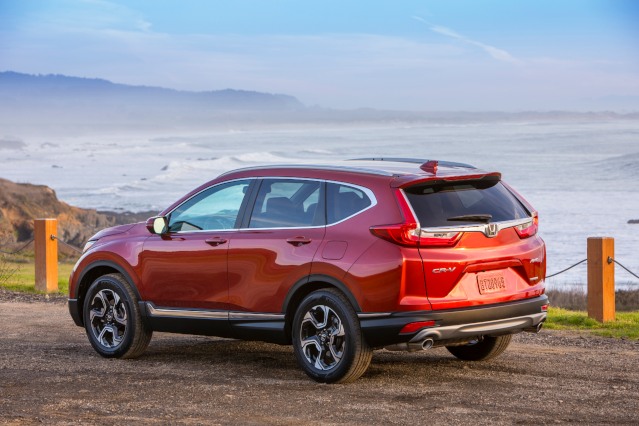 The CR-V is a two-row, five-passenger crossover and is one of the roomiest vehicles in its class. Critics note that the CR-V makes clever use of the space, with thoughtfully-placed storage areas.

The front seats are well-padded and easily adjustable to a wide variety of body shapes and sizes. Reviewers like that the driver’s seat and steering wheel adjustments make it easy to quickly find a comfortable driving position. From the front, outward visibility is very good, with very few obstructions and small blind spots. 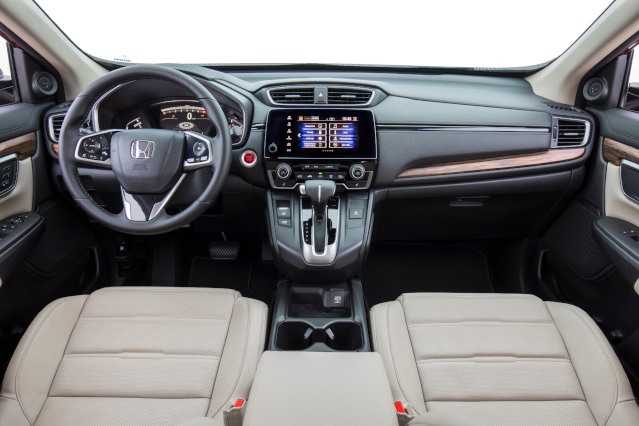 Both rows of seating in the CR-V are large and comfortable enough for adults to ride without issue. Taller drivers may find that their knees bump into the center console area, but elsewhere foot room is more than adequate. The CR-V’s gently sloping roofline helps increase head room for second row passengers.

CR-V LX and EX models come with cloth upholstery that is soft and comfortable, while EX-L and Touring trims come with leather upholstery. Reviewers note that even the base cloth material feels premium.

The 2019 CR-V wins high marks with reviewers for its well-constructed interior with clean styling touches. Though most options and features are wrapped into the various trim levels, there are a few standalone interior options available, like all-season floormats and cargo mats that protect the carpet from wet and muddy feet, illuminated door sill trim that lights up and protects the paint from scuffs, and rear seat covers.

The CR-V is considered to be one of the most practical vehicles on sale today. It has been designed for maximum utility and ease of use with features like a configurable center console with a deep storage area and a sliding tray inside. Reviewers like the CR-V’s large cupholders, deep door pockets and small-item storage.

The CR-V features over 39 cubic feet of rear storage space, placing it at the top of its class and close to a few much larger vehicles. With the rear seats folded down, the CR-V has over 75 cubic feet of cargo space, and the cargo floor is height-adjustable to allow for more space. Available accessories for the cargo area, include a cargo organizer, cargo tray, or cargo net. These options make the space even more usable and help keep smaller items from rolling around when driving.

The back seats have all been equipped with LATCH anchors, which means that a car seat can be installed in any position. Critics note that the large rear door openings allow for easy loading and unloading of children and makes it easier for people with limited mobility to enter and exit the vehicle. 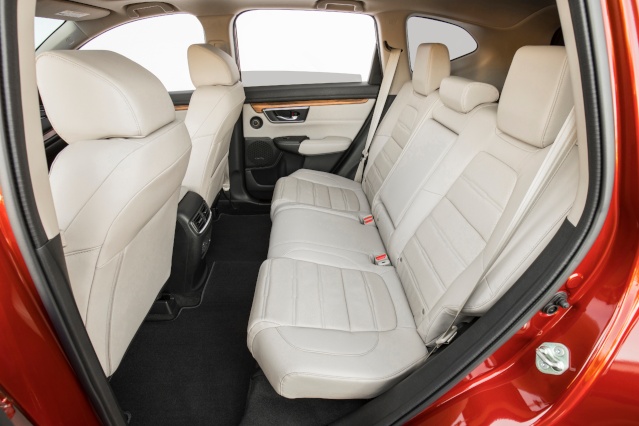 The CR-V can tow 1,500 pounds, which is enough for a small boat or trailer.

All but the base LX trim come with Apple CarPlay and Android Auto, which brings features like music and media, navigation, and hands-free texts/calls into the dash of the CR-V. All trims come with two USB ports up front and most trims have another two in the rear.

Honda made a controversial decision to remove the volume knob from some of its vehicles’ infotainment units, but the CR-V still has one – a feature many critics call out specifically. The user interface has also been noted as being slightly clunky and awkward to use, but Apple CarPlay and Android Auto make use much easier. The CR-V also has available voice commands, but reviewers recommend using the Apple or Android voice recognition, if available.

A five-inch LCD screen is standard for LX trim, along with a 160-watt audio system. This trim also comes with Bluetooth phone and audio connectivity, Pandora compatibility, and 12-volt outlets.

All other models get a seven-inch touchscreen. The CR-V EX comes with a 180-watt, six-speaker sound system and the EX-L gets eight speakers. The top two trims come with a 330-watt, nine-speaker system and subwoofer. EX and higher trims come with SiriusXM radio capabilities, SMS texting functions, and Apple CarPlay/Android Auto. Navigation is available for the top Touring trim only.

The CR-V is also available with a driver information interface. EX and higher trims have the ability to display audio settings, a trip computer, phone status, a digital speedometer, and a driver attention monitor within the gauge cluster.

The 2019 Honda CR-V is considered to be a safe vehicle. In IIHS crash tests, the CR-V scored “Good” marks for driver- and passenger-side impact protection, roof strength, and head restraints. When equipped with the available Honda Sensing tech that includes automatic emergency braking, the CR-V also scored a “Superior” rating for front crash prevention.

Headlights and child seat ease of use were both graded as “Acceptable”. These results are good enough for the CR-V to receive a Top Safety Pick rating from the IIHS.
The NHTSA has not yet rated the 2019 CR-V.

The CR-V is available with the latest in advanced safety technologies. Starting with the EX trim, the CR-V comes with Honda Sensing technology, which includes a collision mitigation emergency braking system that applies the brakes when the vehicle senses that a collision is unavoidable and a road departure mitigation system that can help steer the CR-V back into its lane if it detects that the vehicle is drifting across lines on the road. Other features include adaptive cruise control and lane keep assist, which helps center the CR-V in its lane. All models also have a rearview camera, with EX and higher trims getting dynamic gridlines that move with the vehicle.

When equipped with the 1.5-liter engine, the CR-V has been praised for its acceleration and fuel economy. Critics note that while most SUVs struggle with smaller engines, the turbocharged four-cylinder in the CR-V provides plenty of low-end power for city driving and is capable of easily reaching highway speeds for merging and passing.

Reviewers like the CR-V’s transmission, noting that the CVT behaves more naturally in the Honda than in other vehicles. Full-throttle acceleration can cause the engine to wail, though, which is a common trait of vehicles with CVTs.

Ride quality is excellent and thought it isn’t a sports car, critics like that the CR-V can handle itself competently on curvy roads. The suspension soaks up all but the worst bumps and body roll is minimal.

The CR-V is not designed to be an off-road vehicle, but models equipped withall-wheel drive have 8.2 inches of ground clearance. This makes the vehicle more capable in deep snow and on muddy or rutted surfaces.

The CR-V is considered to be a very fuel-efficient crossover, even though a hybrid model is not offered. Others in the class, like the Toyota RAV4 and the upcoming 2020 Ford Escape are (or will be) available with hybrid drivetrains that increase their fuel economy, but the CR-V is still competitive – especially with the 1.5-liter engine.

When equipped with the 2.4-liter engine and front-wheel drive, the CR-V has EPA-estimated fuel economy ratings of 26/32/28 mpg city/highway/combined. With all-wheel drive, those numbers change to 25/31/27 mpg.

The CR-V is consistently rated as one of the best, most value-packed vehicles on the market. Critics praise it for being well-equipped in any trim level, and while the base LX trim is considered a good value, most reviewers recommend buying the EX trim, which is one step up. This model includes upgrades over the LX trim that include heated seats, a power moonroof, and advanced safety features.

The CR-V EX-L has an MSRP that starts at $30,795 including the $1,045 destination fee and comes with leather upholstery, a power tailgate, a power-adjustable passenger’s seat, an auto-dimming rearview mirror, memory driver’s seat, and an upgraded eight-speaker sound system.

The CR-V Touring has an MSRP that starts at $33,795 including the $1,045 destination charge and comes with automatic LED headlights, a hands-free power tailgate, rain sensing windshield wipers, navigation, roof rails, an upgraded nine-speaker sound system, and dual chrome exhaust tips.