The 2019 Honda Civic is a compact car that is available as a coupe, hatchback, or sedan, and is one of the longest-running vehicles in Honda’s lineup. The 2019 Civic Coupe and Civic Sedan are offered in five trims: LX, Sport, EX, EX-L, and Touring. Hatchback models are also available in Sport Touring trim. There are two stand-alone sportier models: the Civic Si and Civic Type-R. The Civic is aimed at young people and families that want a budget-friendly and economical car with sporty styling and generous standard features. It competes with cars like the Toyota Corolla, Hyundai Elantra, and Volkswagen Jetta.

Now in its tenth generation, the Civic has been updated for 2019 to include trim level changes, new technologies, and new standard features. There is a new Sport trim level that slots between the LX and EX trims, standard Honda Sensing advanced safety technology, a restyled front end, and a new 7-inch infotainment system for most trims that includes Apple CarPlay and Android Auto.

Even though it is aimed at a mostly younger, more budget-conscious new car buyer, the Civic is available in two high-performance models. The Civic Si, which is more of a middle step toward high-performance, comes with a 205-horsepower engine and sport-themed trim all around. The car has been widely praised as a great value, offering a level of performance and fun that is generally reserved for cars costing much more.

The Civic Type R is the fastest front-wheel drive car ever made, and has set records for its acceleration and lap times at famous race tracks around the world. The car has a 306-horsepower version of the four-cylinder engines found in other Civic models and comes with sport-tuned suspension, a louder and higher-performance exhaust, comfortable sport seats and an aggressive aerodynamics package. Both the Civic Si and Civic Type R are offered with a manual transmission only. The Civic Si can be purchased as a coupe or a sedan, but the Type R is available only as a five-door hatchback. Because of its large rear space, the car is also very practical. 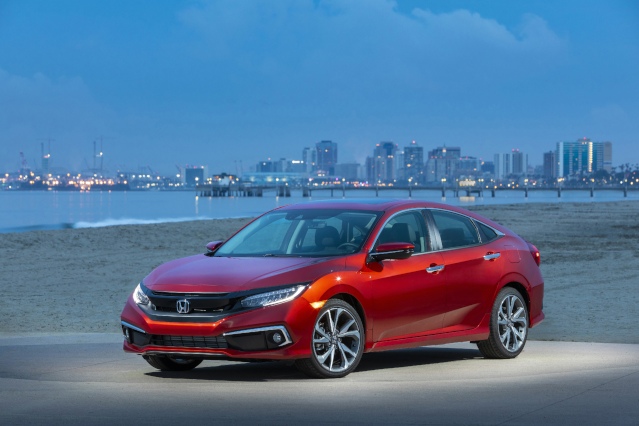 The Civic’s exterior has been updated for 2019 to include a more aggressive and sportier front end. The lower bumper is designed to give the Civic a wider look and the headlights have been blacked out. Both the Sedan and Coupe have a new grille look that is blacked out and glossy.

The Touring trim receives a new LED headlight design that is designed to give them wider and longer beams, and the trim level also sees updated chrome accents on the front and rear bumpers.

The 2019 Civic Si has been updated with a new Tonic Yellow Pearl color.
The Civic Type R has been noted by some critics as having busy, polarizing styling, and the exterior appearance of this trim has not changed for 2019. Many others find the Type R’s styling to be fitting of its performance level and of its target audience: younger performance-seeking car buyers. Notably, the Type R is a five-door hatchback design, which sets it apart from most of the rest of the Civic lineup. 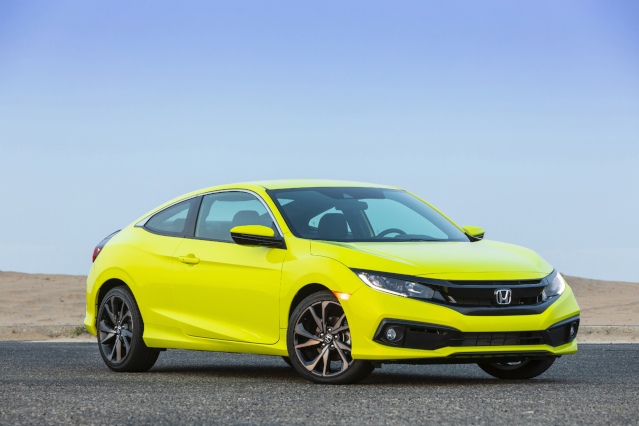 Much like the exterior, the Civic’s cabin has been gently updated for the 2019 model year. The steering wheel has been redesigned to be more intuitive, cupholders been made larger, and dash trim pieces are new for all trims. Honda says that the Civic now has more sound insulation in the floor, trunk and the fenders. 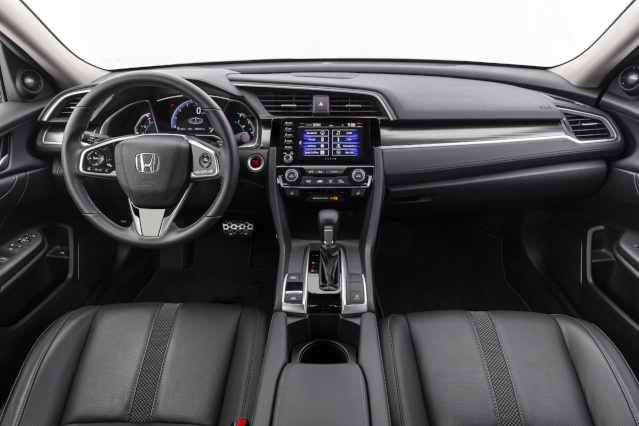 The latest generation Civic, last fully updated for the 2016 model year, has been praised for incorporating many of the larger Honda Accord’s premium features into a smaller and less expensive package. Critics note that the front seats are firm, supportive, but comfortable for longer rides.

Even as a compact sedan or coupe, the Civic’s back seat remains usable by adults, though many will find a harder time entering and exiting the coupe’s rear seat. The rear seat’s usable space is also very good, making it easier to load and unload a car seat.

Controls are well thought out and intuitive and all are easily accessible by the driver. Being a somewhat budget-oriented car, the Civic’s interior is constructed well, even if there is quite a bit of hard plastic throughout. Higher trims are equipped with soft-touch materials that lend the Civic a more premium feel.

Both performance versions of the Civic, the Si and Type R, have earned high praise for their very sporty but very comfortable interiors and rides. Critics say that the seats in both are well-suited to spirited driving, even on a track, but remain comfortable for long drives and work well for a wide variety of body types.

The Honda Civic’s cargo space and usable storage areas make it one of the best cars in its class. The trunk has 15.1 cubic feet of space and the tall storage area makes carrying larger items like golf bags or suitcases much easier. The rear seats fold down to accommodate long cargo that won’t fit in the trunk alone, but do not fold completely flat. This is especially true in Honda Civic Sedans, where rear space is more generous.

The Civic Hatchback earns good reviews for its rear cargo area, which is large enough for most bags and other items. The seats also fold in this configuration to allow for longer item storage. 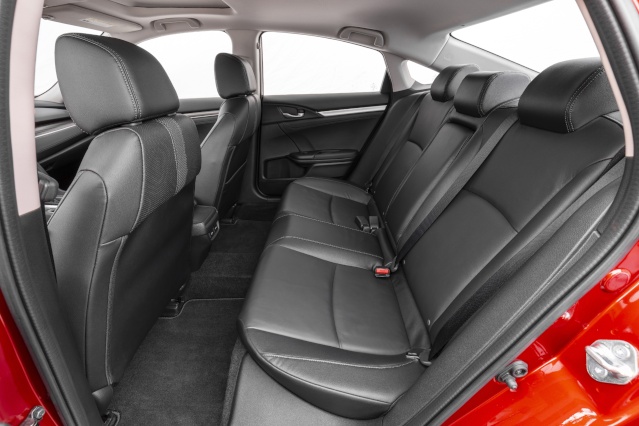 The Civic’s interior has been equipped with small storage areas in each door, large enough to hold a water bottle and other small items. The center console storage area is segmented into a large bottom cubby and a smaller tray on top, which accommodates items of all sizes with ease. There’s a cord pass-through for cellphone charging as well. Cupholders in both the front and back seats have been praised by critics for their ability to hold very large drinks.

Honda’s infotainment systems have been panned by critics for their lack of volume knobs, which made adjustments very difficult. The knob has been added back for the 2019 model year on all trims, and the infotainment unit itself has been updated for higher trims to include Apple CarPlay and Android Auto. All Civic trims also receive a new 7-inch digital TFT display in the instrument cluster. All models also come with USB ports and Bluetooth connectivity.

The Civic is available with a premium audio system, but even the entry-level sound system found in the LX model benefits from strong sound insulation and a well-designed interior speaker layout.

Both the Civic Sedan and Civic Coupe have been rated as “Good” in most categories by the IIHS. This includes front/side/rear impact testing, roof strength, head restraints, and seats. Front crash prevention is rated as superior. The Civic’s headlights were rated as poor.

The Civic Sedan and Civic Coupe also scored a five-star crash test rating with the NHTSA.

The base two trim levels, LX and Sport, come with a 2.0-liter i-VTEC engine that has 158 horsepower and 138 pound-feet of torque. These models are available with a six-speed manual transmission or a continuously variable transmission (CVT). This engine, while larger than the optional powerplant, produces less power and torque. Even so, it has been praised as being responsive and peppy, with plenty of power for most drivers’ needs.

Honda Civic EX, EX-L, and Touring trims come with a turbocharged 1.5-liter four-cylinder engine that has 174 horsepower and 162 pound-feet of torque. These cars only come with the CVT transmission. Civics equipped with this engine are noted as having strong acceleration and ample low-end power from the turbocharger. With this engine, the Civic has a 0-60 mph time of under seven seconds. Under heavy acceleration, the CVT shifts hard, but is otherwise very smooth.

All Civics are noted as having a smooth and refined ride that is controlled under most circumstances. Braking distance is better than average for the segment and steering feel is precise with a natural feel. Most reviewers have positive impressions of the standard Civic’s driving manners, especially as it compares to other vehicles in the segment.

The Honda Civic Si is a sport-tuned version of the car that is offered in both Coupe and Sedan configurations. The car’s up-tuned 205-horsepower engine is paired to a six-speed manual transmission only and the car has a limited slip differential that greatly increases traction under heavy acceleration and when cornering. The Civic Si has made multiple Top-10 lists for its engaging ride and handling that doesn’t detract from the car’s underlying practicality. The car is rated to run 0-60mph in 6.3 seconds, which combines with its low weight to make for a fun driving experience.

The Civic Type-R takes performance a step further and has also made critics’ Top-10 lists for its speed and agility. The 306-horsepower turbocharged four-cylinder engine and six-speed manual transmissions combine to make the Civic Type-R one of the fastest front-wheel drive cars ever made. Last year, it set the record for the class at the Nurburgring with a blistering time of 7 minutes, 43.8 seconds. The car has earned acclaim, not only because of its power and speed, but for its ability to deliver that speed with minimal turbo lag (how fast the turbo helps deliver power), its sharp handling and comfortable ride. The Type R also uses engineering tricks to reduce the amount of torque steer that the car produces under heavy acceleration, which in front-wheel drive cars is caused when the vehicle’s power causes the drive wheels to move to one side or the other.

The Civic, in all forms, is considered to be a very fuel-efficient car. When equipped with the 2.0-liter engine and manual transmission, the Civic has EPA-estimated fuel economy ratings of 25/36/29 for city/highway/combined mpg. With the CVT transmission, those numbers change to 30/38/33 mpg.

The Civic, because of its strong performance, variety of available body styles, and well-packaged options, is considered to be a good value.

Civic Sport models have a starting price of $22,345 for the Coupe with manual transmission. This trim comes with a 7-inch display that has Apple CarPlay/Android Auto, fog lights, a gloss-black spoiler, keyless start, a leather-wrapped steering wheel and shift knob, and a 180-watt stereo.

The Civic Touring Sedan has a starting price of $28,195 including an $895 destination charge and comes with automatic LED headlights, sport pedals, heated rear seats, a power passenger seat, and a 450-watt premium stereo with a subwoofer.

The Civic Si has a starting price of $25,195 including the $895 destination charge and comes with sport seats, a power moonroof, center-exit exhaust, a wing spoiler, manual seat adjustments, and heated seats.

The Civic Type-R has a starting price of $36,620 including a $920 and includes adaptive dampers, front sport seats, sport exhaust, and an up-tuned 306-horsepower engine.

The Civic Si and Civic Type R have been consistently praised for providing an extremely good performance and fun to cost ratio. Critics love the fact that they are powerful cars priced closely to their more pedestrian counterparts. Both high-performance versions of the Civic have made multiple buyer’s choice and critic’s choice lists because of this, and both cars offer performance on par with vehicles costing many thousands of dollars more.