The 2020 Honda Accord is a midsize sedan last redesigned for 2018. It represents the latest in a long-standing line of one of the most popular vehicles in the country.

This iteration, however, adds more fuel-efficient options, as well as an emphasis on styling and available technology, including a comprehensive package of driver assistance features to enhance safety.

Changes for 2020 are limited to a new-style driver’s front airbag designed to catch the occupant’s head better, while hybrid models get an audible alert system to warn pedestrians better that the vehicle is near when it’s in silent electric-only operation. 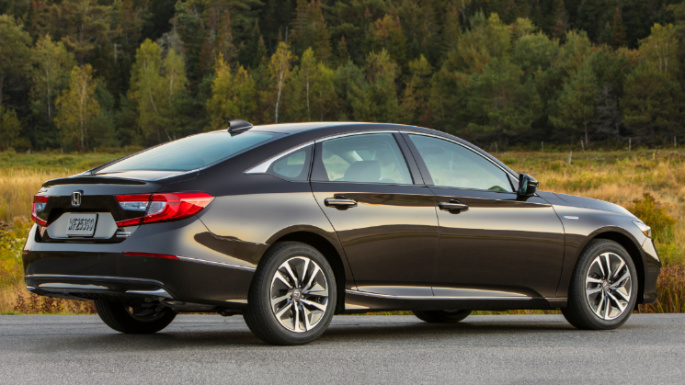 TL;DR Less conservative than Accords before, if not exactly a style leader.

The 2020 Accord has a more striking design than its predecessors, with a more sloping roofline and aggressive front end – even if it’s still a relatively conservative car in a mostly conservative class.

Carrying a grille similar to many of Honda’s current products, the Accord tries for a bold first impression with lots of black plastic and big strips of chrome. The top Touring model also features headlights meant to look like jewels, also evocative of some Acura-branded vehicles.

But the most significant departure for the current Accord has been the steeply raked roofline that tries to ape something like an Audi A7 or the Hyundai Sonata. It’s described as “coupe-like,” but most will recognize it as sleeker than the more upright Accords of the past. It’s less upright than something like a Subaru Legacy or Volkswagen Passat, too.

Still, the Accord’s practical core isn’t completely hidden by the more dramatic exterior shape. The Mazda 6 is likely the style leader of the class with its better detailing and use of materials. The 2020 Hyundai Sonata may polarize some, but it uses lighting and aggressive curves to at least create a uniformly bold statement.

TL;DR Relatively high-quality materials give the Accord an upscale feel.

In a world of more complicated interiors, the Accord brings some much needed common sense to the field. 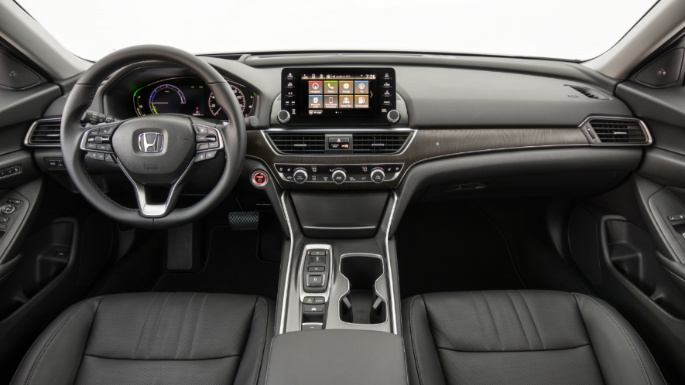 The Honda Accord has historically featured a no-nonsense interior. It has more physical controls than pretty much any new model Honda offers today, with basics for audio and climate functions covered for smooth operation. As a bonus, though, these controls have a relatively high-quality feel.

The whole interior mostly consists of nice materials despite the variety of plastics everywhere.

Among midsize sedans, the Accord is among the best. Some may be swayed by the more stylish designs found in the Hyundai Sonata or Toyota Camry, or the Subaru Legacy’s available Tesla-style touchscreen. 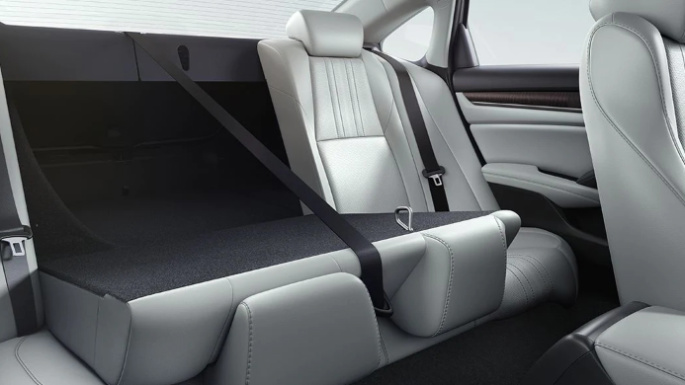 The only one to truly rival the Accord’s material quality is the Mazda 6. Still, high-level versions of both cars also hold their own against entry-level luxury cars costing thousands more.

The Honda Accord’s styling may give it a look of generous length, but the fact it is quite long also contributes to that. Midsize sedans have grown so much in recent years that they’re where full-size sedans were 20 years ago. However, it yields lots of space in the passenger area and trunk, especially for those in the rear. 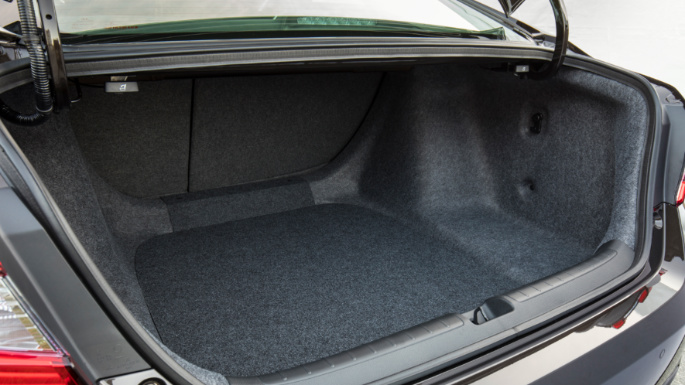 Rear passengers, especially, will find both front and rear seats accommodating. The Accord’s back seat has more space than numerous competitors, including the Ford Fusion, Hyundai Sonata, and Nissan Altima, and is pretty much ample enough for five passengers. Only the cavernous Toyota Camry offers more limousine-like space in the rear. A caveat, however, is that the Accord’s sloping roof makes it easier for taller people to hit their heads when getting in and out, according to reviewers. The squarer-shaped Passat and Subaru Legacy are better in this regard.

The Accord’s trunk has 16.7 cubic feet of cargo space. All but the base LX model have a 60/40 split-folding rear seat.

All Accords are front-wheel-drive, without an all-wheel-drive option found on the rivaling Ford Fusion, Nissan Altima, Subaru Legacy, and Toyota Camry. That may be a deterrent for those living where roads are often wet or icy or are coming from an SUV or premium sedan with that feature.

TL;DR Mostly keeps up with the times, but not every model gets increasingly common tech.

The simplicity of the Accord doesn’t mean it lacks in the technology department, even if the execution could be better.

All 2020 Accords come with some kind of touchscreen-driven infotainment system and the necessary Bluetooth connectivity, as well as a push-button start. 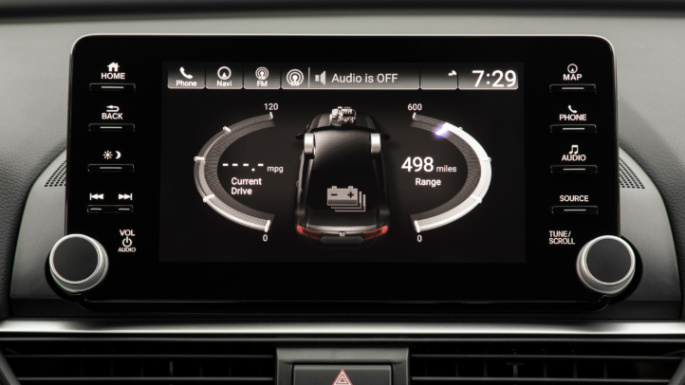 The base LX, however, are the only ones with things such as keyless entry, which seems stingy in 2020. LX and base Hybrid models do not come with Apple CarPlay or Android Auto capability, so you’ll have to step up to at least a Sport model that swaps the standard seven-inch touchscreen for an eight-inch model. Built-in navigation is only available on the top Touring level, where it’s also the only place to find a wi-fi hotspot.

That eight-inch touchscreen, too, is Honda’s latest design and incorporates more hard keys than previous systems, which were derided for overreliance on touch-sensitive controls that were too slow to respond. And the whole system was slow to respond. The Accord’s generally works better and allows you to move icons on the home page around so you can tailor the system a bit.

But even then, the graphics and maps aren’t as slick as those found on a Chevrolet Malibu or Ford Fusion, both of which also offer wi-fi on more models. And the Accord doesn’t offer a party trick like self-parking or the remote parking system found on the 2020 Hyundai Sonata. 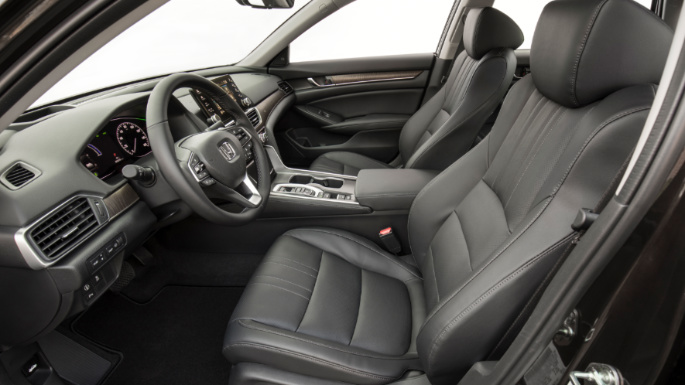 Excellent protection in a crash is critical, but the ability to avoid a crash altogether is even more. The Honda Accord comes equipped with numerous driver assistance systems to mitigate or prevent collisions, going further than many in this segment.

All 2020 Accords come standard with the Honda Sensing suite of technologies. These include automatic emergency braking with forward-collision warning, adaptive cruise control, lane-keeping assistance and warning, and automatic high beam control. It’s unfortunate, though, that a blind-spot monitor is only available on EX and higher models when some rivals are making it standard across the lineup.

The Insurance Institute for Highway Safety (IIHS) gave the 2020 Honda Accord its Top Safety Pick award, its second-highest rating. While the Accord scored highly on all marks, including crash prevention, the full LED headlights standard on Touring models scored worse than those found on every other Accord model. 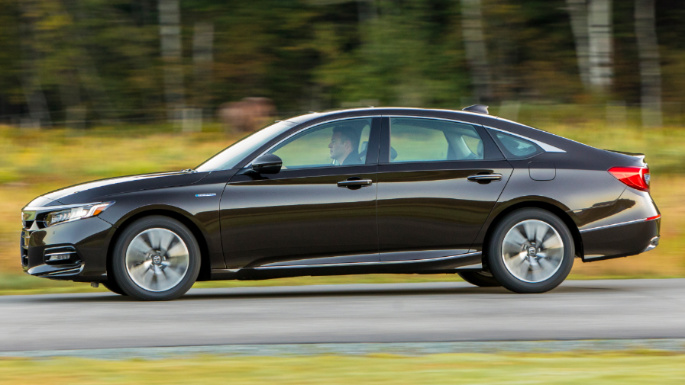 TL;DR The Accord is more polished than most in this class.

Along with its simplicity and wholesomeness, the Accord has a history of being one of the more entertaining family sedans to drive. That holds with the 2020 model, and a variety of engine and transmission configurations helps.

The base engine for the Accord is a 1.5-liter turbocharged four-cylinder engine with 192 horsepower and 192 lb-ft of torque, mated to a continuously variable transmission (CVT).

A 2.0-liter turbocharged four-cylinder with 252 horsepower and 273 lb-ft of torque is available on Sport, EX, and EX-L models and standard on the top-level Touring. It gets a 10-speed automatic transmission. Sport models can be equipped with a six-speed manual as a no-cost option.

The Accord Hybrid is equipped with a 2.0-liter four-cylinder engine mated to an electric motor for a combined power rating of 212 horsepower.

Most will find the 1.5-liter sufficient for everyday use, according to reviewers. Still, the 2.0-liter turbo offers noticeably more power for passing and exploiting the relatively taut handling for such a large sedan. Enthusiasts should be relieved that the Accord is one of the few new vehicles available with a manual transmission, a rarity especially in a car this large.

The ride is mostly compliant, but the Sport models with their 19-inch wheels are firmer and also cause more road noise. But vibrations and bumps are mostly well-suppressed and among the best in class. 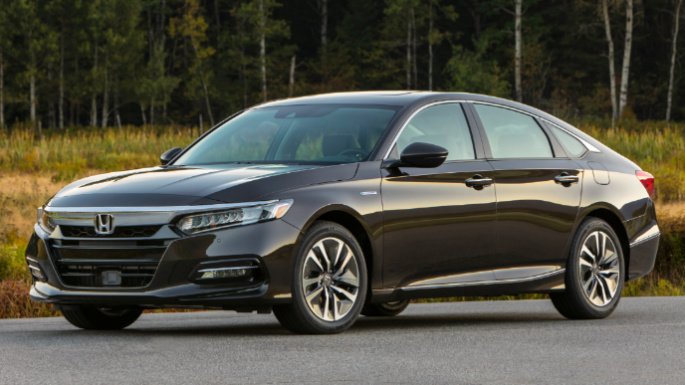 The Honda Accord with the 1.5-liter engine and CVT is rated by the Environmental Protection Agency at 30 mpg city, 38 highway, with a combined rating of 33 mpg.

Accord Sport models with the automatic transmission are rated at 29 city, 35 highway and 31 combined. That falls to 26/35/30 when equipped with the manual transmission.

All Accord Hybrid models are rated at 48 city, 47 highway, and 48 combined.

One version of the Toyota Camry with its four-cylinder engine is rated at up to 41 mpg on the highway and beats the Accord 1.5T’s combined rating by one mpg.

As far as hybrid midsize sedans go, the Accord Hybrid is bested by the Toyota Camry Hybrid LE and Hyundai Sonata Blue by four mpg on the combined rating. Still, the Honda is on par with more common versions of both of those rival sedans. The Accord also gets a far better combined rating than the Ford Fusion Hybrid’s 42 mpg.

TL;DR Aggressively priced among key rivals, but some typical options are only available on higher trims.

The Accord is available in six trim levels with a choice of three powertrains. Not all engines are available on each trim.

The Accord LX costs $24,975 MSRP, including the $955 destination charge. It comes with the 1.5-liter turbocharged four-cylinder engine with 192 horsepower and continuously variable transmission.

The Accord Hybrid costs $26,575 MSRP. It’s powered by a 2.0-liter four-cylinder engine with an electric motor for a combined output of 212 horsepower.

The Accord Sport starts from $27,785 MSRP. It comes standard with the 1.5-liter turbo and CVT, but the 2.0-liter turbocharged four-cylinder with 252 horsepower and 10-speed automatic is available for an additional $4,530. A six-speed manual is available for either engine at no cost.

The Accord Touring is the top-tier model. It costs $37,205 and can be had with either the 2.0-liter turbo or the hybrid system.

There is a lot of value in the Accord for the money, or at any price. Touring models are arguably better than cars costing thousands more, while a base LX is more accomplished than some compact cars that are the same price.

There are also numerous engine choices, from the performance-oriented to the efficiency conscious. The trim levels go from mainstream to borderline luxurious. And there’s generous room for people and cargo. Sure, the execution of the technology could be better, and some rivals have a sleeker look, but none of those quibbles should be enough to knock the Accord off of a shopping list. It’s also good value for money.

Where the Accord trips up on the value front because some features are restricted to more expensive trim levels, for example, you need a $29,000 EX model to get blind-spot monitoring when it’s standard on every Volkswagen Passat and most Nissan Altimas. But for the most part, all Accord models are generously equipped.

The Honda Accord should be on the shortlist for any new car buyer looking for a blend of space, efficiency, and performance.