The 2019 Volkswagen Beetle is a two-door hatchback and convertible. Built in Mexico, it most directly competes with the Fiat 500 and Mini Hardtop 2-Door. All three are small vehicles that use looks inspired by classic predecessors to sell their subcompact, more modern packages.

To some extent, the Beetle also competes with other subcompact cars such as the Honda Fit, Kia Rio, Chevrolet Sonic, Chevrolet Spark and Toyota Yaris, but all of these vehicles come as four-door hatchbacks and don't have the VW's heritage.

New for the 2019 model year is the Final Edition SE and SEL trims, as this is the last year for the Beetle. The previous Dune and Coast special editions are gone. All Beetle models receive standard blind spot monitoring and rear cross-traffic alert, and the base S version now gets body-colored mirrors, door handles and lower exterior trim.

The Volkswagen "New" Beetle was introduced in 1997 as a modern take on one of the best-selling vehicles in the world and the company's most iconic car. Redesigned and renamed simply "Beetle" for 2012, VW's retro model has changed little since then. Special editions, new engines and equipment changes have been most of the alterations over the last few years.

The Beetle, along with the Mini Cooper and Fiat 500, focus more on their throwback designs than practicality. Those looking for a more practical VW hatchback should look at the Golf, while the Jetta sedan is similarly priced and offers much more space than either of those cars. The Honda Fit is noticeably larger and comes with four doors, while the Chevrolet Spark is significantly less expensive.

Though not as practical as many other subcompact cars, the VW Beetle still provides its buyers with charm and eye-catching design in today's market.

The Beetle has an unmistakable exterior which mimics the original "Bug." 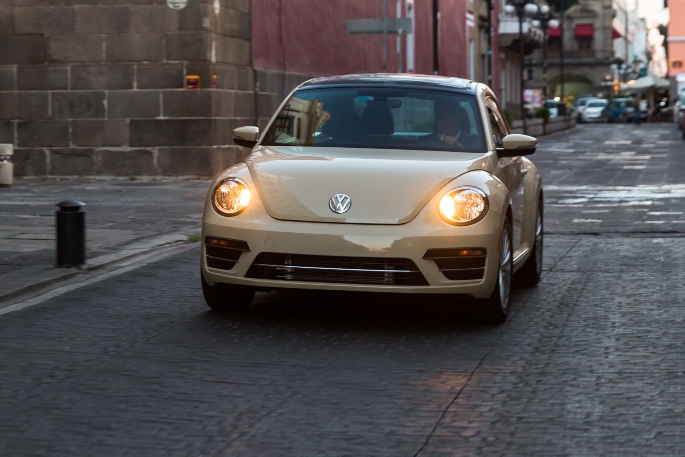 The 2012 redesign gave the current third-generation Beetle its slightly more aggressive design, as exaggerated curves gave way to flatter surfaces and a lower, more serious roofline. But the unmistakable round headlights were retained, and the Beetle is still clearly the spiritual ancestor of the vehicle made famous in the 1960s and '70s.

The Beetle has a short hood which tapers sharply at the front, lacks an oversized grille, and has large front fenders which give it a low and stable stance. The entire rear of the vehicle mimics the front with the same flared fenders. The roofline transitions into the rear hatch all the down to the rear bumper, creating a near perfectly rounded form and showing exactly how the car received its name. The side of the car lacks any character lines, just like its predecessors. Overall, the Beetle's shape is iconic and relatively simple. 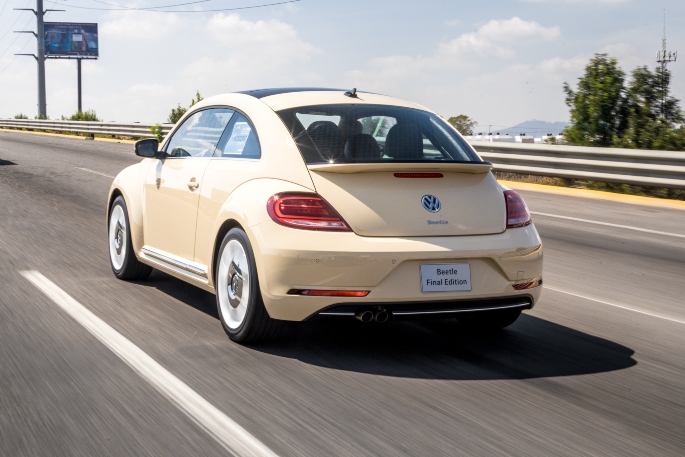 Many reviewers still find the Beetle’s styling as a “love it” or “hate it” proposition. Though most agree that the current generation does look much more handsome than previous generations, it hasn't escaped the "cute" stigma of its predecessors. That said, the similarly retro Fiat 500 and Mini face similar hurdles.

While interior design is high, materials are more similar to that of less expensive rivals, and fall behind VW's typically high standards. 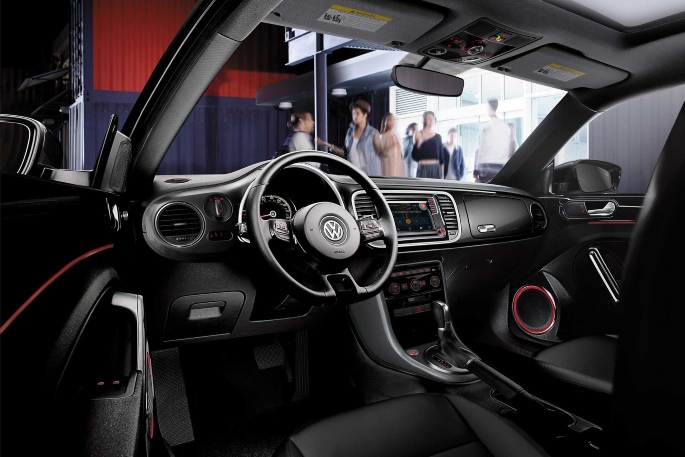 The use of hard plastic pieces throughout the cabin is a disappointment to many reviewers. Many of the plastic panels are body colored and are designed to add to the Beetle’s charm, but most reviewers believe that a more upscale interior feel would make the car much more competitive.

Apart from interior materials, the interior is simple and ergonomically pleasing, and overall build quality is slightly above average, according to reviewers. Testers universally praise the easy-to-use infotainment system and climate and secondary controls.

Comfort is good as a low seating position and high roofline provide even tall reviewers with ample headroom. The sharply-sloped roofline in both hatchback and convertible body styles don’t allow the same luxury for rear passengers, however. Reviewers note that legroom is better than other coupes in the class, a fact that somewhat makes up for the lack of headroom. All Beetle models seat up to four people.

The seats themselves are comfortable and supportive without being overly soft or aggressive, according to most reviewers. Many also appreciate the amount of elbow room and open space which the cabin provides front seat passengers.

Reviewers note no rattles or suspension crashing over particularly bumpy roads, and many are surprised at the low noise levels inside the cabin. The same praise is given to the convertible, noted as more robust than other soft-tops of this price.

Quality switches and dials also provide reviewers with a sense of strong fit-and-finish, even if materials are not best in class.

The Beetle could work well enough for daily commuting purposes, but utility and practicality are not its strengths. 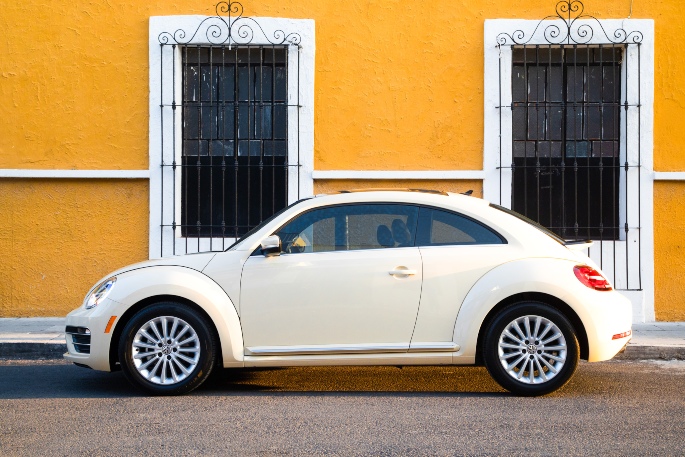 The sloped roof design makes it much more challenging to fit awkward items in the rear than many other hatchbacks with wider hatch openings. Reviewers find that rear visibility also suffers because of the small rear quarter window and steeply raked C-pillars.

Though the rear seats are not well suited for adults, the Beetle’s doors are large and wide enough to allow easy access to the back seats, according to reviewers. 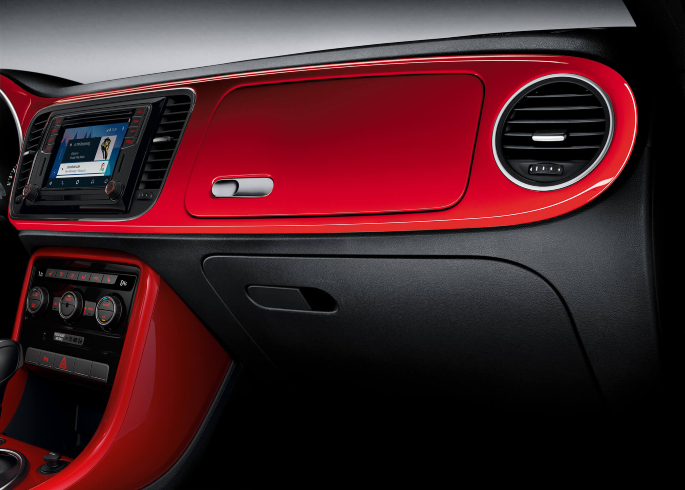 Technology and infotainment features are average for the class. 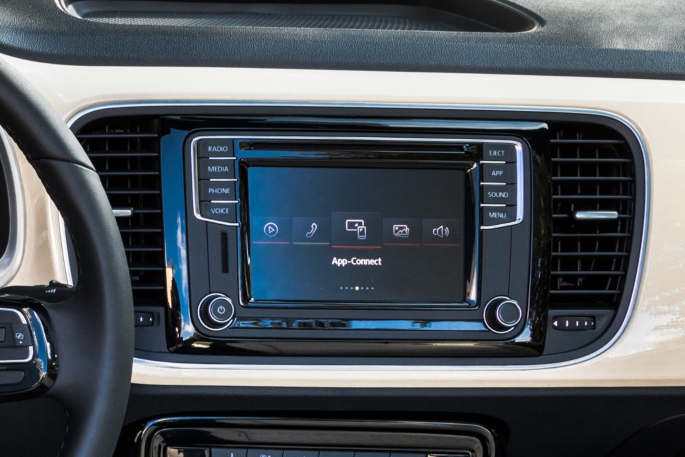 The Beetle is considered a safe vehicle for its size based on crashworthiness tests, but a general lack of the newest accident avoidance systems brings it down when compared to its competition.

The Insurance Institute for Highway Safety gave the 2019 Beetle a "Good" rating in front, side and roof crash tests, but its second-lowest "Marginal" ranking in the small overlap front crash test. It was not rated for front crash prevention, either.

The Volkswagen Beetle models provide an overall driving experience that perfectly fits their personality. Reviewers like how nimble, quick, and controllable it is around corners.

Acceleration from 0-60 miles per hour is achieved in about 7.5 seconds, better than many competitors. Testers praise the Beetle’s punchy engine and handling dynamics. It falls short of the Mini Cooper Hardtop 2-Door in both power and sharpness, however, but the engine is responsive, and power is more than adequate for the size of the car.

And other testers note that potential buyers may be turned away by the slightly stiff ride, but the seats are comfortable enough, and the suspension is sufficiently compliant that most should not have any issues.

Light, responsive steering is noted by reviewers to allow the Beetle to be agile and easy to drive under normal conditions. Testers are less enthusiastic about the brakes which most agreed were too lifeless and didn’t provide confidence during hard stops.

Fuel economy falls behind the competition, also because of the Beetle’s outdated six-speed transmission.

The 2.0-liter four-cylinder turbo achieves an EPA-estimated 26 mpg in the city and 33 mpg on the highway with a combined 29 mpg. Both hardtop and convertible models deliver the same estimated fuel economy despite the convertible’s additional weight.

Only the Mini Cooper S and John Cooper Works models, equipped with the two more powerful engine options, achieve less overall fuel economy. The Honda Fit and Toyota Yaris all far outclass the Beetle with a combined rating of 36 and 35 mpg, respectively.

The Volkswagen Beetle is a niche vehicle and does not provide a good value to the average customer when compared to more mainstream rivals that are similarly priced. But its distinctive style will likely be the reason buyers look to it.

Even the hardtop hatchback offers only average cargo capacity. Comfort is average, according to reviewers with the rear seats being expectedly cramped for headroom. A comparatively stiff ride does not help. The convertible variant is even less practical, but there are few soft-top options at this price point.

Safety is mostly satisfactory for a vehicle of Beetle’s size, but reviewers note that a lack of the most advanced accident avoidance features is becoming necessary to keep up with the competition.

Those who do not need the most practical vehicle and who want charm, quirky styling and decent performance will find the Beetle to be a winner. Testers agree that even a family of four can manage quite easily in day-to-day driving and longer trips with the adequate space and comfort the Beetle provides.

The Volkswagen Beetle is available in four different trim options:

The Beetle S starts at $21,790, including destination charge.

The S convertible starts at $26,890, including destination, and adds a power retractable soft-top roof, heated front seats and leatherette upholstery.

The Convertible Final Edition SE starts at $28,190 and includes the same features as the hardtop.

The Beetle SE starts at $25,290 with destination included.

Standard features include everything from the Final Edition SE, as well as dual-zone automatic climate controls, push-button start and front and rear parking sensors

Fully loaded, a 2019 Volkswagen Beetle Final Edition SEL Convertible will be priced around $33,000.