The Ford Flex is a three-row, five-door large crossover that shares a platform with the current Ford Explorer SUV and the discontinued Ford Freestyle and Taurus X crossovers.

It's available in front-wheel-drive or optional all-wheel-drive and it comes with either a V6 engine or an optional twin-turbo V6 engine.

Ford has sold only one generation of the Flex, though it was updated for the 2013 model year. The Flex will be discontinued in 2020. 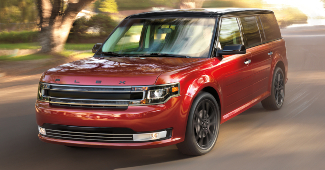 Unveiled initially at the New York International Auto Show in 2007, the Ford Flex sought to be a 7-passenger vehicle for the entire family without falling into the minivan category.

When it hit the market in 2009, it was introduced with three trim levels - the base SE model, the SEL and the Limited trims. Choices were offered between six or seven-passenger seating options and Ford offered roof colors in either body-color, black, or white or cream.

For the 2011 and 2012 models, Ford also sold a Titanium edition, which added to the Limited certain exterior and interior trim pieces.

The original engine was a 3.5-liter V-6, paired with a six-speed automatic transmission. It made 262 horsepower and 248 pound-feet of torque.
All-wheel-drive is optional on the SEL and Limited trim levels; front-wheel-drive is standard on all trims.

The engine was designed for fuel economy, while the Flex's intelligent, all-wheel-drive system improved driving capability in all weather conditions. This system could also anticipate wheel skids and slips before they occurred.The crossover was rated to tow up to 4,000 pounds.

The Flex combined a striking design with spaciousness; inside was a blend of functionality, textures and features.

The base SE model included tweed-like fabric for seats with miniature houndstooth inserts. The SEL model had bolsters with a more pronounced grain.The Flex Limited model had leather seat inserts with diamond-patterned perforations.

Options on the Flex included a class-exclusive refrigerator between the second-row chairs, removable and adjustable footrests in the middle seats, a one-touch system to fold and tumble the second row and a seven-color, programmable ambient lighting system which could be controlled from the dashboard based on your mood. 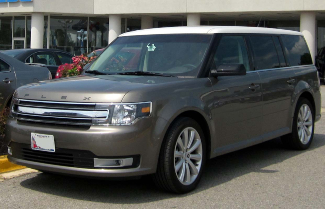 Ford updated the Flex significantly for the 2013 model year though it remained within the same generation of vehicle.

The basic exterior shape and design remained the same but Ford updated the styling of the front and rear to make it more sleek and upscale. Replacing its three-bar grille is a single-bar grille, while the headlights embrace the vehicle's natural curves to give the Flex a more muscular look. Contrary to the first generation that didn't bear Ford's oval blue emblem, this generation reads "F-L-E-X" above the grille with the Ford emblem at the bottom right corner.

Inside, this version retained its three rows of seats while reducing seating capacity to six. The Flex keeps with its earlier-generation trims (SE, SEL and Limited) while upgrading interior options such as dual-zone automatic climate control, an enhanced Sync system, heated front seats, a power liftgate and an upgraded sound system with HD radio. Depending on the trim, you also get an automated parallel parking system, a heated steering wheel, 10-way power driver's seat and adaptive cruise control.

The dashboard was also updated and a new three-spoke steering wheel was added. Ford offers optional packages such as the appearance package for the Flex. Included in this package are black-painted 20-inch wheels and black trim.

Towing capacity is higher in the second generation with 4,500 pounds with up to 100 percent torque transference capacity to the front or rear axle with the Flex's all-wheel-drive system.