A full-size pickup available in a number of cab sizes, engines, and bed lengths. 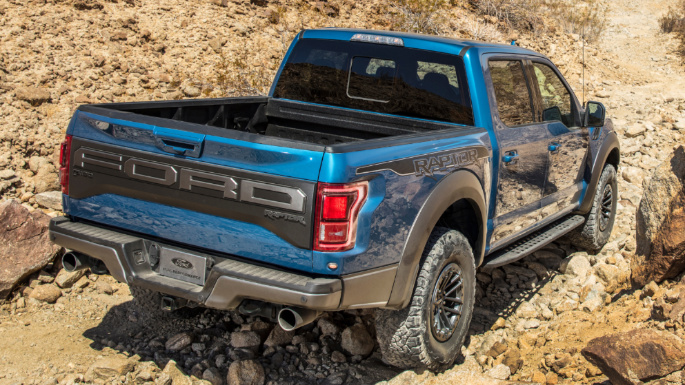 Ahead of a redesign for 2021, the 2020 F-150 adds standard driver assistance features on the top four trim levels under the Ford Co-Pilot360 label, including things such as blind-spot monitoring and automatic emergency braking. Top-tier Limited models also add adaptive cruise control and built-in navigation. All models receive some new exterior paint choices.

The F-150 competes with the Chevrolet Silverado 1500, GMC Sierra 1500, and Ram 1500, as well as the Nissan Titan and Toyota Tundra among full-size pickup trucks. While the Nissan and Toyota are limited to V8 engines, the American rivals offer numerous powertrain options, including turbodiesel V6 engines, like the Ford F-150. 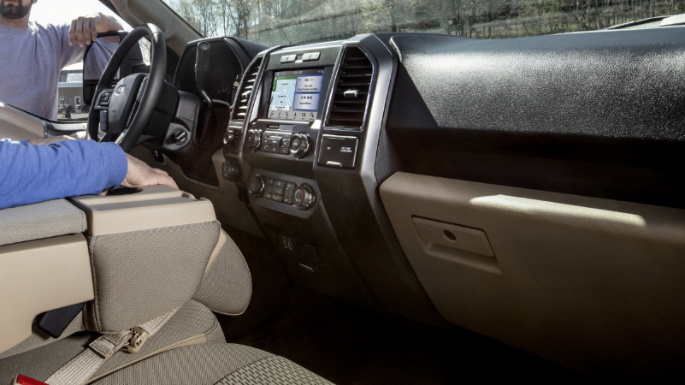 Platinum and Limited models can be equipped with adaptive cruise control, as well. While its rivals offer similar technology, the Ford makes it more accessible and standard on more variants. It's also not lumped into expensive option packages with a lot of other unrelated features. 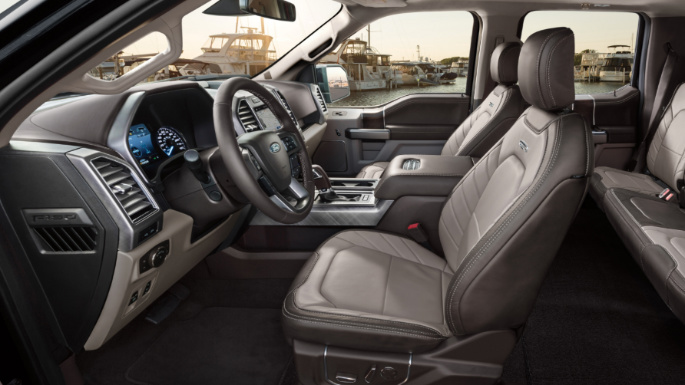 Base XL models are sparsely equipped and mostly aimed at fleets or as work trucks. XLT and higher models come with an infotainment system with Apple CarPlay and Android Auto connectivity, as well as power windows and locks, but going for a four-door SuperCrew model pushes the price over $40,000 before options. In fact, it's easy to spend a lot of money on options, such as the turbodiesel V6 that costs as much as $5,000 depending on the trim level.

The top-tier F-150 Limited starts at an eye-watering $70,000 but includes pretty much every option Ford will throw at its truck. It gets the powerful turbocharged 3.5-liter V6 as standard, along with a panoramic moonroof, adaptive cruise control, a 360-degree camera, and active park assist. That's competitive with high-end versions of the Ram, Sierra, and Silverado, though. 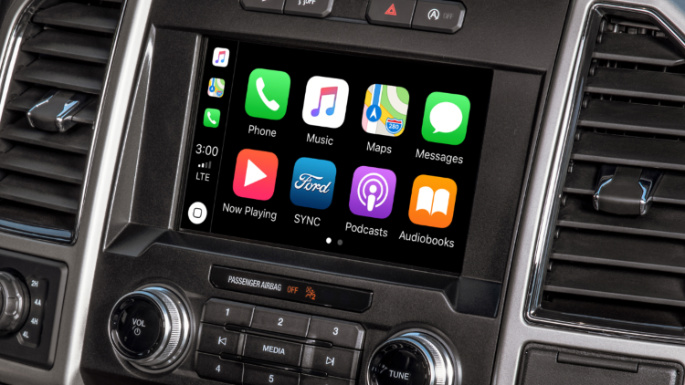 All but the base XL get Ford's Sync 3 infotainment system, which includes Apple CarPlay and Android Auto compatibility and a wi-fi hotspot. Most models offer built-in navigation, at least as an option.

Ford's Sync 3 isn't the best system in the class, with some confusing menus. And the F-150's touchscreen is comparatively small against the Ram's available 12-inch portrait-style touchscreen. Ultimately, though, it gets the job done.

The FordPass Connect system is also available on most models, and it monitors basic functions such as fuel levels, locks, and remote start. It can also be used to pay for parking or gas.

The F-150 tries to keep up the competition with features such as a power-sliding rear window and a remote release for the tailgate on uplevel models. Some models also offer power running boards that retract when the doors are closed. These features aren't unheard of among luxury pickup trucks, but they are still welcome on the most expensive versions of the F-150. 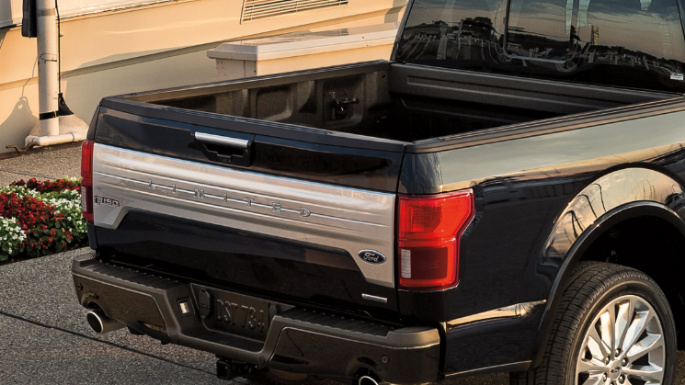 The Regular Cab typically has a front bench seat split 40/20/40 and minimal storage space behind the seats.

The Super Cab has small half-doors that allow access to a cramped rear seat.

Most buyers will be best served by the four-door SuperCrew, which offers real back seat space that's competitive with other four-door rivals. 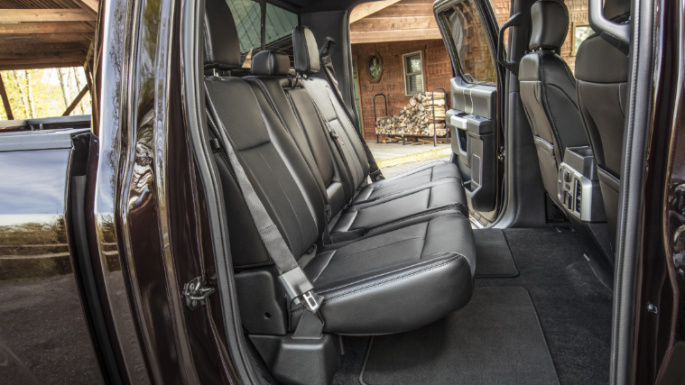 Towing capacity ranges from 7,600 pounds with the base 3.3-liter V6 to 12,200 pounds on models with the turbocharged 3.5-liter V6 and the maximum towing package preparation. Again, these figures are basically tied with the F-150's major competitors. 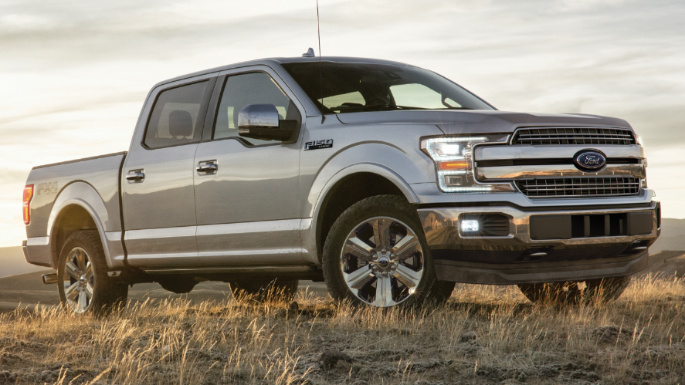 Each F-150 trim level has a different grille and trim treatment, so there's a wide range of styling differentiation for customers to choose from.

Nevertheless, the F-150 is a handsome truck that has aged well throughout this generation. The all-new generation that replaces it is an evolution in terms of design, rather than a wholesale reboot, so buyers of this model year don't have to worry about their truck looking outdated. 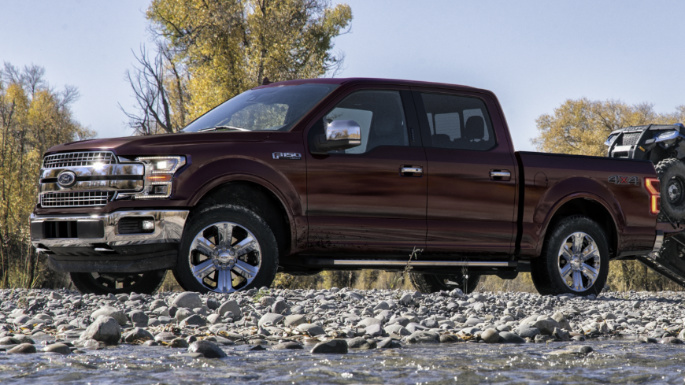 The base 3.3-liter V6 isn't quick, but all other F-150 engines have plenty of performance. The turbocharged 2.7-liter Ecoboost V6 is likely satisfactory for most conditions, with abundant power off the line. All but that base V6 model get a 10-speed automatic, which is fairly responsive, but no more so than the eight-speed automatic in a Ram 1500.

The high-output turbo 3.5-liter Ecoboost V6 found on the Raptor, and Limited models has a vast surplus of power for such a large vehicle, thanks to enormous low-end torque and virtually no turbo lag.

While the F-150 is just as bulky in tight spaces as every other full-size pickup rival, the ride is stiffer and bouncier than the Chevrolet, GMC, and especially the Ram.

Opting for models with FX4 off-road suspension, especially the Raptor, makes the ride on pavement even less settled. It can't compete with the air suspension-equipped Ram 1500 for car-like ride qualities, which is something to consider when spending more than $60,000 on the high-end models.

These numbers are competitive for the class. The efficiency of the turbocharged 2.7 and 3.5-liter V6 models, however, pushes the F-150 slightly ahead of the V8s from rivals that offer equivalent performance, however. The turbodiesel model is also highly competitive with rival diesel models from Chevrolet and Ram, even if the Ram slightly edges it on highway economy.

What's it Going to Cost Me?

The F-150 XL starts from $30,440 MSRP, including the $1,695 destination charge. The XL is available in Regular Cab, Super Cab, and SuperCrew models and in three bed lengths.

The XLT starts from $36,455 MSRP and is also available in three cab styles and three bed lengths. It adds to the XL the Sync 3 infotainment system with Apple CarPlay and Android Auto compatibility, alloy wheels, chrome exterior trim, power windows, locks, and mirrors, auto on/off headlamps, and cruise control. It offers the two upgraded engines, while the SuperCrew model can be equipped with the 3.0-liter turbodiesel V6.

Options include the FX4 Off-Road package, as well as the 301A Mid package that includes features such as a power driver's seat, auto-dimming rearview mirror, and satellite radio. Built-in navigation is also available.

The Luxury Package includes a tailgate step with an assisted tailgate drop, power running boards, 20-inch alloy wheels, and inflatable rear seatbelts. The Technology and FX4 packages are also available, as are the 3.5-liter turbocharged V6 and 3.0-liter turbodiesel V6. A panoramic moonroof is also available.

The F-150 Raptor starts from $55,150 MSRP. It's available as a Super Cab or SuperCrew, but only with the shorter bed. It gets the high-output version of the turbocharged 3.5-liter V6 engine which produces 450 horsepower, standard four-wheel drive, off-road suspension and tires with 17-inch alloy wheels, a distinctive front end, revised instrument panel design, and its own set of interior trim pieces.

The Platinum starts from $57,215 MSRP. It comes only as a SuperCrew with a choice of two bed lengths. Over the King Ranch, the Platinum adds the Bang & Olufsen audio system, navigation, polished 20-inch alloy wheels, built-in navigation, more chrome exterior trim, and real wood interior trim.

The Luxury Package includes the contents of the Technology Package, as well as adaptive cruise control with pedestrian detection, and a tailgate step. The FX4 Off-Road package is also offered, as are the 3.5-liter turbo V6 and 3.0-liter turbodiesel V6.

The top-tier F-150 Limited trim starts from $69,430 MSRP. It comes only as a SuperCrew with the shorter bed. It adds 22-inch wheels, more metal exterior trim, the high-output 3.5-liter turbocharged V6, a panoramic moonroof, 360-degree camera, and a remote tailgate release. Apart from two different towing packages, there are no options for the Limited.

XLT models offer most of the equipment pickup buyers tend to go for, and it also offers the widest variety of cab styles and bed lengths, as well as engine options. But tick too many option boxes and a well-equipped XLT costs more than a Lariat, which comes with leather upholstery and the turbocharged engine as standard, so it's worth considering the higher trim level.

Most people will be satisfied with the turbocharged 2.7-liter V6, which is more efficient and less costly to option than the 3.5-liter or the 5.0-liter V8.

The turbodiesel V6, while extremely fuel-efficient, is an expensive extra. Given the widely varying cost of diesel fuel, it's only worth it for buyers who do a lot of highway miles and hauling and towing, and even then, it may not save money in the end. 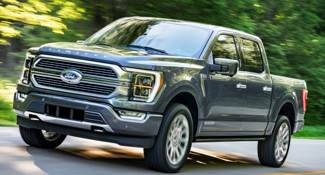 Ford F-150 Generations
Autolist Editorial | Jun 26, 2020
The first generation of Ford F-Series pickup trucks was introduced in 1948 and is now one of the most popular vehicles sold. See all the Ford F-150 generations here. More ... 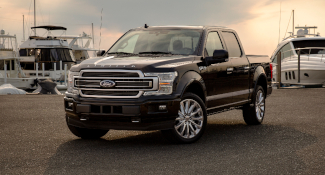 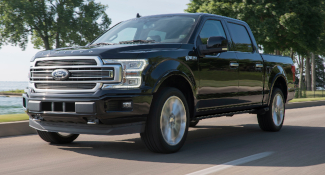