Ford Edge is a midsize crossover that's helped spawn a growing segment of five-seat, near-luxury vehicles. It sits between the Escape and the Explorer in Ford's crossover lineup. Ford began production of the Edge in 2006; it's built two generations of the crossover, each with a significant update halfway through its lifespan. 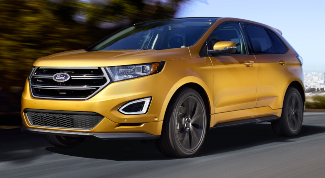 The second generation of Edge was built on the Ford CD4 platform, which was still shared by the Lincoln MKX. The wheelbase increased to 112.2 inches from the previous 111. Curb weight was now 3,912 for the FWD vehicles and 4,060 for the AWD.

The exterior was redesigned and the grille now resembled the Taurus and Explorer with its wide horizontal slats. The new headlights were elongated and curved. The interior featured more room and a rear-view camera.

The highest-powered engine was the 2.7-liter twin-turbo EcoBoost V6 that made 315 horsepower; this engine was used on the Edge Sport models. All versions of the Edge had a six-speed automatic transmission.

Ratings for the 2016 model from the NHTSA included a five-star overall rating and five-star ratings in all other categories except rollover for the AWD, which scored a four-star rating. The Insurance Institute for Highway Safety scored the 2015 Edge with Good ratings in three out of four categories.

Ford gave the Edge a facelift for the 2019 model year. The wide-slat grille was replaced with a honeycomb grille, which was similar to the Explorer that debuted a few years prior. The headlights and taillights were redesigned to give the Edge a sleeker, more upscale appearance. The newly-debuted Edge ST became the top trim. It offered a 2.7 liter EcoBoost V6 engine featuring twin turbochargers and putting out 335 horsepower. The ST showed a dark mesh front grille with a restyled interior and aluminum-alloy wheels.

The 3.5-liter V6 was discontinued and the horsepower on the base 2.0-liter EcoBoost four-cylinder engine was bumped to 250 from 245. An eight-speed automatic transmission premiered for all trim levels. The auto stop-start technology on this transmission gave the base EcoBoost four-cylinder an extra five horsepower. All Edge trims benefited from increased fuel economy as well. Each trim level now offered aluminum-alloy wheels as an option as well as new combinations for exterior colors and interior trim.
An optional 12-speaker surround system by Bang & Olufsen replaced the previous Sony system.

Three new safety features were also added to the 2019 Edge, including post-collision braking, evasive steering assist and adaptive cruise control with lane centering for stop and go traffic. The 2019 Edge offers a total of nine exterior colors, including some that are brand new for that year.

A total of four trims were offered for 2019 starting with the base SE, SEL, Titanium and ST. 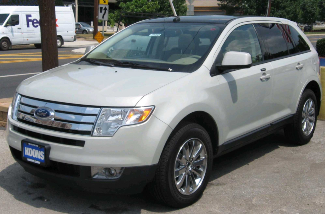 The first generation of Edge was built on the Ford CD3 platform, which was shared with the Lincoln MKX. It offered four trims, including the SE, SEL, Limited and Sport.

Three engines were available in this generation. The model years between 2007 and 2009 offered a Duratec 3.5-liter V6 putting out 265 horsepower. An upgraded 285-horsepower version was available from 2010 to 2014. The standard transmission was a six-speed automatic transmission.

Safety features for the first generation Edge included dual front airbags, side-impact and side curtain airbags, ABS, traction and electronic stability control along with a tire-pressure monitor. The National Highway Traffic Administration gave the Edge five stars in front driver and side impact crash tests. It got four stars in rollover and front passenger crash tests.

Ford gave the Edge a mild facelift for 2011.

The exterior was modified in the front along with the wheels and bumper. The interior was also revamped with upgraded materials and touch controls that replaced various hard buttons and switches. From 2011 two additional engines were offered: A Duratec 3.7-liter V6 putting out 305 horsepower for the Sport, and the EcoBoost inline-four putting out 240 horsepower.

The trims remained the same with the Limited now offering optional equipment like adaptive cruise control, blind spot information and HID headlights. The seats were trimmed with charcoal black leather and it now featured 22-inch aluminum wheels with black spokes.