The Ford Edge is a midsize crossover that competes with the Honda Passport, Nissan Murano, Jeep Grand Cherokee, and Chevrolet Blazer. It is aimed at new car buyers that need the extra cargo space and utility of a crossover, but don’t want the added bulk of a full-size SUV. The Edge has been on sale since 2007 in the United States and is now in its second generation.

The Ford Edge has received a facelift and a new trim level for the 2019 model year. The grille and front fascia were redesigned, and the new ST trim level comes with a turbocharged V6 engine that makes 335 horsepower and unique styling inside and out.

The Edge is a successful model for Ford, selling over 100,000 units every year since 2010. It slots in between the smaller Escape and the larger, three-row Explorer and splits the difference between the two in price. It is available in four trims: SE, SEL, Titanium, and ST.

TL;DR: The Edge’s updated exterior with a new grille and front fascia places it closer in design to the Ford Explorer.

The Edge’s exterior was updated for the 2019 model year to include a new grille, new wheel choices and updated color combinations. The three-bar grille that adorned the front of previous Edge models is gone, replaced by a blacked-out honeycomb-style grille. 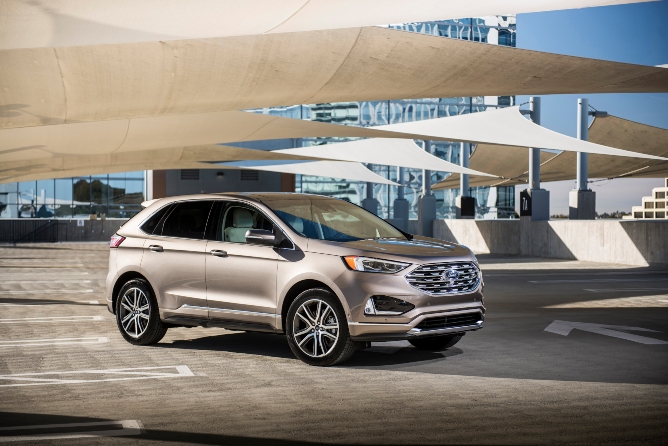 The new look placed the Edge closer to the Explorer’s appearance after recent updates. Other exterior changes for 2019 include available bi-LED headlights and fog lights for SEL and higher trims and five new wheel choices.

Reviewers praise the Edge’s unique styling and its sporty personality, noting that higher trims of the model approach luxury vehicle levels of refinement in their design. 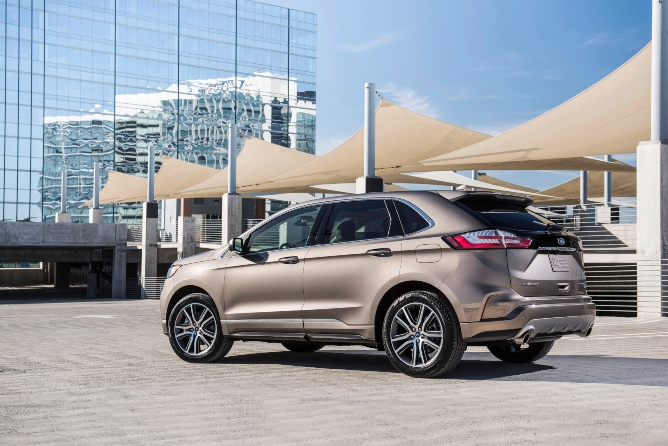 TL;DR: The Edge has a roomy interior with premium materials and an upscale feel.

Critics praise the Edge for its upscale interior feel and comfortable seats. Because it does not have a third-row seating option, legroom in both rows is generous. Front seat passengers enjoy wide and supportive seats in all trims, though some may find the heavily-bolstered sport seats in the Edge ST to be a bit too form-fitting. The interior materials, even at the base level, are excellent in the Edge, and give the crossover an upscale appearance and feel. 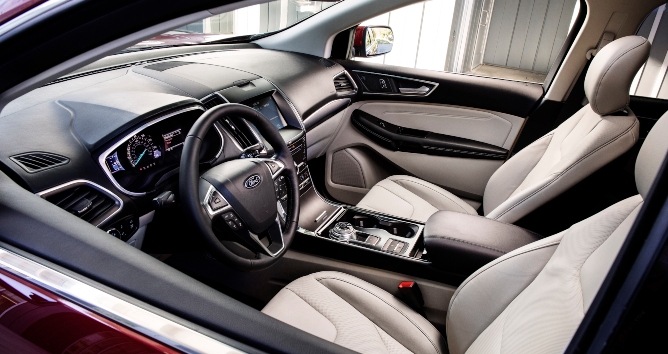 The rear seat is large enough for three adults, and a gently sloping roofline boosts headroom. Buyers with children in car seats will find a large rear door opening and ample room to load and unload the seats without bumping heads on door sills or the roof. Bulky car seats may be restricted to the passenger’s side if the driver is six feet or taller.

The Edge Platinum is available with lighter interior colors, but the new ST trim comes only with black leather and faux-suede interior. The dark materials combined with black upholstery can make the interior of the Edge feel cave-like and cramped, but the available panoramic sunroof opens up the cabin and helps lighten up the interior feel.

The dashboard layout is simple and easy to understand. Buttons are clearly labeled and are spaced in such a way as to make them easy to use when the vehicle is in motion. All Edge models now come with a rotary gear shift dial, which takes some time to get used to. The large center stack is uncluttered and features the infotainment screen and substantial rotary volume control. Other controls are contained either in the screen or in the driver information setup that is housed in the instrument panel.

TL;DR: The Edge, benefitting from only two rows of seating, offers a vast cargo area and ample small-item storage space.

The Ford Edge is considered to be a usable and practical vehicle, even in the more luxurious or performance-oriented trim levels. Because it does not come with a third-row seating option, the Edge has a large cargo area that reaches 39.2 cubic feet behind the second row. The rear seats fold with a 60/40 split but do not lie completely flat when down, a note that many reviewers call out. 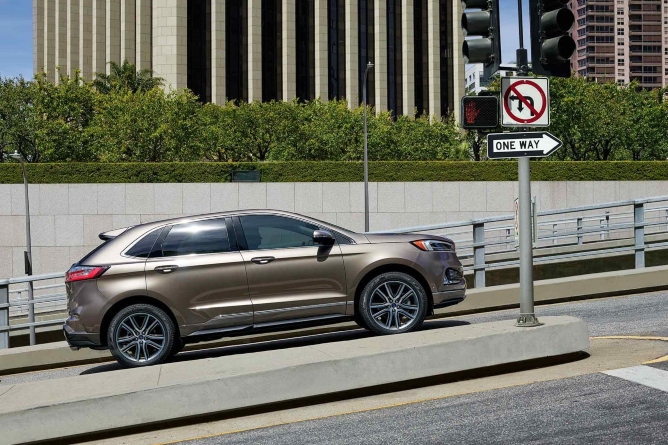 Small item storage is generous, but critics take issue with the shapes of some storage areas. The center console bin is deep and has two tiers, but is narrow, which may limit the types of items that can be stored there. The dash has a small storage area above the infotainment screen, but its shallow shape makes it only suitable for cards or paper items. 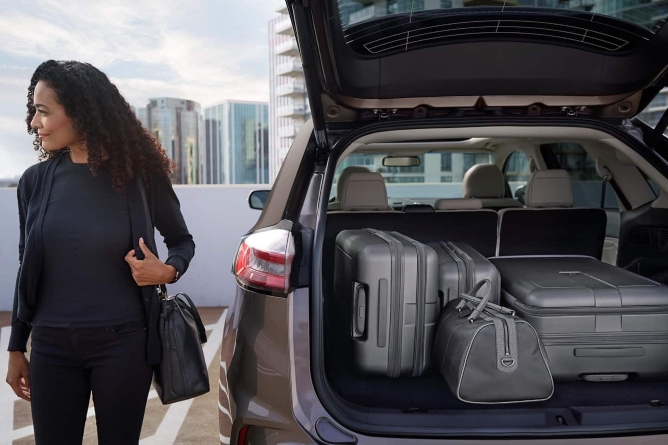 Door pockets are long and have cupholders in each door, but taper sharply inward, which can limit larger item storage. The Edge’s interior has two large cupholders in the front row and two more in a folding armrest for second-row passengers.

The rear seats have LATCH points for car seats that are exposed and easy to access, unlike many vehicles that use material or flap to hide the anchor points for appearance purposes. The wide rear seat accommodates two car seats easily and could fit three across if at least one is a smaller booster-style seat.

TL;DR: The Ford Edge can be equipped with a wide variety of entertainment technologies, and is well-equipped even in base trim levels.

Higher trims are available with wireless smartphone charging, but all versions of the Edge come with USB inputs and 12-volt charging outlets. Connecting a smartphone is quick and seamless. The available SYNC 3 infotainment system comes with an 8-inch screen and adds Apple CarPlay and Android Auto. 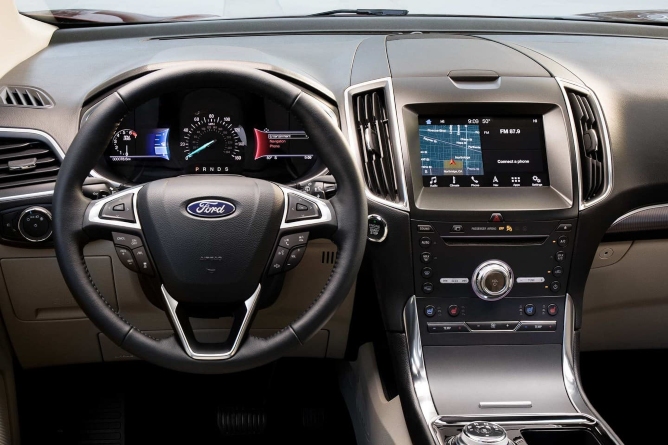 Reviewers praise this system for being easy to use, with colorful graphics and responsive controls. Some vehicle controls for climate and lighting are included in the infotainment unit, which may require a learning curve to find and use. The system is also available with navigation, though most people will be satisfied with maps that come with Apple CarPlay and Android Auto. Reviewers note that voice controls work well and respond to natural commands without much fuss.

The Titanium and ST trims come with a B&O sound system by Bang & Olufson with 12 speakers and HD radio. Reviewers like the upgraded sound system’s volume and sound clarity.

New for 2019, the Edge comes standard with Ford’s Co-Pilot360 safety system, which brings blind spot monitoring, rear cross-traffic alerts, a lane keeping system, and a pre-collision system with pedestrian detection and automatic emergency braking. Adaptive cruise control with lane centering is available. Critics like the system’s alerts and the fact that they are not intrusive or frightening. The lane centering system can be overly aggressive at times, causing the vehicle to wander in its lane.

The Edge was given “Good” ratings from the Insurance Institute for Highway Safety for driver-side, passenger-side, side, and roof crashworthiness. The head restraints and seats were also given “Good” ratings. Headlights were rated as “Poor.” Child seat LATCH anchors were given an “Acceptable” rating, and front crash prevention was rated as “Superior” for all models. The gave the 2019 Edge five starts in its crash testing.

TL;DR: The Edge offers an engaging driving experience and comfortable ride. The ST trim has near sports car-like acceleration and handling.

The most trims of the Edge come standard with a twin-scroll 2.0-liter EcoBoost engine and an eight-speed automatic transmission. The engine makes 250 horsepower. Reviewers praise this powertrain’s smooth acceleration and quiet performance, noting that power delivery is more than adequate for most people and that acceleration to highway speeds is nearly effortless. The Edge offers confident handling and an enjoyable drive with stability in corners. Critics note that steering feel is nicely weighted and that the Edge maintains a comfortable ride over rough road surfaces.

The Ford Edge ST comes with a twin-turbocharged 2.7-liter V6 engine that has 335 horsepower and standard all-wheel drive. This powertrain combination offers brisk acceleration and effortless passing on the highway. The ST trim also comes with upgraded suspension and wheels, which brings near sports car-like handling and driving dynamics. Critics note that, while performance is increased over the base Edge, it still falls short of more performance-focused competitors like the Porsche Macan and others. The ST’s larger wheels and stiffer suspension also make for a busier ride over imperfect roads.

TL;DR: The Ford Edge is considered to be a reasonably fuel-efficient vehicle. It has many improvements over the previous model year to bump fuel economy.

These numbers make the Edge competitive in its class, especially against rivals from Toyota and Honda. Ford updated the 2019 Edge with an all-wheel-drive system that is powered by artificial intelligence to determine when to activate power delivery to all the wheels, rather than just two. The Edge also has standard start-stop technology that shuts off the engine when the vehicle comes to a stop to conserve fuel. Other updates include active grille shutter for better aerodynamics, an exhaust gas recirculation system, and an active warmup function for the new eight-speed transmission.

TL;DR: The Edge comes in four trims with a high degree of customization.

The Ford Edge is considered to be a good value that delivers near-luxury features in all trim levels. Reviewers like the Edge’s refined ride and upscale materials and construction. They note that few other crossovers have such an upscale approach in even the base trim levels. Buyers needing three rows will need to upgrade their search to a larger vehicle like the Ford Explorer, GMC Acadia, Hyundai Santa Fe or Kia Sorento. Overall, critics enjoy the Edge’s roomy interior, engaging driving experience, and respectable fuel economy.

Critics praise the Edge ST for its superior acceleration and handling but note that the price and features availability may make lower trims a better purchase. Many recommend stepping down to the SEL trim, which includes features like SYNC 3 and rear parking sensors with a much lower price.