The 2019 Dodge Grand Caravan is a minivan capable of seating up to seven passengers. While it has not had a total redesign since 2008, it has been extensively updated over the years. It competes with other minivans such as the Honda Odyssey, Toyota Sienna, and Kia Sedona, as well as the Chrysler Pacifica.

Apart from a 35th Anniversary Package that incorporates special badges and adds popular features for a modest discount in honor of the Dodge Caravan's original introduction for 1984, the 2019 Grand Caravan has been mostly unchanged from last year.

Large amounts of cargo space, a powerful engine and low starting price compared to rivals have kept the Grand Caravan's sales steady in recent years. Though its design is becoming dated, its price point is attractive for value-seeking buyers, with a base price that is thousands less than other minivans.

Within the entire minivan segment, the Dodge Grand Caravan is the most traditional in its appearance. Its styling was last significantly updated in 2011, and its age shows when placed alongside more modern designs. Unlike the smoother profile even though the overall shape is the same newer Chrysler Pacifica and Honda Odyssey, the Grand Caravan is rather boxy in its profile and looks more like an old minivan. 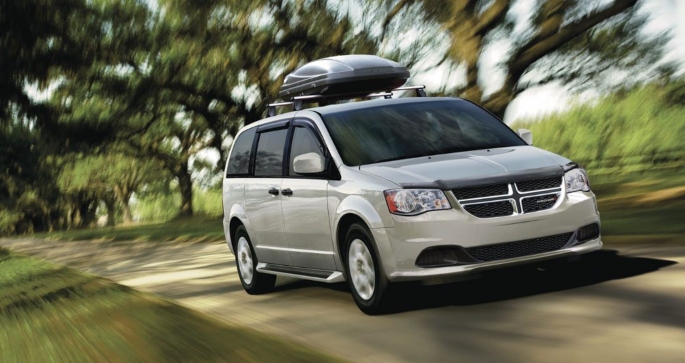 The advantage of this, however, is that the Dodge has lots of glass area that help makes seeing out of the vehicle, especially for children, very good. The windows in the sliding side doors are power operated and slide down for more ventilation, something that has become common in minivans today.

The rear of the Grand Caravan is simple, with squared taillights and a large, upright rear hatch. It reveals a square-shaped cargo area that makes loading large items more accessible.

Various trim packages are available depending on the trim level, while 17-inch wheels, standard on all Grand Caravan models. The gloss black wheel option helps mitigate this and gives it some needed pizazz. 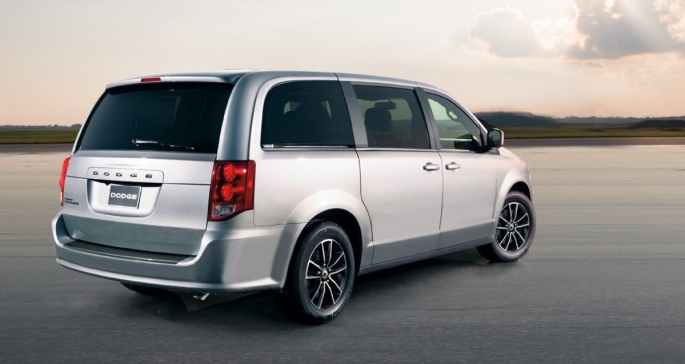 Even though reviewers generally agree that the Grand Caravan is in desperate need of a refresh, they also agree that the exterior styling of the minivan is not unattractive and further shows that functionality and practicality are prioritized over form.

The Dodge Grand Caravan suffers in interior quality. Reviewers universally agree that the minivan's low price tag shows the most in the lack of interior quality. They note that materials are generally cheap and the technology is generally behind the times when compared to all new vehicles. 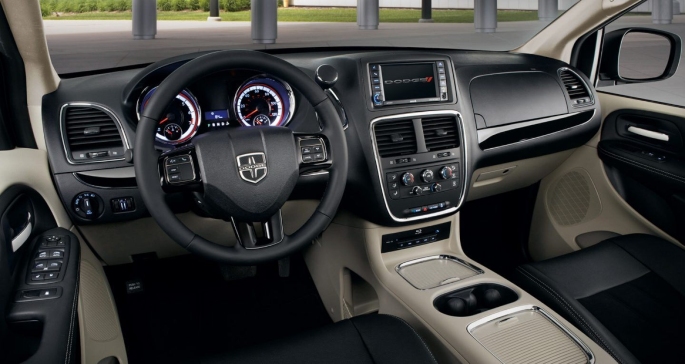 Hard plastics are used throughout the interior, but there are some strategic places covered with soft-touch materials. A leather-wrapped steering wheel and available leather upholstery on higher trims give the Grand Caravan a little bit of refinement, according to testers.

Overall comfort is rated more highly by reviewers. Most note that the front seats are especially accommodating, with generous amounts of space for driver and passenger legroom. Most also note that while the front-row seats are comfortable, second-row seating comfort is higher due to the amount of legroom rather than actual seat comfort. That is because the seats themselves can feel stiff because of the design that allows them to fold. The third row is roomy, but the seating angle is odd, again because of the folding design.

Back and lumbar for the driver and front seat passenger are noted to be good. Second- and third-row seating is slightly less comfortable, according to reviewers. Testers note that headroom is satisfactory regardless of which row passengers choose. 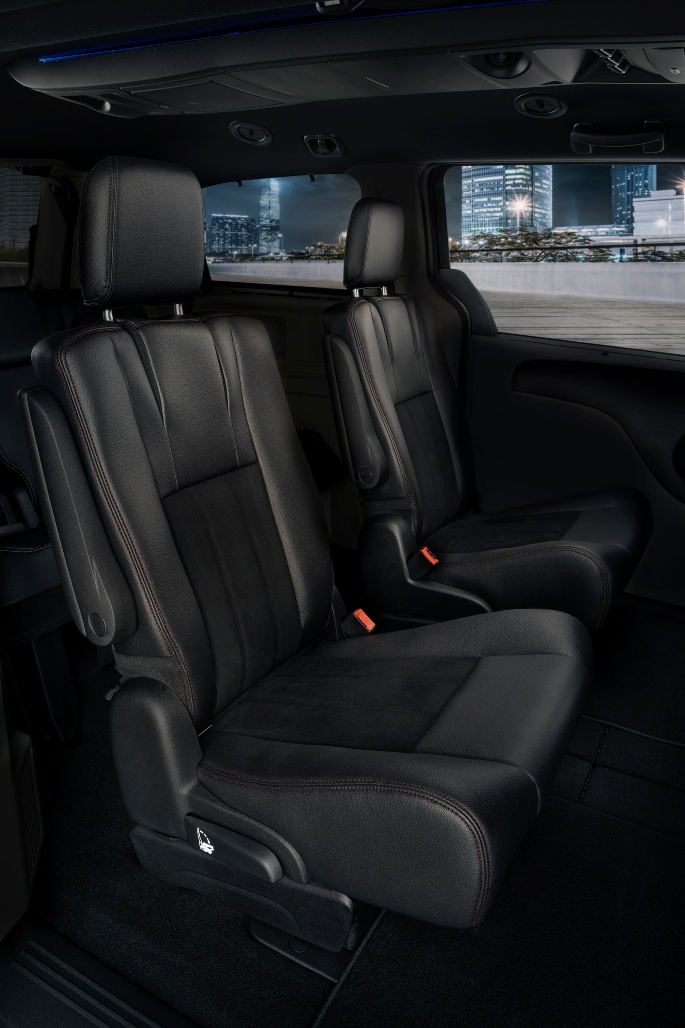 Climate, radio and other significant controls are easily reachable for the driver and passengers, according to most reviews.

Utility and practicality are generally high, but the lack of some features on the Grand Caravan brings its score down when compared to its competition. Other minivans offer eight-passenger seating, but the Dodge is limited to no more than seven passengers. The Grand Caravan is, however, offered with the choice of a second-row bench seat or captain's chairs, capacity remains at seven passengers. 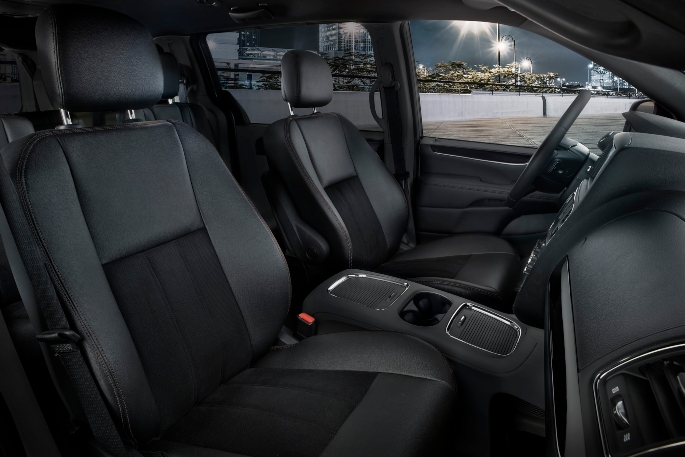 Cargo space is good with a total of just over 140 cubic feet with only the front seats in place. About 80 cubic feet is available when the third row is folded, and 31 cubic feet available with all seats in the upright positions.

Dodge's available Stow 'n Go seating gives the minivan some extra points as neither the second or third-row seats need to be removed from the vehicle to maximize cargo space. Instead, they fold into wells carved into the floor and create a totally flat space for objects to be easily loaded. The cargo area is vast, with an easy load height, with a tailgate that opens well out of the way. An optional power liftgate is available. 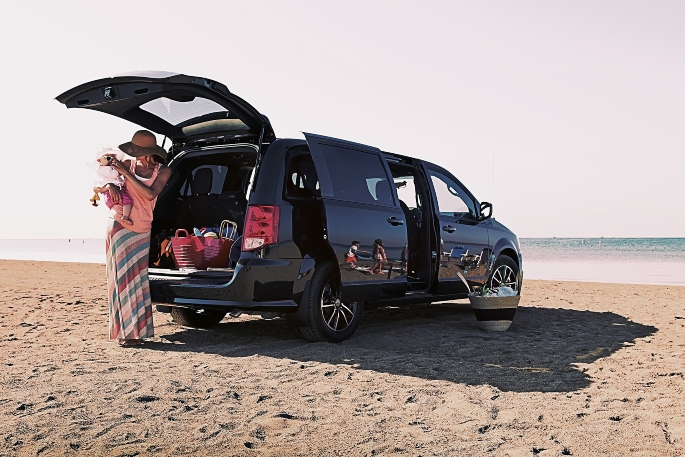 Getting into the Grand Caravan is easy, according to reviewers. Available power-sliding rear side doors make it easy for passengers to slide into the second row, while the captain's chairs can be folded and tumbled forward to allow for better access to the third row.

Small item storage is noted to be plentiful throughout the cabin. Roof rails add the possibility of additional exterior storage.

Towing capacity is slightly better than other minivans at 3,600 pounds when properly equipped. Most other vans in the segment are rated at 3,500 pounds.

Technology and infotainment features are two of the areas most lacking in the Grand Caravan, especially when compared to others in the segment. 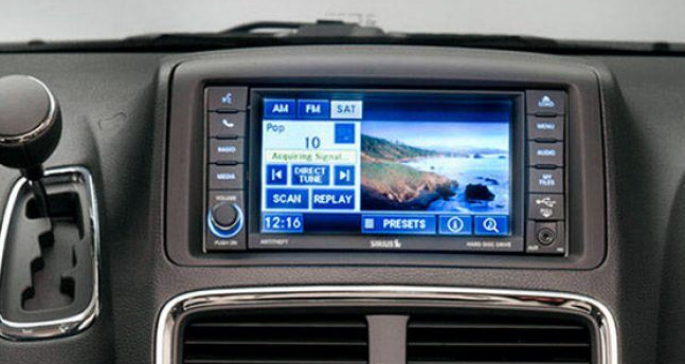 Apple CarPlay, Android Auto, wireless device charging, and a Wi-Fi hotspot are all missing from the list of available features. Reviewers are also unimpressed by the Uconnect infotainment system. They note that the system is very slow to respond, looks dated, and falls far behind most other systems overall – including that of newer systems on other Fiat Chrysler products such as the Pacifica minivan. A 6.5-inch touchscreen display is the only display size available.

Most of the latest driving assistance features are absent from the Dodge Grand Caravan's list of standard or available features. Rear parking sensors are the only optional safety feature the Grand Caravan has to offer. Blind-spot monitoring, rear cross-traffic alert, and adaptive cruise control are not offered on any trim level.

Crash test ratings are mixed. The National Highway Safety Transportation Administration awards the Grand Caravan with an overall four-star rating out of a possible five.

The Insurance Institute for Highway Safety rated the Grand Caravan highly in some tests, but gave it the lowest rating of Poor in the small overlap front crash test and for the strength of its headlights, putting the vehicle behind all other minivans.

The Dodge Grand Caravan is also a mixed bag when it comes to the driving experience. Minivans may not be known for providing fun behind the wheel, but reviewers find the Grand Caravan shows its age in this area, too.

It is only available with one engine option, a 3.6-liter V6 producing 283 horsepower and 260 lb.-ft. of torque, and is paired with a six-speed automatic transmission. Most reviewers agree that the engine is powerful enough, but the overall powertrain shows its age. The transmission is noted to be unrefined and slightly uncertain when shifting. Acceleration is average for the class with a 0-60 mph time coming in around eight seconds, according to testers.

Braking is also average among minivans with a stopping distance of 180 feet from 70 mph. Reviewers note that hard braking didn't inspire an overwhelming amount of confidence, while normal braking is handled much better. Pedal feel is indicated to be awkward at times, but under normal driving conditions, it is merely acceptable.

The Grand Caravan does much better in overall handling, according to reviewers. It is said to be surprisingly agile for how tall it is. Steering feel is noted to provide better feel than many other minivans in the segment. Reviewers note that spirited driving is hindered by lackluster hard braking feel and the placement of the shifter, which is located between the steering wheel and the infotainment screen, makes manually changing gears difficult. Most testers agree that everyday driving is accomplished enough, but is still less refined and comfortable than newer competitors.

Fuel economy also lags behind others in the segment.EPA estimates of 17 mpg in the city and 25 mpg on the highway, with a combined rating of 20 mpg.

One trick the Grand Caravan has up its sleeve is that it can run on E85 gasoline, which can produce more power, but EPA estimates of 12 miles per gallon in the city and 18 miles per gallon on the highway bring the combined fuel economy rating down to 14 miles per gallon.

The Kia Sedona, the closest competitor in terms of fuel efficiency, returns 18 mpg in city driving and 24 mpg on the highway and 21 mpg combined. Apart from the Chrysler Pacifica Hybrid, the Honda Odyssey leads the segment with a combined rating of 22 mpg. Most newer minivans have more than six speeds in the transmission or other modern fuel-saving technologies.

The Dodge Grand Caravan presents a mixed value to its buyers, depending on their needs.

A brand new base model Grand Caravan is thousands of dollars less than other base model minivans. Space and interior versatility also presents added value. The seating configurations allows extreme versatility for both passenger and cargo space. Towing capacity is also favorable against other minivans and even some three-row SUVs. If purchase price and interior flexibility are high priorities, the Grand Caravan has a lot to offer.

The Grand Caravan will not present good value to those who desire the latest safety features, the best technology, and the best possible fuel economy for a vehicle of this size, as well as those who need eight seats in their vehicle. Fit and finish is good, but interior quality also suffers compared to the competition, according to those who have tested the minivan. Most agree that everyday driving is acceptable, but overall, driving dynamics fall behind the competition.

The Grand Caravan is starting to show its age, according to reviewers. It is beginning to suffer at the hands of newer competitors with much better standard equipment, despite its substantial sales numbers. Weak resale value and low projected reliability allow used examples of the Grand Caravan to present a very affordable option for those who need the space and a simple means of transportation.

Almost every reviewer agrees that the best value Grand Caravan is the top-of-the-line SXT trim, even though it still falls behind the competition when it comes to modern safety and convenience technologies. Most also agree that the Chrysler Pacifica, which is also sold at most Dodge dealerships, presents a better overall value.

While the Chrysler Pacifica's most expensive version can eclipse $50,000, the Pacifica's lower trims offer a more refined driving experience and a better list of safety and technology features.

The base Grand Caravan SE starts at $28,285, including destination charge.

Second-row captain's chairs with Stow 'n Go seating are optional, as well as the Uconnect Hands-Free Group package. It includes satellite radio, Bluetooth, a USB port, and a leather-wrapped steering wheel and shift knob. The 35th Anniversary Edition package includes the captain's chairs and a power driver's seat, along with special badges, piano black interior trim and red stitching on the seats.

The SE Plus adds 17-inch alloy wheels, foglights, automatic headlights, Uconnect voice command capability, a front middle console, and the Blackout package, which adds black gloss wheels and a black grille, all in addition to the features from the base SE.

Second-row captain's chairs remain an optional extra for an additional $1,400.

The Blackout package from the SE Plus is an optional extra on the SXT, as well as the Driver Convenience Group Package. That includes heated front seats, a heated steering wheel, rear window sunshades, and tri-zone automatic climate control. The SXT 35th Anniversary package adds the Driver Convenience Group contents, piano black interior trim, special badging, red stitching on the upholstery and a navigation system.

With all options equipped, a 2019 Dodge Grand Caravan SXT will top out at just over $39,000. Handicapped accessible wheelchair Grand Caravans are available to those who need them and top out at around $45,000.