The Dodge Durango is a large, three-row SUV built by Fiat Chrysler Automobiles. Buyers will likely be drawn to the Durango for its muscle-car persona, drawing on the popularity of the brand's popular Charger and Challenger vehicles, while having the similar stature and capabilities of the largest, most popular SUVs. It's also one of the most spacious and capable three-row SUVs on the market that also offers two V8 engines, giving buyers a choice that is similar in size to car-based crossovers while having abilities that are traditionally reserved for larger, truck-based full-size SUVs.

The Durango is available in seven trim models, SXT, SXT Plus, GT, GT Plus, Citadel, R/T, Citadel Anodized Platinum and SRT. The Durango competes in a class with the Honda Pilot, Toyota Highlander, Kia Sorento, Buick Enclave, Mazda CX-9 and Ford Explorer. The 2019 model year Durango is part of the third generation introduced back in 2011. This model is mostly unchanged but has gained a handful of updates for different trim models. The base model SXT has leather optional now. Cloth upholstery is optional on the GT trim model, the Citadel and R/T model have the option of an 825-watt 19-speaker Harman Kardon premium audio system, the Citadel is equipped with second-row captain's chairs standard. Finally, the trailer tow package now includes an integrated trailer brake.

The Durango is available in 9 different colors, as well as distinctive green exterior paint available only the high-performance SRT model. The styling is reminiscent of the other Dodge muscle car siblings like a cross of the Challenger and Charger. The Durango GT, R/T and SRT have more aggressive looking grilles and bumper styling. 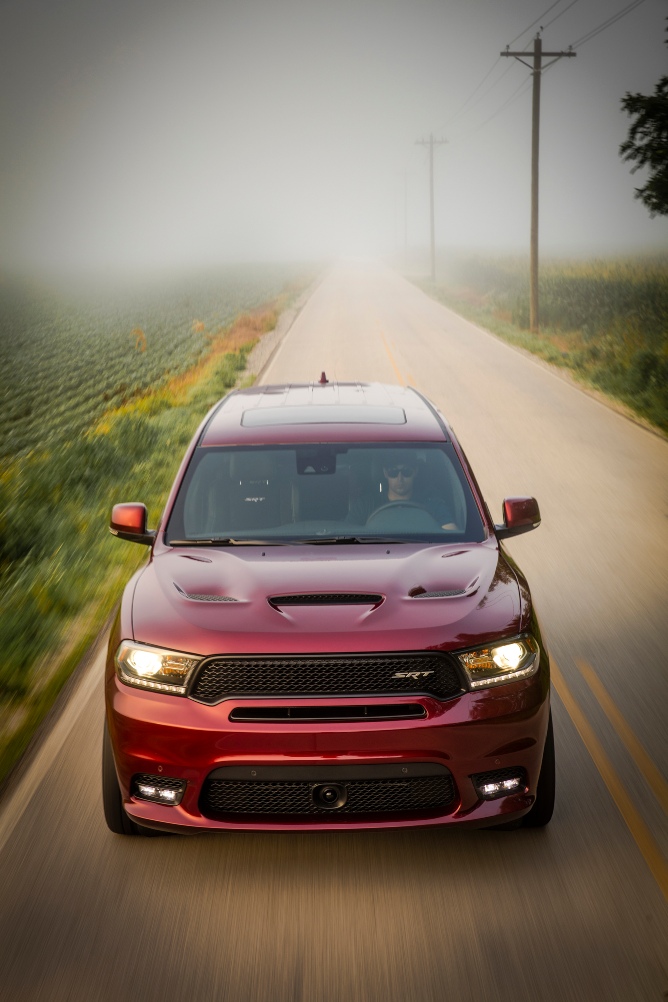 The R/T and SRT have very aggressive hoods that have functional cooling intake vents and heat release openings. The base model SXT comes with 18-inch aluminum wheels and all season tires and projector headlamps standard. The Durango also is equipped with the iconic signature racetrack taillamp powered by 192 LED bulbs that give a legacy Dodge styling trademark a modern twist. On Durango R/T and SRT trim models, buyers can opt for the Mopar dual stripes which provide the Durango with a bold, aggressive look emphasizing the performance capabilities of the powerful V8 engines offered.

The Durango has not been redesigned in years, but some updates have helped keep it competitive. The interior material quality is average and has a fair share of soft-touch sections. Seating is comfortable and supportive in the first two rows however the third row is a toss up as reviewers are split as to whether the third-row bench seats adults comfortably. 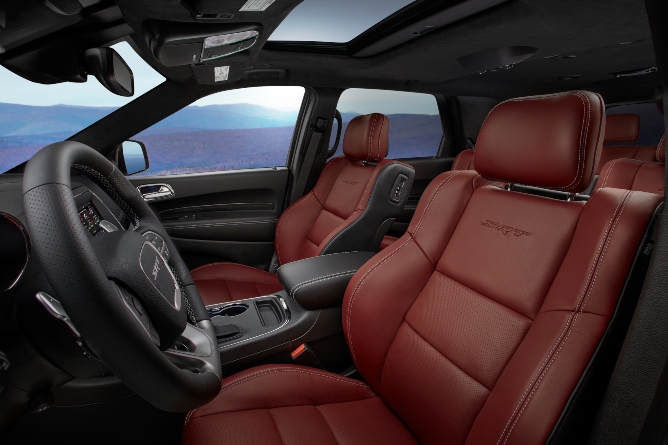 The SXT base model is equipped with cloth interior, and the GT trim upgrades to a power-adjustable driver's seat and a leather-wrapped steering wheel. The R/T model adds more comfort to the Durango with a power front passenger seat, heated first and second-row seats and a heated steering wheel. 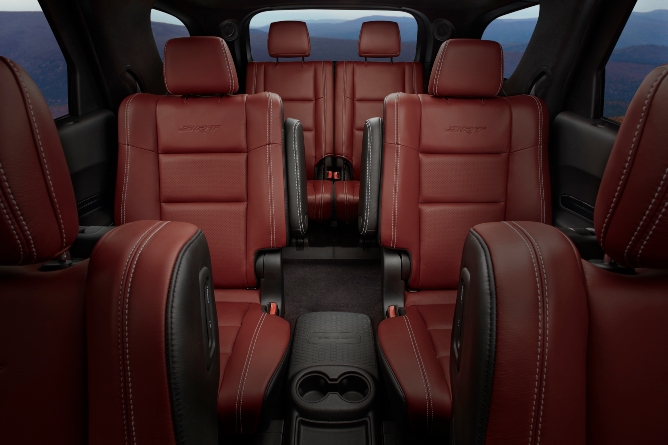 The Citadel trim adds leather upholstery while the top of the line Durango SRT receives leather armrests and center console, while the rest of the upholstery receive Napa leather with suede inserts and ventilated seats. 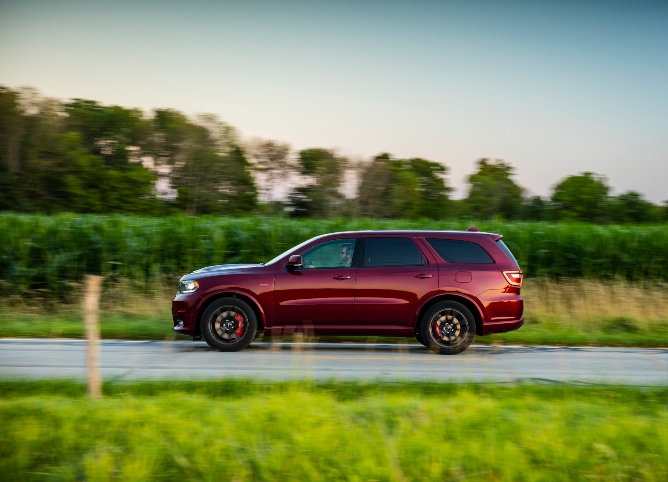 The Dodge Durango is the class leader in towing. The 3.6-liter V6 engine is capable of towing up to 6,200 pounds, the 5.7-liter V8 engine can tow up 7,400 pounds and the flagship Durango SRT has the best-in-class maximum towing capacity of 8,700 pounds. Also standard on Durango is sway control which adjusts brake pressure on alternating wheels and can adjust the throttle to assist correction of sway on the vehicle and trailer. The Durango SXT Plus and both Citadel and Citadel Anodized Platinum trims come equipped with roof rails and integrated crossbars. The Durango GT, R/T and SRT all have the option of adding factory roof rails for an additional $595. 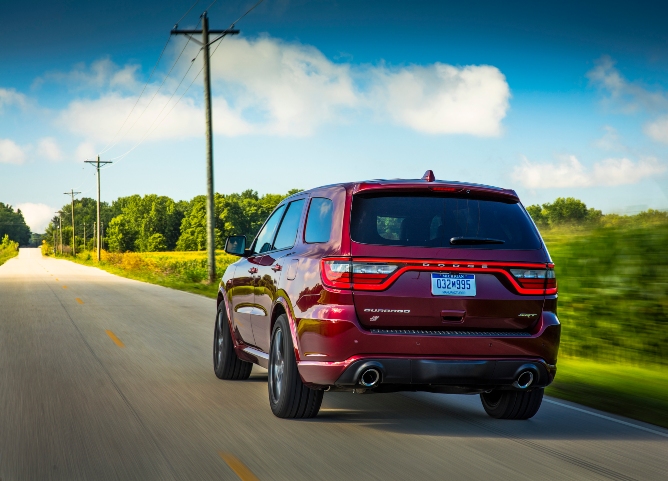 The Durango tech suite Uconnect offers a standard 7-inch touchscreen features Android auto, Apple CarPlay, voice command, Bluetooth streaming audio, Sirius XM, two USB ports and one auxiliary port. An 8.4-inch touchscreen display is optional, as is built-in navigation that also includes additional Sirius apps such as Sirius XM Guardian, Traffic Plus and Travel Link. The standard audio set up consists of a six-speaker audio system, the Citadel trim is equipped with a nine-speaker 506-watt Alpine system with subwoofer, as mentioned earlier new to the 2019 Durango is the optional 825-watt 19-speaker plus subwoofer Harman Kardon audio system which is available on the Citadel trim and ascending trims. 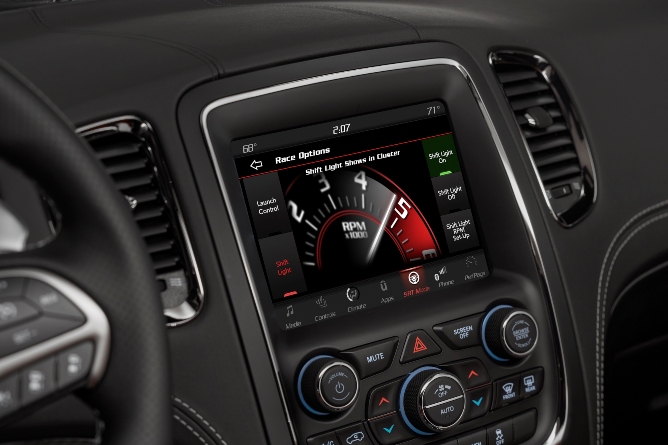 Also available is a rear DVD entertainment system which includes either a single or dual screens mounted behind the front driver and passenger headrests, this package is available on the Durango GT Plus and higher trims.

In crashworthiness for the 2018 model year, Durango received the second-lowest Marginal rating for the driver side and was not rated on the passenger side, from the Insurance Institute for Highway Safety (IIHS). The Durango received a score of Good in moderate overlap front, side, roof strength, head restraints and seats. In the crash avoidance and mitigation portion, the Durango received a superior rating in models with optional equipment. The headlights received a marginal rating because the high beams were inadequate on curves. The last portion is ease of use of the child seat anchors (LATCH) which are rated acceptable. These ratings apply to the structurally identical 2019 Durango.

According to the National Highway Traffic Safety Administration (NHTSA), the Durango has not been rated fully. The only listed ratings were for rollover on the rear-wheel-drive Durango which received four out of five stars, and the four-wheel drive model received three out five stars.

The Durango can be equipped with active safety and advanced driver assistance technologies such as adaptive cruise control with stop, blind spot monitoring, forward collision automatic emergency braking, lane keeping assist and lane departure warning added as an option on each trim model except the base model SXT.

The Durango base model's 0-to-60 mph time was clocked at 8.1 seconds by instrumented tests. This is not very competitive in the class. However, the V8 engines easily out run each all of its competitor in the class. The SRT is noted by other reviewers as "brutally quick," clocking 4.7 seconds in the 0-to-60 sprint.

The Durango is identified as being much more vocal at full throttle than many competitors. However, the interior is a pleasantly quiet cabin that does a good job of canceling road and wind noise.

The eight-speed automatic transmission pairs well with all three engines, it shifts quickly, smoothly and can adapt well to road conditions, downshifts when required and maintains a gear when necessary for efficient climbing and towing.

The Durango is a large, heavy SUV whose suspension straddles between sport and comfort, and this contributes to a smooth ride over bumps. Handling reviews are mixed as some reviewers encounter excessive body roll while turning while others describe reasonable control and minimal body roll. Steering on the Durango is precise, adequately weighted and is comfortable and easily maneuverable at highway speeds.

Fuel economy on the Dodge Durango is sacrificed for performance and towing power. The V6 engine is in the neighborhood of most of its V6 competitors but far from the most fuel efficient. According to the Environmental Protection Agency (EPA), the 3.6-liter V6 engine RWD achieves 19 mpg city, 26 mpg highway and 21 mpg in combined driving. The all-wheel-drive version also has a combined rating of 21 mpg. The 5.7-liter V8 engine all-wheel-drive achieves 14 mpg city, 22 mpg highway and 17 mpg combined. The Durango SRT's high-performance 6.4 liter V8 and all-wheel-drive combination delivers 13 mpg city, 19 mpg highway, 15 mpg combined.

The Durango compares with the following 2019 model year three-row crossovers:

New car buyers interested in the Durango will be forced to decide if they want to sacrifice a bit of fuel economy for class-leading towing capability and power.

The MSRP for the base model Durango SXT equipped with a 3.6 Liter V6 engine paired with an eight-speed automatic transmission, rear-wheel drive, 18-inch aluminum wheels, keyless entry, a rearview camera, and hill start assist is listed $31,690 including a destination fee of $1,495 before packages and additional options.

The Durango SXT Plus trim equipped with the same powertrain receives eight-way power driver seat with four-way power lumbar adjust, roof side rails with integrated crossbars, rear park assist, Sirius XM radio and will raise the total to $35,685 including destination fee before packages and additional options.

The Dodge Durango R/T is equipped with a 5.7 Liter V8 HEMI engine, a performance steering and sport suspension, 8.4-inch infotainment system with Beats Audio premium sound system, performance front fascia and hood bring the R/T total to $45,490 including the destination fee before packages and additional options.