Powertrain: Standard powertrain (base SXT, GT, and Citadel) includes an 8-speed automatic transmission, and a 3.6-liter V6 engine with 295 horsepower and 260 pound-foot of torque.

There are two other engines available:

A 5.7-liter V8 engine with 360 horsepower and 390 pound-foot of torque is an option for Citadel models and standard for the R/T trim.

The SRT model has a powerful 6.4-liter V8 engine with 475 horsepower and 470 pound-foot of torque. This model is only available with all-wheel drive. 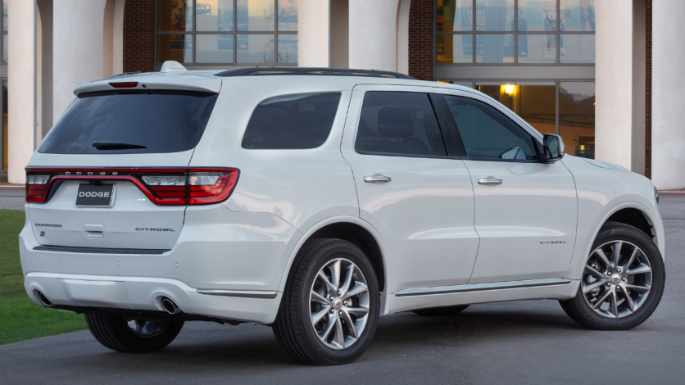 Built-in Detroit, the Dodge brand is famous for its drag-strip-destroying Charger and Challenger muscle cars, so it should not come as a surprise that the 2020 Dodge Durango is the muscle car of three-row crossover-SUVs. The Durango is for the driver who has outgrown their burnouts and entered the phase of kindergarten drop-offs.

Dodge enthusiasts will be familiar with Hemi engines, and while they share as many benefits as the costs they incur, they have largely started to fall out of favor, but you cannot deny that the name still sounds cool. The base model features a 293 horsepower engine, which can be upgraded to 360 horsepower Hemi V8.

The 2020 Durango is almost entirely unchanged compared to previous versions in the years before. The R/T trim has seen some small equipment upgrades, including a new Hemi fender badge for those models with Brass Monkey and Blacktop packages, accent stitching on the instrument panel for models with the Premium interior package, a faux-suede headliner, and new 20-inch wheel design.

When exploring the Durango competition, the Mazda CX-9 does rank slightly higher than the Durango within the mid-size SUV class. The Mazda may lack the muscle power of the Durango's V8 engines, but it makes up for it with better handling and a plush ride.

The CX-9's cabin is praised for its interior quality, but there are some mixed Dodge Durango reviews when it comes down to its cabin quality. The Dodge does step up with its offering of more cargo space, and while both seat up to seven passengers, the third-row in the Durango offers a lot more room and cargo space than the CX-9.

The 2020 Jeep Grand Cherokee is a popular rival of the 2020 Durango, and both are closely matched with the same starting horsepower of 293. They also share the same fuel economy with an EPA of 19/26 mpg for city/highway. The Dodge does overtake with a slightly higher towing capacity of up to 8,700 pounds, whereas the Grand Cherokee has a towing capacity of up to 7,200 pounds.

All new Durangos come standard with a typical Dodge warranty with extended warranties available to purchase through dealerships. Most mid-size SUVs offer the same coverage as the Durango; however, GMC and Toyota provide two years of complimentary scheduled maintenance, which is an added expense for Durango buyers. The limited warranty covers three years or 36,000 miles, and the powertrain warranty covers five years or 60,000 miles. 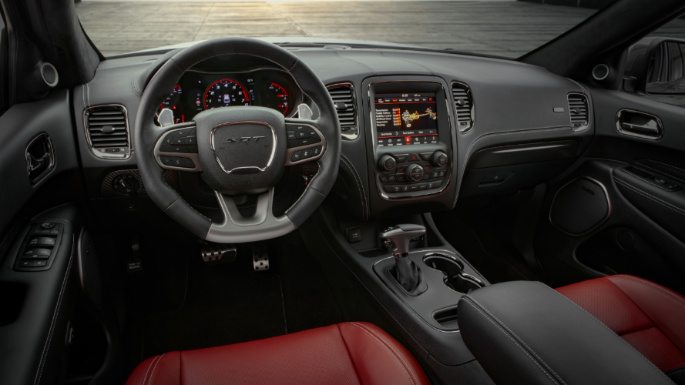 The National Highway Traffic Administration gave the 2020 Durango an overall safety score of four out of five stars. Four stars were earned for the frontal crash test, and five stars were received in the side crash test. RWD models earned four stars in the rollover test, while all AWD models only received three stars.

The Insurance Institute for Highway Safety has given the Durango the highest rating of Good in four crash tests and the second-lowest rating of Marginal for the driver's side small overlap front test. The headlights also received a Marginal score.

Overall, from the IIHS, the Durango earned the highest rating of Superior for front crash detection system. 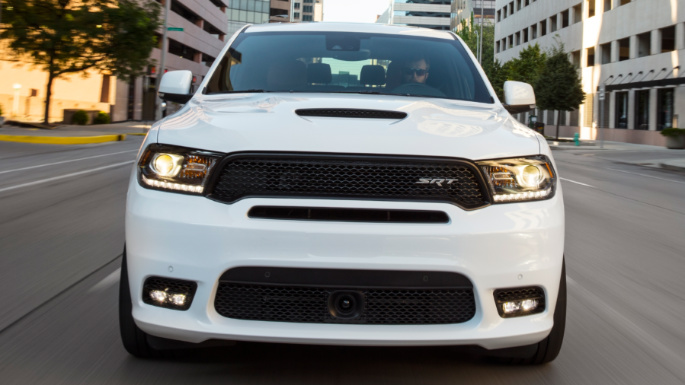 The Durango V8 models can be obtained under the $50,000 range but, should you decide on the V6 option, then it does fall within the average mid-size crossover SUV price range and competes well with the Ford Explorer.

Unfortunately, when it comes down to resale-value, the Durango is not a keen performer and falls below the Toyota Highlander. It does, however, have a better resale value than the Chevrolet Traverse.

Considering the minor changes, for a slightly lower price, many consider the nearly identical 2018 or 2019 Durango models.

The price tag offers good value for money, considering the Durango is a family-friendly SUV that is easy to use daily and fun to drive. 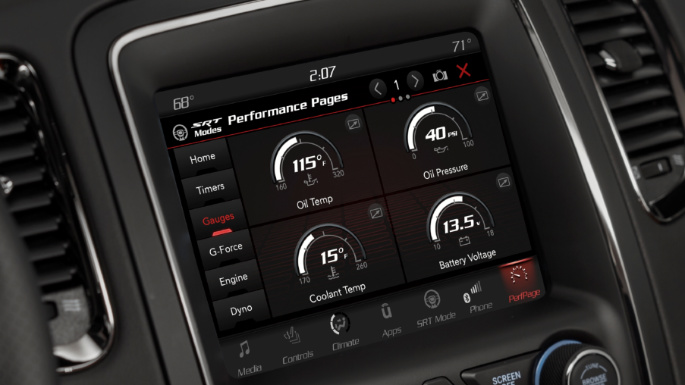 All models come standard with the Uconnect 4 infotainment system, one of the best systems on the market, overtaking many of Durango's rivals, especially when selecting the optional 8.4-inch touchscreen.

Bluetooth phone connectivity is a standard feature across all trims and is praised for its good audio quality.

Apple CarPlay and Android Auto are a standard feature that allows smartphone users to access their mobile phones through the touchscreen.

The interface is user-friendly with the choice of using large control knobs on the center stack or the touchscreen to control everything. 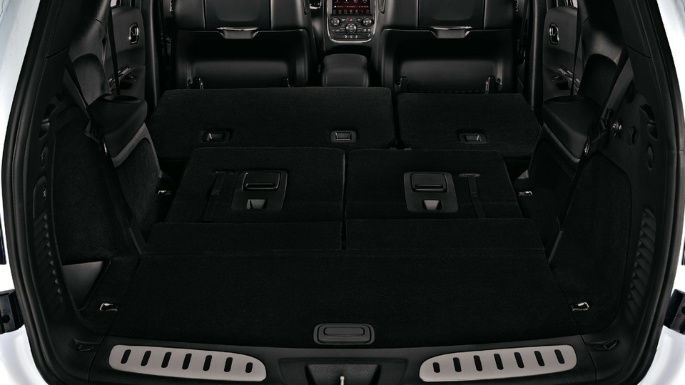 The Durango comfortably seats five people. The third-row is optional in the base trim, but it is standard across the other models and increases the seating capacity to seven.

The first-and second-row seats are comfortable, and the third-row of seats is easily accessible. Adult passengers can comfortably sit in the third-row with enough space.

The cargo space is average when compared to other midsize crossover SUVs. There is 17.2 cubic feet of space behind the third-row of seats and 43.3 cubic feet when the last two rows are folded down. The Ford Explorer and the Mazda CX-9 have less cargo space.

In keeping up with the bold statement Dodge makes with its unique design and styling, the 2020 Durango has kept its "racetrack"-shaped taillight, bold paint colors and graphic decals, and massive wheel-and-tire combos.

The base SXT has a bold and decisive appearance that sets it apart from other midsize SUVs. The GT and Citadel look meaner, and the R/T looks like a Charger on steroids with its SRT-style hood and large air scoop.

The entry-level trim features 18-inch alloy wheels, and 20-inch aluminum wheels are standard for the GT.

Overall there are minimal changes to the exterior design of the 2020 Dodge Durango. 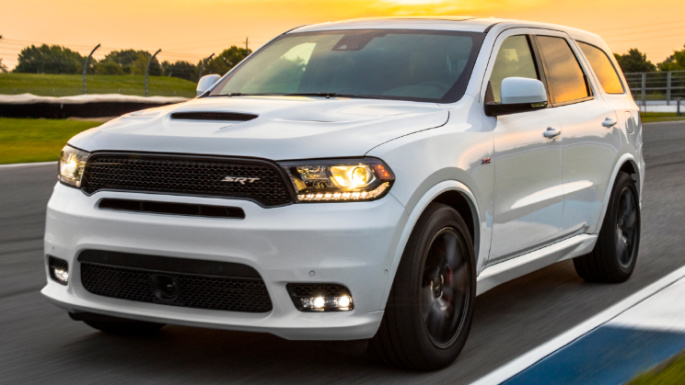 The Durango is a large SUV and undoubtedly drives like one. It can feel lumbering and heavy around corners, and there is minimal feedback from the road with the slow steering.

The ride quality is excellent over harsh and uneven surfaces, and very little wind or road noise enters the cabin.

When easing off the throttle, the Durango offers a comfortable and smooth ride, with the 8-speed automatic transmission occasionally searching for the right gear. 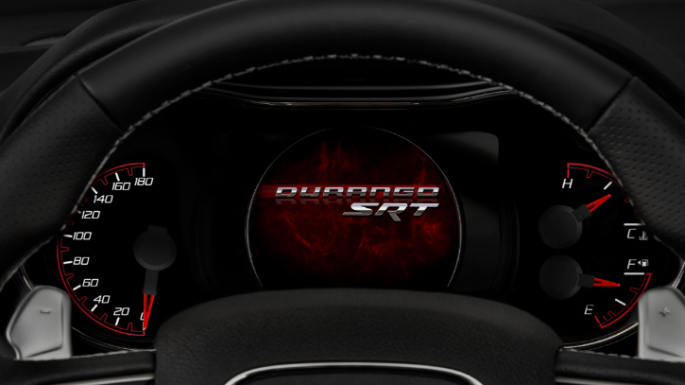 The standard V6 engine on the base SXT and RWD gets an EPA estimate of 19 mpg in the city and 26 mpg on the highway. The AWD model lowers those numbers to 18 mpg city and 25 mpg highway. Both these ratings are average for a V6-powered crossover SUV.

Opting for the V8 engine provides a poor fuel economy for the sporty models with a 5.7-liter engine returning 14/22 mpg city/highway, and the 6.4-liter comes in at a dismal 13/19 mpg city/highway.

The Durango is a proud Dodge muscle car; there are no four-cylinder engines or a hybrid option available, but the V6 is on par with its competitors' fuel consumption. 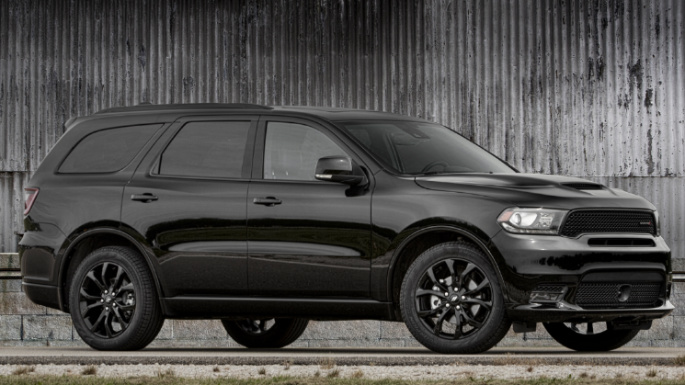 The third-row seating is an optional extra and will cost $1,095.

The SXT Plus starts at an MSRP of $34,590 and includes all the standard features of the base SXT as well as an eight-way power-adjustable driver's seat, and the third-row of seats are a standard feature.

The SXT Plus gives you access to optional features, which include:

The Durango GT starts at an MSRP of $34,645. In addition to sharing the same features and engine as the base model, it also includes a fold-and-tumble second-row bench seat, rear parking sensors, satellite radio, auto-dimming rearview mirror, LED fog lights, 20-inch aluminum wheels, and a universal garage door opener. The infotainment system can be upgraded to include an 8.4-inch screen and navigation for $995.

At a starting MSRP of $38,995, the Durango GT Plus includes leather and suede upholstery, remote start, and a power liftgate in addition to the standard features of the GT. For $1,395, you can add the Safety/Security and Convenience Group package, which provides automatic high-beam headlights, a power tilt-and-telescoping steering wheel, HID low-beam headlights, and rain-sensing windshield wipers.

At $2,495, the Premium Group package offers a nine-speaker Alpine stereo system, an 8.4-inch touchscreen with navigation, and a sunroof.

The high-performance Dodge Durango R/T starts at an MSRP of $43,995 and has a 5.7-liter Hemi V8 engine. This sporty model features a performance-tuned steering and rear load-leveling suspension.

If the R/T does not offer enough power or performance, then the Dodge Durango SRT is the range-topping high-performance trim that starts at an MSRP of $62,995 and has a 6.4-liter Hemi V8 engine with 470 pound-foot torque and 475 horsepower. It comes standard with AWD and high-performance features. This vehicle is in a class of its own and offers a full powerhouse of features for any sports car enthusiast.

If we were in the market to purchase a 2020 Dodge Durango, then we would opt for the all-wheel-drive GT model. The V8 engines are great, but the V6 GT provides more than enough power without the price increase or heavy fuel consumption. Preference would lie in the AWD GT model with its standard power-adjustable driver's seat for added comfort and the standard third-row seats.