The Cadillac Escalade is a full-size, truck-based SUV from General Motors that has shared much of its underpinnings with the lesser Chevy Tahoe and Suburban and the GMC Yukon.

It competes against other full-size luxury SUV heavyweights, including the Range Rover, Toyota Land Cruiser, and its Lexus LX cousin, Lincoln Navigator, and Infiniti QX80.

Though it was initially regarded as a wannabe luxury SUV when it first launched, over the years, it stopped playing catch-up and became a status symbol, popularized in movies, music videos, and celebrities’ driveway. Some even see the “Escalade” badge as now having more brand cache than “Cadillac,” given the rest of the brand’s vehicle lineup. 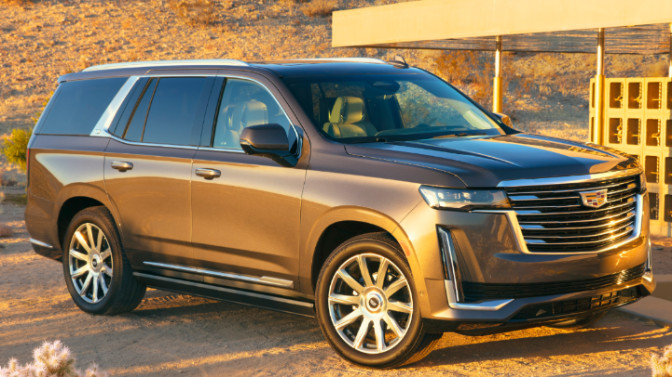 This fifth-generation model moved up into the upper echelon of luxury SUVs, thanks to some significant changes to improve its standing as the brand’s flagship vehicle.

Along with more sweeping lines on the outside and a more car-like grille, the new Escalade boasted much more advanced technology. A new rear independent suspension made it possible to significantly increase interior space, especially for the third-row seat and cargo area.

Height-adjustable air suspension, a feature found on the Range Rover, was also introduced for improved access.

While the main powertrain combination continued to be a 6.2-liter V8 with 420 horsepower and a 10-speed automatic transmission, a new offering was a 3.0-liter six-cylinder turbodiesel with 277 horsepower, a first for the Escalade.

Inside, however, Cadillac upped the Escalade’s luxury game. The interior was dominated by two vast screens, with the instrument panel replaced by a curved OLED screen and the infotainment system operated by either touch or a control knob.

The column shifter was replaced by one mounted on the console, too. Lots of real wood and leather covered many of the surfaces, and a 36-speaker audio system was a new option.

Cadillac’s Super Cruise automated hands-free driving system was a new option to further bring the Escalade into the 21st century.

For 2023 Cadillac added the Escalade-V, a high-performance version of the three-row SUV with a monstrous 6.2-liter, supercharged V8 that makes 682 horsepower and 653 pound-feet of torque. That immense power is routed through a ten-speed automatic transmission and all-wheel-drive.

GM says this ultra-Escalade can do 0-60 MPG in less than 4.4 seconds (so 4.3?) and costs $150,000 before any options. Other goodies include adaptive dampers and air springs for the chassis, and a variety of drive mode settings. 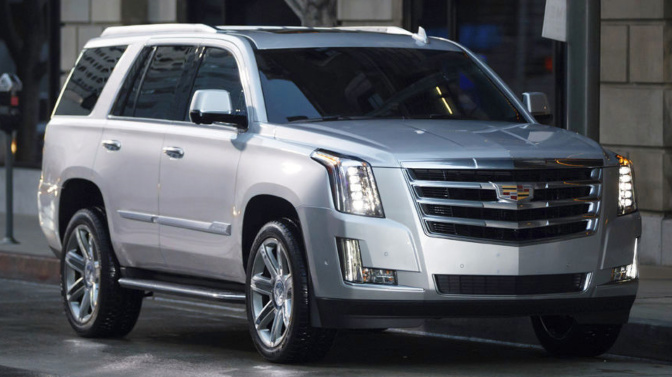 The Escalade again gained some new mechanicals for its fourth iteration, as well as more flashy trim to appeal to its loyal clientele.

For 2015, the exterior gained a new grille and some cues from Cadillac sedans of the era, but it was a little bit of more of the same compared to the previous generation.

Under the hood, a 6.2-liter V8 continued to be the only engine available, but it now had 420 horsepower and features such as cylinder deactivation to improve fuel economy in any way. A six-speed automatic was the initial transmission, but it was replaced in 2016 with an eight-speed model, and then in 2018 with a 10-speed model.

Two and four-wheel-drive continued to be offered, as did two different lengths. A magnetic ride control system was also new.

The interior, however, much more closely resembled Cadillac’s sedans with a standard touchscreen infotainment system called CUE. It also incorporated touch-sensitive buttons for the audio and climate controls. A surround-view camera and 4G LTE wi-fi were also new features.

The instrument panel was also a new configurable setup, with a 12.3-inch TFT display replacing physical dials and gauges. Over its run, new driver assistance technology would be added, such as automatic high beams, blind-spot warning, and lane-keep assist. 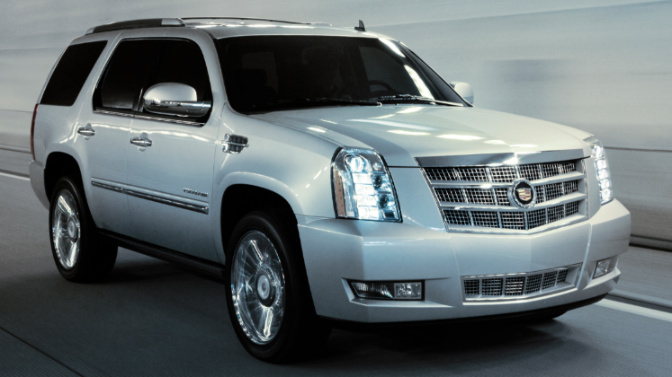 With a new line of full-size SUVs coming, Cadillac updated the Escalade again for 2007. The third-generation model featured even more differentiation than the Chevrolet and GMC models than before, elevating the Escalade’s luxury quotient as it started to compete with models from Lexus and Land Rover, not just Lincoln.

The exterior featured Cadillac’s latest grille design, larger than before. The whole design was smoother than before and now featured LED rear lights. It was offered in two body lengths again.

Inside, the Escalade’s dashboard was different from the other GM full-size SUVs and more car-like along with standard leather and wood.

A large touchscreen dominated the dashboard and could now be had with built-in navigation. Features such as cooled seats and a rear entertainment system continued, while a power liftgate was new. An upgraded Platinum Edition added the heated and cooled cupholders, backup camera, and power-retractable running boards.

Escalades were now powered by a 6.2-liter V8 with 403 horsepower and a new six-speed automatic, with rear-wheel-drive or all-wheel-drive.

Beginning in 2009, buyers could opt for a hybrid powertrain. This gas-electric combination used a 6.0-liter V8 paired with two electric motors for a combined 379 horsepower and slightly better fuel economy. It lasted until 2013.

And apart from equipment tweaks and updated technology, the Escalade went largely unchanged for seven years. Cadillac had a new flagship, and it wasn’t a big sedan – it was an enormous SUV. 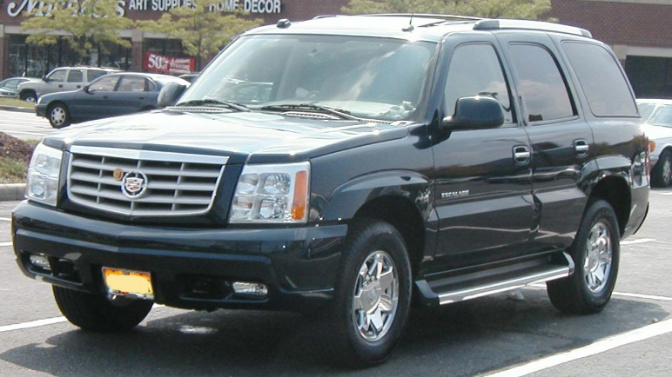 While the first-gen Escalade didn’t set sales records, it did garner some attention for Cadillac in the SUV market. When the second-generation debuted in early 2001, Cadillac put more effort into it to make it bolder and separate it from the GMC Denali. That’s why the 2002 Escalade featured a vastly different front end, somewhat inspired by concepts at that time and the then-new 2003 CTS sedan.

Inside, the interior still had the basic shape of GM’s full-size trucks and SUVs but added Zebrano wood trim, upgraded leather upholstery, and even a Bulgari clock, all things lifted from Cadillac’s sedans of the time.

While the Escalade had been based solely on the standard-length Tahoe and Yukon, the 2003 Escalade ESV offered buyers more space thanks to a body shared with the Suburban and Yukon XL, but similarly appointed to the standard-length models. This stretch version added roughly 20 inches to the Escalade’s overall length, and more than doubled its cargo space to 39.3 cubic feet. 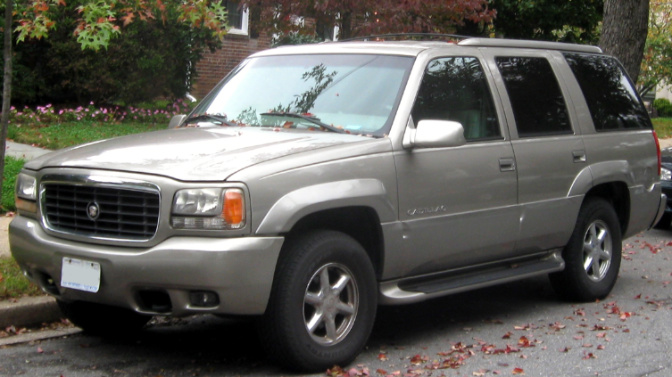 The Cadillac Escalade debuted for 1999 as a hasty response to the success of the Lincoln Navigator and the booming luxury SUV market of the late 1990s. Cadillac’s first SUV came as a shock of some of its loyalists, but it had some typical brand touches, even if it wasn’t exactly tailor-made for General Motors’ premier nameplate.

The first Escalade was based on GM’s full-size SUV platform, and it was closely aligned with the recently introduced GMC Yukon Denali.

Cadillac took the most luxurious Yukon and added a new grille and little else on the exterior besides Cadillac logos. Every option was made standard on the Escalade, including upgraded leather upholstery with the Cadillac crest embroidered on the front seats, wood trim, a top-level audio system, three-zone climate control, and GM’s OnStar telematics system.

Two models were offered, one rear-wheel-drive and one with push-button four-wheel-drive. Both featured the 5.7-liter V8 with 255 horsepower.