The 2019 model receives several alterations. Acura says the automatic transmission has been reprogrammed to provide a more refined driving experience. There is now a standard engine start/stop system and available adaptive suspension dampers.

Additionally, several new paint colors, new wheel options, and the A-Spec appearance package – which comes with exclusive interior and exterior trim and styling upgrades – are now available.
The MDX is a descendant of the Honda Pilot, its parent company's comparably sized SUV, but with a much more refined and luxurious presence.

It fits into its higher price bracket well, with many more standard safety features, an upscale appearance, and a hybrid powertrain option. The MDX accomplishes its goals of offering a luxury driving experience with an engaging touch for those who want a bit more "sport" out of their sport utility vehicle.

Even without moving, the MDX looks solidly built. Its lines are smooth, and traditional styling cues are used in place of the increasingly sharp body lines used in many vehicles today. 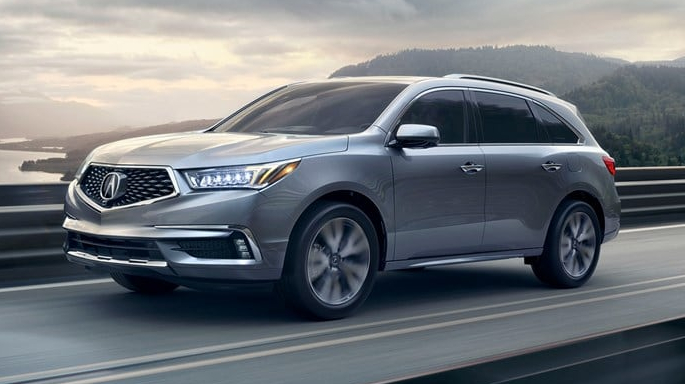 Its front fascia is reminiscent of a huge smiling face. Distinctive crystal-like LED headlights, a large grille and non-functional bottom grille pieces will vaguely remind customers that the MDX is a close cousin to the Honda Pilot.

The rear of the MDX is the least stylistically-inclined area of the vehicle. There are no surprises as the large taillights again are also reminiscent of the Honda Pilot. Stylish exhaust tips and a rear diffuser finish off the vehicle's refined appearance.

The side profile reveals the best lines of the vehicle. A slightly swept-back roofline, several subtle character lines, and a large D pillar distinguish the MDX from larger and boxier competitors. The roof provides the side windows with an umbrella-like line, curving sharply downward toward the rear of the vehicle. Its beltline is high and does not rise toward the back of the vehicle as dramatically as in other vehicles. 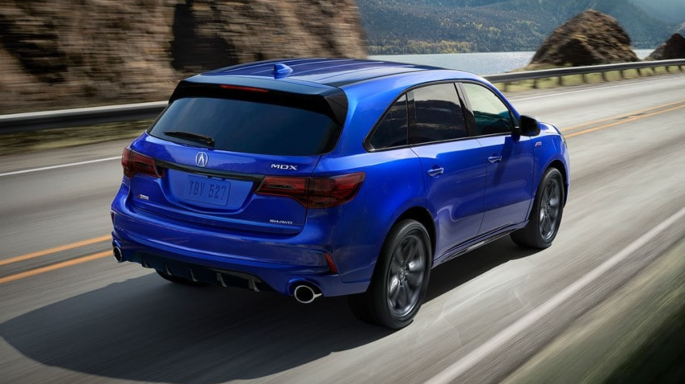 Because of its proportional head and taillights, its lack of over-styled grille, and lack of overly fussy character lines, the MDX looks like a small tank. Its thick rear D-pillar adds an extra secure feel to the canopy, and the high beltline provides passengers quite a bit of metal between themselves and everything outside.

The new A-Spec package adds a sporty feel to the SUV. It uses black trim pieces in place of chrome to show that it means business. Large 20-inch wheels fill out the wheel wells nicely, though the standard 18-inch wheels are still adequate for the size of the MDX.

Interior quality is an area in which the MDX falls behind its competition. Most reviewers agree that interior materials are not on par with the competition and do not suit a luxury SUV at this price point. 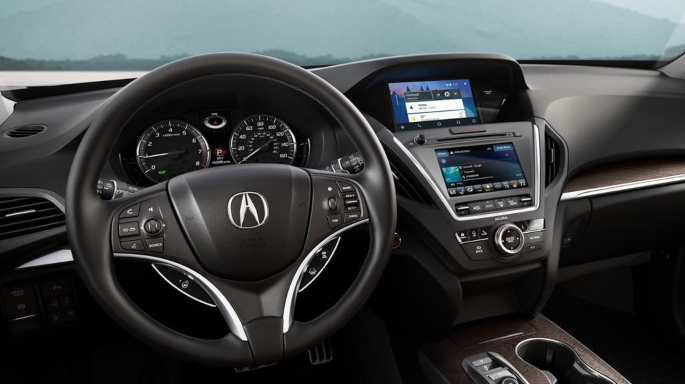 Though many say that fit-and-finish is good, most note that comparable BMW, Audi, Mercedes Benz, and Volvo models feature a much nicer interior feel and layout.

Comfort makes up for many of the interior's shortcomings. Reviewers praise the seat and ride comfort of the MDX, especially with the optional adaptive dampers. Driver's seat adjustability is particularly highly-rated among MDX testers, with good visibility to boot.

Interior space is ample, though reviewers note that third-row seating is tight for adult passengers, and second-row headroom can be an issue with taller people. No tester has any complaints about the front seat or second-row legroom. 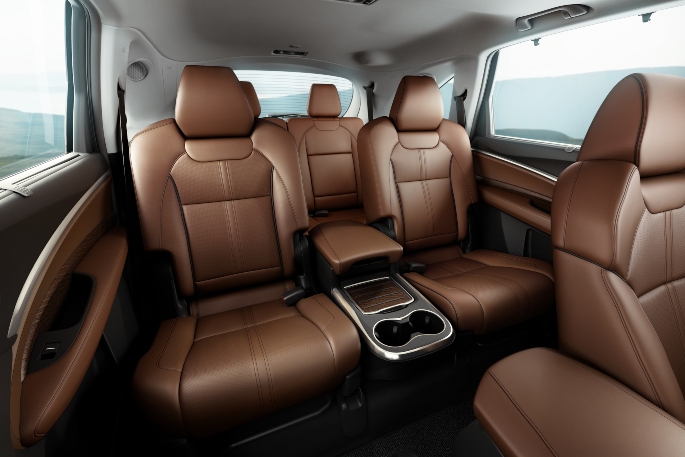 Some fussy ergonomics are noted to downplay some of the driver and passenger comfort. Reviewers note that the gear selector, climate controls, and infotainment system can be challenging to navigate and operate, detracting slightly from their ease-of-use.

Utility and practicality are both areas in which the MDX shines. 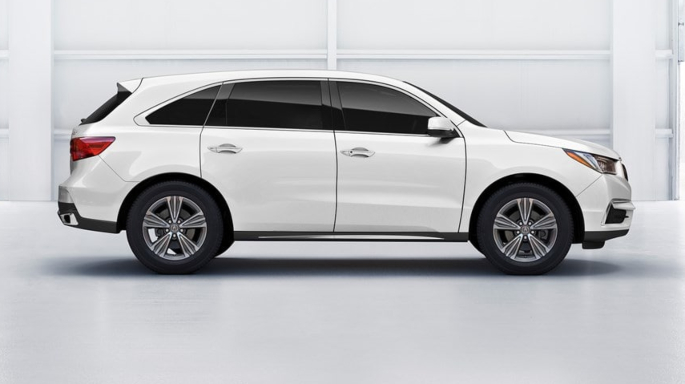 A power liftgate, fold-flat rear seats, and additional cargo under the load floor give the MDX some added ability to stow cargo with no problems. A reasonably low load floor with a low liftover height aids even more with access to the cargo space.

Roof rails and a crossbar rack system allow for the possibility of additional storage for larger items. Plenty of interior storage bins throughout the cabin allow for smaller, essential items to be kept in the vehicle at all times with space to spare.

Towing capacity is rated at 5,000 pounds, which is suitable for the class. 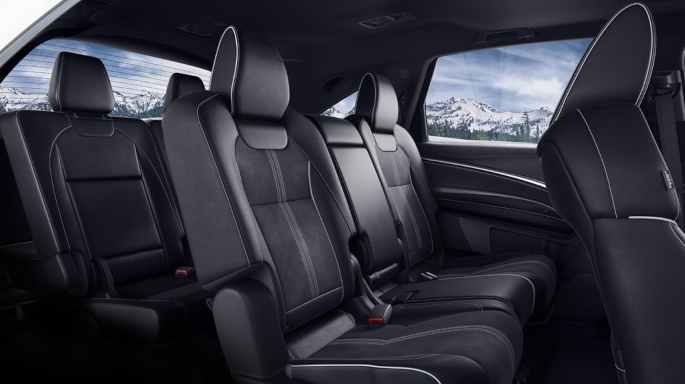 Reviewers find it easy to get in and out of the MDX with its wide door openings. Second-row captain's chairs are noted by reviewers to provide easier access to the third row than the bench seat option.

One of the best and most universally praised utility features of the MDX is its Super-Handling All-Wheel Drive system – SH-AWD for short. Though the MDX is not an off-road vehicle, reviewers universally praise the SH-AWD system for its torque-vectoring feature, handling abilities, and adverse weather capability.

The Acura MDX is loaded with standard technology beyond its SH-AWD system. 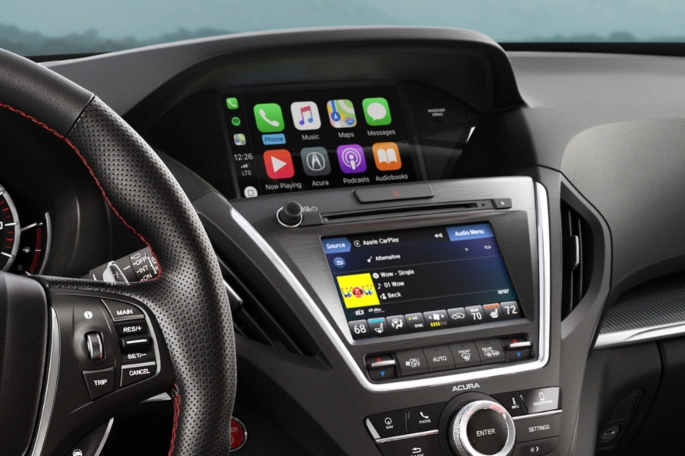 The standard infotainment system comes in the form of a dual-screen, 7-inch touchscreen display with Apple CarPlay and Android Auto connectivity capability and voice control.

Reviewers criticize the dual-screen infotainment system for being overly complicated, but they also note that it becomes easier to navigate over time. Most agree that even at its best, it is far from the top system the class has to offer.

The Acura MDX is a very safe vehicle. Not only it is available with many of the top active safety features available today, but it also earns high scores in NHTSA and IIHS crash tests.

Reviewers note that while the MDX offers a great variety of safety features, many prove to be unrefined and finicky in real-world driving. Most were especially unimpressed with the adaptive cruise control and overly responsive automatic emergency braking system.

The National Highway Traffic Safety Administration has awarded the MDX a five out of five-star crash rating, and the Insurance Institute for Highway Safety awarded it the highest overall score for all of its tests.

Reviewers are impressed with the overall performance of the MDX. Its handling characteristics are universally praised, and its engine is strong, despite not offering a turbo option.

There are two engine options available for MDX buyers.

All non-hybrid MDX models, except the A-Spec, come standard with front-wheel-drive and all are paired to a 9-speed automatic transmission. Acura's Super Handling All-Wheel-Drive system is optional on each trim level.

Reviewers praise the competence exhibited by the MDX during cornering. Most attribute this to the complex all-wheel-drive system, with its electronic torque-vectoring capability. The adaptive suspension damping system also helps with on-road confidence, according to reviewers.

The adaptive dampers also assist when spirited driving is kept to a minimum. Reviewers agree that the MDX is only slightly hindered by the occasionally sluggish 9-speed transmission when driving around town or during regular commuting.

Acceleration is noted to be better than average for the class. Braking is less noteworthy, according to reviewers. Many do not feel confident with the inconsistent grip provided throughout pedal travel.

The standard stop/start system is a point of contention among reviewers. They note that its slow response time can make for an inconsistent in-town driving experience, but most are also pleased that it can be turned off.

Steering feel is a noted upside to the MDX as well. Reviewers appreciate the amount of weight and feedback the electronic steering provides, especially for the class.

The Acura MDX is one of the class leaders when it comes to fuel efficiency.

It is a safe vehicle, earning top picks by both the NHTSA and IIHS. In addition to its standard active safety features, buyers can also opt to add most others which are currently available on the market.

Performance is another strong point of the MDX. Not only does it handle well, but its SH-AWD system is widely regarded as one of the best systems in the class by reviewers. The A-Spec trim package adds some flair to its performance by jazzing up its looks and switching chrome trim with black.

Space, utility, and practicality do not come in at the top of the segment, but all three are represented more than adequately for the average family. Buyers who want the most amount of space or who have a larger-than-average family will have to look elsewhere because of the reportedly cramped third row.

Criticisms that may also bring down the perceived value of the MDX include the confusing infotainment system, ergonomically unpleasant controls, the lack of superior interior feel, and its lack of superior second and third-row passenger space.

The naturally-aspirated 3.5-liter V6 engine is standard on all non-hybrid MDXs with a 3.0-liter V6, along with two rear electric motors, coming standard on all hybrid models.

Rather than trim levels, the Acura MDX is available with five different package options.

The MDX Standard starts at $45,295, including a destination fee of $995. Adding all-wheel-drive is a $2,000 option, while the Sport Hybrid is not available for the base MDX.

The MDX Technology starts at $50,295 with destination fee included. All-wheel drive is once again a $2,000 optional upgrade while the Sport Hybrid powertrain is an additional $3,500. Its standard equipment builds on the base model's.

The MDX Entertainment starts at $52,295, including destination fee. The Entertainment package is unable to be paired with the hybrid powertrain and features all the equipment from the Technology package.

The MDX A-Spec is the only non-hybrid option which comes standard with Super Handling All-Wheel-Drive. It starts at $55,795 with destination included. It is not compatible with the Entertainment or Advance packages.

The MDX Advance is the top-of-the-line package level and starts at $57,045, including destination fee. All-wheel-drive is a $2,000 option, and the hybrid powertrain adds $3,500 to the price. The Advance is compatible with the Technology and Entertainment packages.

When paired with both the Technology and Entertainment packages, the Advance adds a 12-speaker ELS audio system and a larger 16.2-inch rear entertainment system screen.

Fully-loaded, an Acura MDX Advance with both Technology and Entertainment package options can cost over $60,000.